How Bugs Bunny Saved Mel Blanc's Life Content from the guide to life, the universe and everything 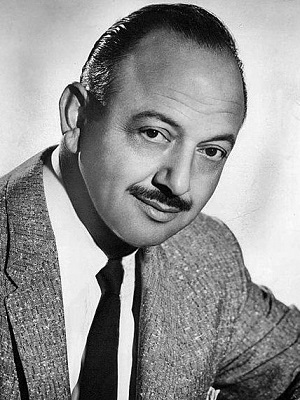 You may not think you know Mel Blanc (1908-1989), but you probably do. If you understand English, and no matter what country you hail from (unless, of course, you've never seen a 'Looney Tunes' animated cartoon, either on television or the Internet, or in a cinema) Mel's voice will be instantly familiar in all his many guises.

I tawt I taw a puddy tat.

Mel Blanc was the voice for Bugs Bunny, Tweety Bird, Sylvester the Cat, Daffy Duck, Porky Pig, Foghorn Leghorn, and so many others. Not for nothing was Blanc called 'The Man of a Thousand Voices'. This was literally true. Voice acting was a very marketable skill in Blanc's day. At one time, he did eighteen radio shows a week. Running from place to place was a normal way to spend the day for this genial man.

Running from place to place is what got him into what Daffy Duck would have called 'a revolting predicament'. But Bugs, Sylvester, and the whole gang helped him out, as you shall hear.

It was 24 January, 1961. As usual, Mel was rushing from one recording session to another, driving down Sunset Boulevard in his fly-but-flimsy Aston Martin. He had a collision with a teenager in a much sturdier vehicle at the aptly-named 'Dead Man's Curve'. The teenager escaped with minor injuries. Mel, on the other hand, landed in hospital with broken legs and pelvis, and a multiple skull fracture. Worse, he was in a coma.

Mel's family tried to talk to him. No answer. Medical people tried to reach him. There was no response. Finally, about 14 days after the accident, Mel's neurologist had an idea. He asked, 'Bugs Bunny, how are you doing today?'

Everyone was startled by the familiar voice. 'Myeeeeh. What’s up doc?'

Next, the doctor asked to speak to Tweety Bird. Tweety claimed to have seen a Puddy Tat. Down the list they went, talking to Sylvester and Porky and Yosemite Sam.

Then Mel Blanc, owner of all these voices, woke up. He wanted to know what happened – and whether the other driver was okay.

Recovery was long and difficult. He didn't stop working, though: the entire cast of The Flintstones gathered in his hospital room so that they could record together with Barney Rubble. In March, he returned home, and recording equipment was set up at his house. Mel appeared on Jack Benny's Christmas special in a wheelchair, still in a cast. Life went on, thanks to Bugs and his friends. Mel's son Noel, who had 'ghosted' a few of his father's characters in his absence, rejoiced.

How Did Bugs Speak?

How was this possible? Neurologists think they may have an answer. One theory is that in order to create all these wonderful voice characters, Mel Blanc created spaces for them in his mind. In order to 'switch' from one to another, he let them take over on cue. By 'feeding' Mel a line – talking to 'Bugs' – the doctor had cued in a response. The cartoon characters were in an undamaged part of the artist's brain. This allowed a sort of 'back-door' access to the rest of his brain, and Mel was able to take control and wake up again.

On an episode of the US biographical programme This Is Your Life, the doctor was asked how he thought this form of communication was possible. 'It seemed like Bugs Bunny was trying to save his life,' he replied.

Mel Blanc went on to make a full recovery, and went back to doing what he did best.

Who Had the Last Word?

In 1989, Mel went into the hospital with a bad cough. At first he was expected to recover. Unfortunately, he turned out to be suffering not only from emphysema, but also from cardiovascular disease. His condition worsened when he broke his femur in a fall from his hospital bed. He died on 10 July, 1989, at the age of 81.

His son Noel recalls that his father's last words to him were, 'I love you, Noel' – spoken in the voice of Yosemite Sam. The last word of the great voice artist to the public, though, went to Porky Pig. Not only were Porky's words the last he recorded, but by his own request, they were carved on his tombstone:

Listen to a radio version of the Bugs Bunny/Mel Blanc story, complete with interviews by Noel Blanc and the attending physician, at Open Culture.

Listen to Mel as he lends his patriotic voice talents to a 1956 Re-Enlistment Drive by the US Army.

Listen to more Mel Blanc at an mp3 archive.