The History of Aston Martin Content from the guide to life, the universe and everything 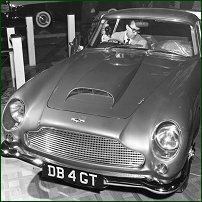 Say the name Aston Martin and what does it conjure up? An elegant car for a secret agent, full of gadgets and machine guns, rocket-launchers and ejector seats; or a hand-built, high-powered, high-priced sports car with questionable reliability? So come with us, dear reader, as we travel the road from two men and a shed to international motor company.

In 1913, a man called Lionel Martin had a passion for the burgeoning sport of motor racing and wanted to turn his love of the sport into a business. He teamed up with Robert Bamford to sell Singer cars. The two men started adapting the cars for the tough up-hill challenges that were an integral part of the early years in Motor sport; after this the pair wanted to manufacture cars of their own and for that they needed a name. Lionel Martin regularly competed in climb challenges at the Aston Hill course and so the name for their cars was born. Martin was quoted as saying:

A quality car of good performance and appearance: a car for the discerning owner driver with fast touring in mind, designed, developed, engineered and built as an individual.

In 1914, Bamford and Martin Limited bought its first premises in Chelsea, London and by March, 1915 the first Aston Martin race car was registered. Fitted with a Coventry simplex side-valve engine and built to Martin's specifications, it became known as the 'Coal Scuttle'. In 1920, they moved their premises to Abingdon Road, South Kensington and with the financial help of Count Louis Zborowski1, an automobile engineer and early racing driver, they built two racing cars that competed in the 1922 French Grand Prix. The Aston Martin cars were now establishing their racing credentials. On 24 May, 1922 one of the cars, known as a 'Bunny', broke ten world records at the Brooklands track during a sixteen-and-a-half-hour endurance run, averaging a speed of 76.04mph.

In 1925, Lionel Martin left the company. By then the major shareholders were the Charnwood family and by 1926, Lord Charnwood had joined forces with Augustus Cesare Bertelli and William Somerville Renwick to form Aston Martin Motors at their new premises in Victoria Road, Feltham, Middlesex. In 1929, the Aston Martin International model had made a name for itself, establishing new standards for road-holding and handling; the racing version of the car helped Bertelli remain competitive in that year's Grand Prix calendar. In 1932 Bertelli and Pat Driscoll won the Biennial Cup in that year's Le Mans 24-hour race and towards the end of the year Aston Martin changed hands yet again, this time to Sir Arthur Sutherland and his son Gordon who managed the company. In 1947, David Brown bought the company and the 'DB' era began.

In 1947 David Brown paid £20,000 for Aston Martin after spotting an advertisement in The Times for a 'high class motor business', and then acquired Lagonda the following year. Lagonda's founder Wilber Gunn started his engineering career by building an engine for his bicycle; motorcycles and tricars followed. Like Martin and Bamford, Gunn quickly became involved in motor sport and regularly took on the Aston Martins in the early Grands Prix and in 1935 a Lagonda won the Le Mans 24-Hour race.

In 1950, Aston Martin produced the 2.6 litre DB2; it took equal first in the Index of Performance in the Le Mans race and won the 3.0 litre class. By now, the factory had moved down the road to Hanworth Park: the bodies of both the Aston Martin and Lagonda cars were built there while the engines, gearboxes and chassis were produced at Brown's factory in Farsley, Yorkshire. In 1951 the company produced the DB3, the first production car to feature disc brakes, even though the Aston Martin cars were still primarily built for racing. The DB3 was a rather heavy car for racing purposes so they developed the DBR3 which was a lot lighter and left the DB3 pretty much as a production car. Throughout the 1950s Aston Martin had phenomenal success in racing with the DBR1/300, the DBR3 and the DB4 but the rise in costs in running a race team was taking its toll and in 1963 Aston Martin withdrew from racing to concentrate on its production cars. In October of the same year the new four-litre DB5 rolled off the production line and a shrewd business decision from Brown made it the most sought after car in the world when it had a starring role in the new James Bond film, Goldfinger.

Aston Martin's cars first made an appearance in the world of 007 when Bond drove a DB3 in the novel Goldfinger; the filmmakers upgraded it to a DB5 for the on-screen version and so began the long association between James Bond and Aston Martin. The DB5 also appeared in Thunderball and had brief appearances in Goldeneye, Tomorrow Never Dies and Casino Royale. In On Her Majesty's Secret Service, Bond switched to the DBS but it was only used in four scenes. In Goldeneye, to the disgust of loyal Bond fans, the producers switched to a BMW Z3 as Bond's preferred choice of 'company' car, the first time a non-British car had been used and a trend that lasted until Die Another Day when the filmmakers went back to using Aston Martin, with the V12 Vanquish. In Casino Royale (2006) two Aston Martins were used; Bond won the DB5 in a poker game and the new limited edition DBS became his company car, unusual for a Bond car because it has no gadgets.

Aston Martin built the DBS and the DBSV8 in 1967 and continued on its merry way until 1972 when the company entered a new era in which it changed hands several times. Company Developments were the first to take over; they were a Birmingham-based group of businessmen, with Sir David Brown retaining a seat on the board and becoming its President. Production of the DBS and the DBSV8 continued until 1972 when they were upgraded and became the Aston Martin Vantage and the AM V8, respectively. In 1975 the company changed hands again; this time the owners were Peter Sprague and George Minden. They were desperate to update the style of the cars and in 1976 they came up with the Aston Martin Lagonda, arguably the ugliest car ever made2. The following year they made the V8 Vantage and went back to the rounded curves that Aston Martin were famous for; a year after that the convertible Volante version was launched. Between 1981 and 1986, the company changed hands three times, finally being bought by Ford in 1987. Also in 1987, an Aston Martin was again seen in the hands of 007 in the film The Living Daylights, this time it was the V8 Vantage Volante. The first car to come off the Aston Martin/Ford production line was the Virage Volante, the convertible version of the pre-Ford V8 Virage. With Ford's money behind them, Aston Martin was able to invest in design and production and at the 1993 Geneva Motor Show they unveiled the new DB7, the first DB model to be produced for 20 years. In the summer of 1993 Ford took total control of Aston Martin and invested sixty five million pounds in design, development and production especially for the DB7. They bought a specialist paint and assembly plant in Bloxham, Oxfordshire from JaguarSport and in 1995 a new record was reached when seven hundred DB7s were built and delivered, the most in the company's history. In 1996 the ubiquitous Volante version of the DB7 was launched and the production on the Volante passed the one hundred mark. More records followed in 1996 when the DB7 reached the one thousand mark and two thousand in 1998. In 1999, the first twelve-cylinder Vantage (Virage) was produced with a six-litre, 480 brake horsepower, V12 engine which had been produced with the help of Ford RVT and Cosworth; again a Volante version followed suit.

In July 2000, Dr Ulrich Bez joined the company and in the October, the last V8 model rolled off the production line. The V12 Vanquish was unveiled in 2001: the first model to have the 'Paddle Shift' gearbox3. In 2004, the S version was launched and its paddle shift gearbox came in for a lot of criticism for being unable to operate smoothly and correctly, when it was featured on the BBC's Top Gear programme: presenter Jeremy Clarkson was quoted as saying:

In the end, a full lap was accomplished 'two weeks after it first set off'. This was done in a comparison test with the Ferrari 575 GTC. The 2007 model is rumoured to have a 'Stick-Shift' option and Aston Martin have promised to fit this gearbox to any Vanquish bought prior for a modest £13,250.

2003 saw the opening of the Gaydon factory, the first purpose-built Aston Martin factory and this year also saw the launch of the DB9 coupé5, the first car ever built at Gaydon, with the Volante version appearing in 2005. Also in 2005, Aston Martin returned to racing, with the purpose-built DBR9 competing in the International GT events, including a return to the Le Mans 24-hour race in which they came third. In the 2006 season, they fared less well but gained enough points to qualify for the 2007 Le Mans. 2007 saw the company change hands yet again, when Ford, who were rumoured to have financial problems, sold the main stake to a team headed by Prodrive's frontman Dave Richards bringing Aston Martin back into British hands.

In the next few years, a four-door car called the Rapide is due to make an appearance and a replacement for the Vanquish is due in 2012.

1Count Zborowski made a car known as the 'Chitty Chitty Bang Bang'; he was also a good friend of Ian Fleming who based Caractacus Potts and his car on the Count. This friendship could also account for James Bond's love of Aston Martins.2Fewer than 500 were ordered.3This means that the gears are changed via two paddles on the steering wheel, similar to a Formula 1 car.4The Stig is Top Gear's test driver; his true identity is unknown.5We have no idea what happened to the DB8 either.