Apple Bobbing Content from the guide to life, the universe and everything 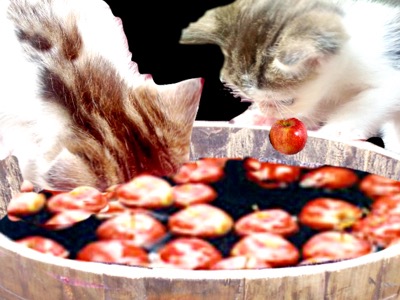 Apple bobbing1 is without a doubt the most important aspect of any Hallowe'en, Apple Day or Bonfire Night party, although it can be played from the late summer by those who have grown their own apples or at any time if you buy apples from a shop. Simple yet effective, this harmless pastime is an absolute gem of a party game, requiring a degree of physical aptitude.

Aim of the Game

Simply to obtain an apple from a container of water by bobbing for it. Use of hands, feet, or other appendages is not allowed - the methods of apple extraction are limited solely to those which involve your mouth. This does of course mean that participants are highly likely to get their faces and, depending on the size of the water container, upper torsos wet.

The core ingredients required for apple bobbing are:

Although apples with a reasonable-sized stalk are often preferred by the more fainthearted participants, they are not necessary. It is also possible to play with apples cut into slices.

Place lots of water and plenty of apples into the tub, so that the apples float freely around the top. People now take it in turns to try and obtain an apple from the tub, using their mouths only. In order to create a competitive edge to the game, timing each person and giving the fastest person to gain an apple or the person who gets the most apples in a predetermined time some form of prize, is worthy of consideration. Another variant is for the host to mark a specific apple somehow, traditionally by inserting a coin into it, and whoever gets that apple wins a prize.

Much favoured by the aforementioned fainthearted, this involves bending down so that one's face is just above the water, and chasing a floating apple around the tub with your teeth and tongue in order to grab hold of the stalk with your teeth, thus liberating the apple from the water by gently easing yourself into an upright position.

Skilled 'Stalkers' are sometimes able to give 'Bobbers' a run for their money.

This, as they say, is the proverbial it. The only option for apple bobbing for die-hards, the Bob usually consistently outperforms Stalking. This move is really what the game is all about, and involves getting seriously wet if the tub is as big as it should be.

Select an apple large enough for your widely-opened mouth to bite into, but not too big; you do not want to look like a dog trying to bite a beach ball. Then dive your head into the tub, opening your mouth widely (surprise surprise), and, surrounding as much of the apple as possible, drive it down to the bottom of the tub, and, using the extra support the bottom gives you, take a big bite into the apple and flip yourself upright. This motion should be smooth and speedy, in-and-out, and if performed correctly, will resemble the bobbing motion of water birds searching for food.

Depending on the cruelty of the hosts and the nature of the party, several options are available after an apple has been successfully procured. Handing the participants a towel and congratulating them is one, rather soft option. Alternatively there is a slightly messier, but undeniably humorous second option whereby a second bobbing tub is set up in the vicinity of the first. This tub should be a lot smaller - a large salad bowl would be ample, and contain a mixture of flour and small sweets (separately wrapped by preference). Anyone going immediately from the apple and water tub to the flour and sweets tub will of course end up completely plastered in sticky wet flour. Wonderful.

Following this, we suggest doughnut bobbing. Here ring doughnuts are tied up by string and left dangling from a washing line. Using only their mouths and with their hands behind their backs, the participants must attempt to eat all their doughnut(s) without any falling onto the floor.

Apple bobbing is believed to have originated as a celebration of Roman fruit goddess Pomona. It was supposed that the better you were at apple bobbing, the more likely you'd soon get married and be fruitful2.

In Agatha Christie's Hercule Poirot novel Hallowe'en Party (1969), someone is murdered and found drowned in an apple bobbing tub at a Hallowe'en party. Sacré bleu!

1Also known as ducking for apples.2Please note: apple bobbing is not a scientifically-recognised fertility treatment.