Agatha Christie - Author Content from the guide to life, the universe and everything 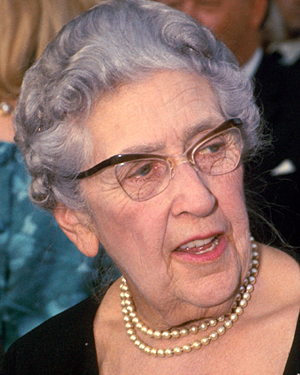 The most successful mystery writer of all time, and perhaps the most famous, English author Agatha Christie wrote 66 novels, almost 150 short stories, and 16 plays. Some of her more famous works are her novels Murder on the Orient Express, The Murder of Roger Ackroyd, and the longest-running play in history, The Mousetrap.

Agatha May Clarissa Miller was born in Devon, England, in 1890. She was the youngest of three children in a well-off family. A shy child, Agatha first turned to music and then to writing to express herself. She married a World War I fighter pilot named Archie Christie in 1914, and worked as a nurse during the war. She came up with the idea of her first novel, The Mysterious Affair at Styles, while working in a hospital. It was published in 1920.

The Works of Agatha Christie

The Mysterious Affair at Styles featured detective Hercule Poirot, a retired Belgian police officer. Poirot was very meticulous in the solving of his cases. Acting as his personal 'Watson' was Captain Hastings, a down-to-earth man who was always in the dark until the end of the novel when the solution was revealed. Captain Hastings later left the equation, but Christie went on to write over 30 novels featuring Poirot, the first of her two most famous characters.

Her other famous amateur detective was an elderly spinster woman named Miss Marple. She had spent all her life in the English village of St Mary Mead, but claimed that village happenings gave her a keen insight into the human mind. Christie wrote 12 novels featuring Jane Marple.

The Life of Agatha Christie

In 1926 Archie Christie asked for a divorce. Agatha disappeared from public view and was later found in a hotel, claiming that she had lost her memory. Agatha later married an archaeologist named Max Mallowan in 1930.

In 1971, the most popular mystery writer ever, with over one hundred million books published, became a Dame of the British Empire.

In 1976 Agatha Christie died. Her last Poirot novel, Curtain, was originally meant to be published posthumously, but this was decided against. It was published the year before she died. In it Captain Hastings and Hercule Poirot were re-united at the site of the first Agatha Christie novel, the Styles estate in The Mysterious Affair at Styles. It perhaps has the most astonishing twist of any Christie novel, and eventually ends with the death of the great Hercule Poirot.

Here are the novels of Agatha Christie in chronological order1. American titles are in parentheses. Titles of reprinted versions or titles with only small changes (such as changes in spelling) are not noted.

1Christie also wrote a series of romantic novels under the pen name Mary Westmacott and five books of autobiography and poetry.