Walt Disney Imagineering Content from the guide to life, the universe and everything 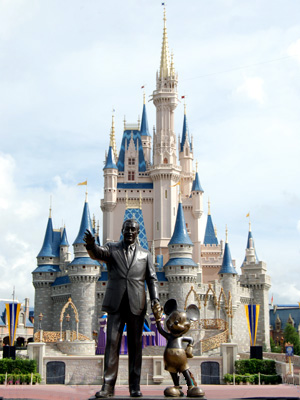 We are the dreamers - and the doers.
- Walt Disney

Imagineering is the name coined by Walt Disney to combine Imagination and Engineering. This principle, of bringing imagination to physical form, is one adopted by WDI (Walt Disney Imagineering) Enterprises.

On 16 December, 1952, Walter Elias Disney handpicked a small number of his most talented and imaginative animators and filmmakers. This exclusive group, initially known as WED Enterprises, named after Walt's initials, but later and more commonly called Imagineers, were chosen to create a place where his audience could enter and interact with a fantasy environment of Walt's creation, rather than simply see it on screen. Their task: to create a land, not merely an amusement park.

Initially these Imagineers had a shared film and animation background, and were encouraged to plan the areas and rides of Disneyland in the same way that they planned film sequences. This imaginative approach of taking people with skills in one discipline to work on solving a task in others is part of what gives the Imagineers their unique strength.

How does being an animator help in the design of a theme park? Animation is a discipline in which everything that the audience sees is created by the animation team. Every line that is visible, every character and background detail, everything is purposefully positioned and placed. The animation team creates it all, making all the individual elements work harmoniously together. Animators are naturally experienced in ensuring that a number of different elements work in conjunction to create the same image; these skills are perfect for creating visually attractive theme parks. Other filmmaking techniques used include forced perspective, in which buildings are not quite to scale, in order to make some parts of the park seem taller than they really are, such as the central castles, or different distances apart, depending on the intention.

Perhaps the greatest Imagineer was John Hench, who was one of the very first people Disney hired for WED Enterprises. He designed much of the look of the Disneyland theme parks, especially Adventureland, and oversaw Walt Disney World and EPCOT in Florida. He also designed the 1960 Squaw Valley Olympic Winter Games torch.

When creating Disneyland, Walt Disney was adamant that the same philosophy behind filmmaking applied to his parks. In a film, everything has a logical sequence that creates a narrative flow from beginning to end. In his theme park, everything needed to be arranged using the same narrative skills. An audience moves through a film in a way that makes sense, each scene building on the one before it to create an overall arc. Attractions created by Imagineers are designed to focus the audience's attention on one scene following another in order to create a similar narrative effect. This is done by arranging buildings, paths, trees and hedges to move the guests to each park along carefully chosen routes when outside in the open.

Also, unlike other fairs and parks, where all the different attractions compete for attention with the ones around it, attractions created by the Imagineers are designed to supplement and support their neighbours, blending together harmoniously. This level of detail goes down to the design of the paving, the appearance of street furniture such as bins and the costumes of those located in the area. All of this is purposefully created by the Imagineers, who try to uphold a list of key golden principles:

People from multiple different industries make up WDI Enterprises. Over 140 different disciplines and job titles are required. Many skills are utilised in the Imagineering process and all these people are referred to as Imagineers. They help to maintain the purity of the underlying idea, while constantly attempting to improve upon it, a process they call 'plussing'. This carries through the creation of an attraction, from 'blue sky' conceptualisation to the final installation. Yet it doesn't stop there; the attraction must be maintained and even upgraded and rejuvenated in order to stand the test of time. When Walt Disney opened Disneyland, he said that the park would never be finished, but would continue to develop and grow. This philosophy also affects the attractions within it.

One of the cornerstones of Imagineering has been the development of Audio-Animatronic figures. These are so named as the earliest successful figures used a tape-based system developed for the Polaris nuclear submarine. The tape contained both sound and electric pulses that controlled the figure's movement, enabling both mouth and voice to be perfectly synchronised. Early experiments in this field began in 1951, when Walt hired dancer Buddy Ebsen to tap-dance in front of a grid. Walt filmed his actions, hoping to create a mechanical figure capable of recreating the dance. His team came to the conclusion that they could not convincingly replicate the complex actions on anything less than a full-sized figure. By 1960, when Walt was contacted by the co-ordinator of the 1964 New York World's Fair, he planned an attraction starring a life-sized robot Abraham Lincoln.

While the Abraham Lincoln robot was in development, Disney was filming Mary Poppins. The first audio-animatronic figure seen was the small singing bird held by Julie Andrews in that film. In honour of this, the centre where Imagineering's prototype manufacturing takes place is named MAPO, short not only for MAry POppins, but also Manufacturing And Production Organization.

Even back in the early 1960s, the Imagineering team was able to excel under pressure; a last-minute exhibit for the World's Fair was made for Pepsi and the United Nations International Children's Fund. Entitled 'It's A Small World', it soon became one of the world's most famous rides.

Since 1952, to date the Imagineers have created over 400 rides and attractions in 11 different Disney theme parks worldwide.

There are also two waterparks, Blizzard Beach and Typhoon Lagoon, both in Florida. Not limited to shows and attractions, the Imagineers have also been involved in the creation of themed hotels, Disney stores, sport centres, other park entertainment, cruise ships and even the town of Celebration.

And it's not even all about Disney. The Imagineers have been involved in the creation of various outside developments such as the Las Vegas Monorail, the WEDway PeopleMover at Houston International Airport and the architectural lighting and a lounge at LAX, Los Angeles International Airport. Other projects have included museum displays, restaurants, even part of the 1960 Squaw Valley Winter Olympics and the 1964 New York World's Fair celebrations.

The Imagineers have also inspired others. They inspired their Walt Disney World neighbour and rival, Universal's Islands of Adventure theme park, to raise the bar and create their Wizarding World of Harry Potter.

Rides for Disney parks have even formed the basis of successful films, such as The Haunted Mansion and The Pirates of the Caribbean. When Michael Crichton visited the Pirates of the Caribbean ride at Disneyland, he wondered what would happen if the pirates began killing the passengers on the boat, and was inspired to write and direct Westworld, a 1973 film about theme park figures killing the visitors. The Stepford Wives, a book by Ira Levin published in 1972 and first filmed in 1975 by Brian Forbes, was about a former Disney employee who uses his Imagineering talents to create perfect wife robots in a small town.

Today the Imagineers are the Walt Disney Company's research and development department. They have a wide range of backgrounds and experiences, not only including artists and animators, but also architects and even astronauts. This unique pool of talent aims to create things unrivalled anywhere else.

Their aim is perfectly symbolised in their logo. This is Mickey Mouse wearing the blue wizard hat seen in the 'The Sorcerer's Apprentice' segment of the 1940 Disney film Fantasia. Like Mickey, Imagineers dream of creating and controlling the world around them and performing magic, turning their imagination into reality.

1Rather an odd rule for an organisation that has a central fairytale castle, areas such as Mainstreet USA, Adventureland and Frontierland and specific rides duplicated in their theme parks worldwide; however, despite the obvious similarities, each contains some differences.