The Disney Princes Content from the guide to life, the universe and everything 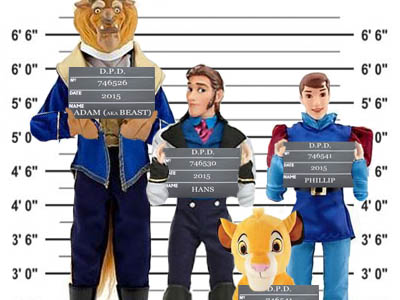 Since 1937, Disney's animated films have featured plucky princess heroines who find themselves in difficult situations, but by the end of the film have married a prince to live happily ever after. Some debate has arisen over whether or not the Disney Princesses are unsuitable role models for young girls, yet very little attention has been paid to the Disney Princes themselves.

So what qualities do the Disney1 Princes exhibit? What do they have in common? And first of all, what qualifies a Disney hero to be considered as a prince?

A Prince among Men?

Marrying a prince makes a woman a princess, but marrying a princess does not make a man a prince (although marrying a woman of a higher rank, such as Queen or Empress can). So Disney's princess-marrying heroes, such as Flynn Ryder who marries Rapunzel in Tangled, do not count. Aladdin, who marries Princess Jasmine, is a street rat by nature, and though he impersonates a prince, calling himself Prince Ali, he is not in fact a prince.

Similarly there are a couple of characters who bypass the prince phase completely and go straight from being common to king. In The Sword in the Stone, Wart, who initially is merely his older brother's squire, becomes King Arthur when he pulls a sword from the stone. Milo Thatch becomes king at the end of Atlantis: The Lost Empire after being chosen by both a sentient crystal and the previous king on his deathbed to be his successor, although being in a relationship with Princess (later Queen) Kidagakash Nedakh helped.

Lions are considered to be the king of the jungle, but in Disney films, it is the princes who are often the most lion-like. Princes are lions in Robin Hood and The Lion King. Although the inspiration for the appearance of the Beast in Beauty and the Beast came from wolves, a mandrill and a gorilla seen in London Zoo, with a hint of buffalo and wild boar, there is a strong suggestion of lion there too.

The most important task for a prince to do is continue the family name and line. This means that they must marry and breed, a task that they seem to find surprisingly difficult. The Prince in Snow White tries serenading the titular princess, but instead scares her away. Prince Charming in Cinderella not only fails to get his love interest's name and address, but also he is incapable of keeping up with a woman wearing new high-heeled glass slippers and a big dress descending a staircase. Prince Eric was unable to kiss a woman so desperate to be kissed that her life depended on it, despite the aid of mood music and a romantic atmosphere.

This factor, that Princes just cannot get the girl without considerable help, is something recognised by their relatives, advisors and closest friends, who are often desperate to help them out2. In Cinderella, Prince Charming's father, despairing of his son's ability to get married on his own, arranged a whole ball to help him meet women. In The Little Mermaid Prince Eric's father-figure Grimsby attempted to set him up with the Princess of Flowerhaven and admitted feeling that Prince Eric wasn't looking hard enough for the right girl. Perhaps it is because of this that many Princes are betrothed at an early age, such as Prince Phillip in Sleeping Beauty or Simba in The Lion King.

Of course, even after a suitable partner is found who meets the Prince's approval, there is no guarantee that the Prince will be capable of continuing the royal line. Perhaps the reason why Disney's Princes are so often seen kissing women others consider to be corpses, such as Snow White, Sleeping Beauty, Meg and Giselle, is because they know that breeding somehow involves their partner lying down?

In Disney films, Princes who do not find a partner by the end of the film are invariably evil. This is because they are neglecting the natural order and their solemn duty. In fact, the unwritten law of Disney Princes seems to be that in a Royal Family, the oldest son is always good, pure, handsome etc while their younger brothers are maliciously untrustworthy and spend all their time scheming to take the throne.

Although most Disney Princes are heroic, fictional characters, two are based on notorious historical figures. Certainly the most unexpected Disney Prince of all is Adolf Hitler, despite not being a prince in real life. Still alive at the time Education for Death, the short wartime propaganda film, was made, extracts from his speeches were used so that his character is actually voiced by him.

Some Disney Princes are brave and bold, while others, especially the baddies, prefer to run away. Not all Princes are heroic, though; the Princes in Snow White, Bambi and Cinderella don't really do a lot. If you're holding out for a hero fear not, for fortunately Princes Philip, Eric, Mickey Mouse, Beast, Simba and Hercules are prepared to come to the rescue and fight against lions and dragons, gods and witches despite the rising odds. 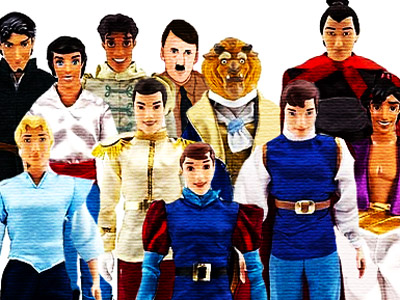 1This article looks purely at Disney's animated princes, so Pixar princes, such as Prince Mor'du in Brave (2012), as well as princes that appear in Disney's live-action films, do not count. Similarly, television series and direct-to-video sequels are excluded.2Often, but not always; in Enchanted, Prince Edward's wicked stepmother Narissa's aim is to prevent Edward from meeting girls to secure her own grip on the throne.3The preparation of food by chopping it up into little pieces.