Sir Peter Ustinov - A True Virtuoso Content from the guide to life, the universe and everything 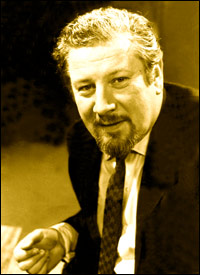 He was a very good actor, but he wasn't used as an actor as much as he should have been because he became famous as Peter Ustinov.
- Film director Michael Winner

Born Peter Alexander von Ustinow, Sir Peter Ustinov described himself as 'an Englishman without a drop of English blood'. His father, Iona Ustinov, was a German journalist and his artist mother, Nadia Benois, was Russo-French. He also claimed Ethiopian, Italian, Spanish and Swiss ancestry. He joked that 'I rather think of myself as ethnically filthy - and proud of it'. Peter was conceived in St Petersburg and born in London on 16 April, 1921. His father represented a German news agency.

One thing the passing years and its tragedies have taught the rest of us is that prejudice is the villain of the piece.
- Sir Peter Ustinov

I was irrevocably betrothed to laughter, the sound of which has always seemed to me the most civilised music in the world.

Peter showed his gift for mimicry from an early age. At age three when his mother invited Ethiopian Emperor Haile Selassie to dinner he amused the guests by giving impressions of leading politicians. By the age of four his car impersonations were so accurate that people were known to leap on to the pavement to avoid being run down by non-existent vehicles.

Basically I'm a very serious person, but I think the form it takes with me is comedy. I see the amusing side of all potentially pompous situations.

Educated at Westminster school, the stage-struck Ustinov did not excel academically - one report stated 'He shows great originality - which must be curbed at all costs'. Unsurprisingly, he left school at 16 without qualifications1 to enrol at the London Theatre School.

If the world should blow itself up, the last audible voice would be that of an expert saying it can't be done.

On the outbreak of the Second World War his application to join military intelligence was rejected despite his demonstrated fluency in half a dozen languages, apparently because he had 'the sort of face that did not get lost in a crowd'. Undeterred, Ustinov joined up as a private2 and for a time became batman to actor David Niven, staying in the luxury of the Ritz Hotel before going on location to North Africa. Spending most of the war with the Army Cinema Unit, Ustinov's first real film role came as a priest in One of Our Aircraft Is Missing (1942), one of the best war films made during World War II.

I can honestly say I never wasted as much of my own time or that of other people as I did in the Army, and it was symptomatic of things to come that life in uniform was safer than life as a civilian.

Contrary to general belief, I do not believe that friends are necessarily the people you like best, they are merely the people who got there first.

After the war Peter's film career, both in Britain and in Hollywood, was tremendous. He earned an Oscar nomination for his supporting role as Nero in Quo Vadis? (1951) and won Academy Awards for outstanding supporting roles in Spartacus (1960) and Topkapi (1964). Ustinov startled even his admirers with Romanoff and Juliet (1961), which he wrote, produced, directed and acted in; he then repeated this feat with Billy Budd (1962). Perhaps his most famous starring role was that of Agatha Christie's Belgian detective Hercule Poirot in Death on the Nile (1978) and several other film adaptations. The list of his films as actor, writer, director, producer etc, is too long to repeat here, but perhaps it is worth mentioning his cameo role as a truck driver in The Great Muppet Caper (1981) to show that he never took himself too seriously.

Critics search for ages for the wrong word, which, to give them credit, they eventually find.

A talented playwright, his first play, House of Regrets was being staged in the West End at the time he entered the Army. His stage successes included The Love of Four Colonels, Halfway up the Tree and Beethoven's Tenth as well as Billy Budd and Romanoff and Juliet (see above). His own plays were not enough to keep him occupied however, and he took on such roles as King Lear at Stratford-upon-Avon and won Emmy awards for his portrayals of Socrates and Dr Johnson.

It is our responsibilities, not ourselves, that we should take seriously.

To fill up the spare time this left, Ustinov wrote several novels3 and a best selling autobiography, Dear Me. He also performed a hugely successful one-man show which toured world-wide and showed off his marvellous talent for observation and impersonation4. He was an immensely popular guest on TV chat shows wherever he went, a 'sit-down comic' as he described himself. Opera direction became another string to his bow with Paris, Berlin, La Scala (Milan) and even the Bolshoi in Moscow playing host to his productions. He even found time to marry three times.

...the great thing about history is that it is adaptable.

Among the many international medals and awards showered upon him, he was awarded the CBE5 in 1975 and subsequently knighted in 1990. About his visit to Buckingham Palace for the investiture, he famously said The invitation said 'Delete whichever is inapplicable: I can kneel — I cannot kneel.' But there was nothing for those of us who can kneel but not get up.

Beliefs are what divide people. Doubt unites them.

It is impossible to characterise Sir Peter Ustinov simply; actor, playwright, novelist, philosopher, wit, raconteur, linguist, the list of his accomplishments seems endless. The achievement of which he seemed most proud, however, was his role as an ambassador for the United Nations Children's Fund. From an official statement: 'Appointed a UNICEF Goodwill Ambassador in 1968, he fulfilled the voluntary position with his customary zeal. His travels on behalf of UNICEF took him to China, Russia, Myanmar, Cambodia, Kenya, Egypt and Thailand, among other countries and hosted scores of international television specials and benefit concerts for UNICEF'.

Love is an act of endless forgiveness, a tender look which becomes a habit.

Sir Peter Ustinov died at his home in Switzerland on Sunday, 29 March, 2004. He was survived by his wife and four children and will be sadly missed.

The point of living, and of being an optimist, is to be foolish enough to believe the best is yet to come.

1Although he did eventually gather honorary degrees from universities in Britain, USA and Canada and was chancellor of the University of Durham from 1992.210th Bn Royal Sussex Regiment.3He wrote longhand, as he said: 'If I could type, I'd rather play the harpsichord'.4'It's kind of an athletic thing ... I regard it as a more intellectual, and certainly more lucrative, way of jogging'.5Companion of the Order of the British Empire.