Amazing Comets and their Impact Content from the guide to life, the universe and everything 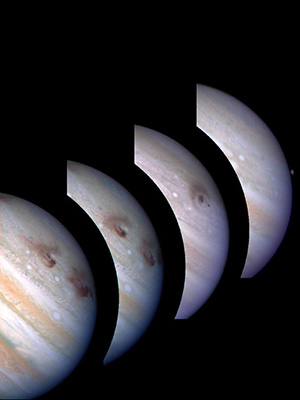 Comets are lumps of rock left over from the formation of the Solar System. Fleetingly they appear in our skies, and just occasionally they can be celestial divas. Here are some of the most spectacular comets, recorded from the time when superstitious people considered them harbingers of doom, up to the present day.

The week-long visitation of a brilliant comet following the assassination of Roman dictator Julius Caesar in March 44 BC confirmed his divine status to the people of Rome. The Emperor Augustus even had coins minted in Caesar's honour which displayed the comet on the reverse side. Chinese astronomers, who thought comets were 'celestial ambassadors', recorded this fleeting visitor a full month before the Romans saw it, but no doubt they called it something other than Caesar's Comet. As it was seen from their nation's capital, 'Comet Chang'an' could have had a nice ring to it.

The Great Comet of 1556 was named after Charles V, the Holy Roman Emperor. This VIP was also king of Germany, Italy and Spain, and Lord of the Netherlands as well. When he saw the comet Charles V thought it a sign for him from Heaven so he sent for a philosopher called Eginard to discuss what it could mean. The upshot was that Charles V retired to a monastery. Fast forward to the 19th Century and English astronomer John Russell Hind1, after studying the report of Friar Giles of Cambridge on the Great Comet of 1264, declared that it and Comet Charles V were the same comet on a return visit. If this was accurate then a further return could be expected around 1848. Unfortunately it didn't materialise, so we can only speculate on a possible return of the comet in 2140 to prove Hind correct.

The Great Comet of 1744 was named after the Swiss astronomer Jean-Philippe Loys de Chéseaux (1718 – 1751) even though he was not the first person to learn of its existence2. Comet de Chéseaux was visible to both hemispheres of Earth and it must have been a spectacular sight indeed, with its six tails spread across the sky like a cosmic fan.

Italian astronomer Giovanni Battista Donati (1826 - 1873) discovered Comet Donati in 1858. It has the distinction of being the first comet ever to be photographed, at Harvard College Observatory in Cambridge, Massachusetts, USA.

The Great Comet of 1811 was discovered by French astronomer and archaeologist Honoré Flaugergues (1755 - 1835). It was, by all accounts, a visual treat for non-astronomers as well as an unforgettable experience for comet enthusiasts. Of all the comets known at that time, it was the one that was visible for longest, a record it held until Comet Hale-Bopp overtook it at the end of the 20th Century. Comet Flaugergues is sometimes referred to as Napoleon's Comet, as the French Emperor was making plans to invade Russia at the time, but that didn't turn out so well for him.

Comet Hale-Bopp was discovered in July 1995 by two independent observers, professional astronomer Alan Hale, and amateur astronomer Thomas Bopp using a borrowed telescope. As was the normal practice of the time, Bopp sent a telegram to the Central Bureau for Astronomical Telegrams, announcing his discovery. Hale, on the other hand, had access to a new contraption known only to a few people: the Internet. He had already e-mailed in his discovery and two updates on the new position of the comet before Bopp's telegram arrived. The Internet was responsible for spreading the news instantaneously worldwide and Hale-Bopp featured on the new Astronomy Picture of the Day website many times. The twin-tailed apparition was visible to the naked eye for just about 17 months, from May 1996 until September 1997, which makes it the current endurance champion and probably the most widely-observed comet in history.

Halley's Comet is the most well-known comet of all; it holds the distinction of being the first recognised periodic comet, returning approximately every 76 years. English astronomer Edmond Halley (1656 - 1742) worked out its orbit in 1682. He correctly predicted the comet's next return to the inner Solar System, so it was posthumously named in his honour. Halley was a contemporary of Sir Isaac Newton; in fact he prompted Newton to rewrite his lost notes on gravity and publish them.

Comet Holmes has been visiting the inner Solar System approximately every seven years since 1892. Up to 2007 it was nothing to get excited about. That soon changed when Comet Holmes underwent an eruption, brightening it to 3rd magnitude over a period of 42 hours. The comet's coma expanded to 1.4 million km (869,900 miles) in diameter, making it, for a while, bigger than the Sun. Comet Holmes returns to the inner Solar System in March 2014. Will it put on another stunning performance, or will it be a damp squib? Only time will tell.

The Great Comet of 1680 was the first one discovered by telescope, by German astronomer Gottfried Kirch. Sir Isaac Newton studied this comet's behaviour and realised that when it disappeared and later reappeared in a different part of the sky, it had in fact gone around the Sun and was now heading away from it. Newton included a diagram of its orbit in his Principia4 of 1687.

A new visitor to the inner Solar System was discovered in 2007 and catalogued C/2007 N3. Identified by 19-year-old meteorology student Quanzhi Ye of Sun Yat-sen University, the comet has been given the proper name Comet Lulin  after the Lulin Observatory of the NCU, which is where the first images were obtained. Its coma (atmosphere) is 500,000km (311,000 miles) wide, that's triple the diameter of Jupiter, and it is travelling at a speed estimated to be around 140,000 mph. The closest approach of 0.4AU (38 million miles), nowhere near the Earth, was plotted to occur during the last week of February, 2009. The Astronomy Picture of the Day website posted two images of Comet Lulin within a week, on 02 February and 07 February, which alerted those keen skywatchers who didn't already know of the existence of the comet. We now knew that it had a tail and an anti-tail which led to more spectacular shots of this turquoise-coloured fleeting visitor. From our perspective Comet Lulin was right next to Saturn in the constellation Leo on Monday night, 23 February. For lucky viewers with dark skies, Comet Lulin looked like a fuzzy ball, visible to the naked eye. Binoculars or a telescope aided the chances of locating the comet, and maybe a tail or two. Unfortunately people living in cities and well-lit areas needed to find a dark sky viewing area.

The Great Comet of 2007 was the 31st comet discovered by modern-day asteroid and comet hunter Robert McNaught. We are so lucky to live in an age when we can not only appreciate such wonders as Comet McNaught with our own eyes but there is the technology to photograph them and the means to distribute the images worldwide so others who weren't so lucky can appreciate them too. At its most photogenic, the luminous bands of its tail spanned some 35° of the southern skies. We can only imagine whether the 18th-Century 'comet ferret' Charles Messier would have been satisfied with digital imagery if it had been available to him.

Comet Shoemaker-Levy 9 ensured its place in history with its extraordinary death. It was discovered in March 1993 in orbit around Jupiter by astrogeologist Dr Eugene 'Gene' Shoemaker, his wife Carolyn and their friend David Levy. Astronomers knew that the comet was being pulled apart by Jupiter's gravity and that the fragments would eventually impact the gas giant. Never before in history had such an event been witnessed, so Jupiter was monitored 24/7 until, between 16-22 July, 1994, chunks of the comet punched Jupiter's atmosphere like a crashing wagon train, leaving visible 'bruises' the size of the Earth. That was the end of comet Shoemaker-Levy 9, but what a way to go!

The comet 55P/Tempel-Tuttle was named after Wilhelm Tempel (1821 – 1889) and Horace Parnell Tuttle (1837 – 1923) who co-discovered it upon its return to the inner Solar System in 1866. Modern astronomers have been able to backtrack the 33-year periodic comet to its first recorded appearance in 902 AD. While this particular comet doesn't have the charisma of the diva celestial visitors, it is the one which is responsible for our annual Leonid meteor shower. This is a hotly-anticipated meteor shower during years when the comet revisits, as it deposits more debris in its wake. This then falls as 'shooting stars' when the Earth travels through the comet's orbital path. One descriptive writer, Agnes Mary Clerke, shared her experience about what happened on the night of 12-13 November, 1833:

A tempest of falling stars broke over the Earth... The sky was scored in every direction with shining tracks and illuminated with majestic fireballs. At Boston, the frequency of meteors was estimated to be about half that of flakes of snow in an average snowstorm. Their numbers were quite beyond counting; but as it waned, a reckoning was attempted, from which it was computed, on the basis of that much-diminished rate, that 240,000 must have been visible during the nine hours they continued to fall.

Comet Tempel-Tuttle will pass our way again in 2031. We can only cross our fingers and hope that the Leonid meteor shower that year will be half as spectacular!

Comet West travelled within 0.2 AU5 of the Sun and subsequently the nucleus broke into four chunks. It was visible in broad daylight post-perihelion in early March 1976, and from dark skies it looked like a multi-coloured cosmic feather. Comet West's orbital path is a mind-boggling length; so far that astronomers measure it as one light year. As comets don't travel at the speed of light, Comet West won't be back this way any time soon, probably not for a million years. We wonder what changes will have occurred on Earth in that time and whether human beings will even be around to witness its second appearance, what with things like Comet Swift-Tuttle6 being placed on the list of potentially threatening NEOs (near-Earth objects) at NASA's Jet Propulsion Laboratory. 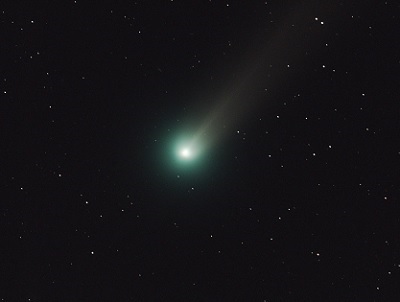 Image credit: NASA
1Discoverer of carbon star R Leporis, also known as Hind's Crimson Star.2It was seen a few days before de Chéseaux by Dirk Klinkenberg – its alternative designation is Comet Klinkenberg-Chéseaux. 3Fans of Douglas Adams speculate that this was probably the droppings of a space whale.4Full title Philosophiæ Naturalis Principia Mathematica.5AU stands for Astronomical Unit, the average distance between the middle of the Sun and the centre of the Earth, which is roughly 93 million miles or 150 million km.6The parent comet of the annual Perseid meteor shower.