Isaac Newton: Overview Content from the guide to life, the universe and everything 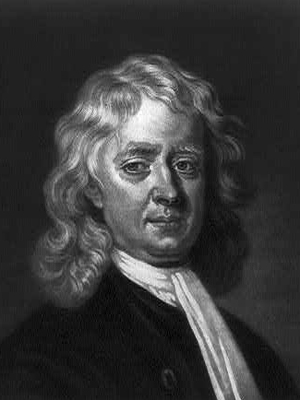 Nature and Nature's laws lay hid in night: God said, 'Let Newton be!' and all was light.
– Alexander Pope

Isaac Newton was a 17th-Century English scientist and mathematician. He is widely proclaimed as the greatest scientist and one of the greatest mathematicians of all time. His main mathematical achievement was the invention of calculus, the analytical tool which torments schoolchildren but is the core of modern mathematics. He shares the honour of inventing it with the German Gottfried Leibniz. Newton's scientific achievements are in the field of Physics, where he more-or-less wrote the subject from the ground up. His Three Laws of Motion and his Law of Universal Gravitation are only part of a theory which explains everything from the motion of the planets around the sun and the trajectories of moon probes to the paths of bullets and the behaviour of snooker balls. In addition, his study of optics, while not as far-reaching as the theory of motion, set the stage for later discoveries.

Newton is, of course, best remembered for his scientific works. When asked to name one of his achievements, most people would probably pick his Theory of Gravity. Yet it could easily be argued that this was far from Newton's greatest contribution to the field of Natural Philosophy1.

Instead, it was the techniques that Newton brought to his studies that opened the doors to his discoveries. Newton was the first person to use mathematical analysis of precise observations to test out his theories. Although others, notably Galileo, had used observations before, Newton made this the mainstream practice. Indeed, almost the whole model of modern science, even down to the impersonal style of scientific papers, derives from his work.

After taking over at the Mint, Isaac Newton carried out what amounts to the world's first time and motion study. This enabled him to identify the slowest points in production - the 'rate limiting steps' - and carefully introduce machinery that improved production from £15,000 to £100,000 of silver per week in less than three years.

It was to be nearly a century before Adam Smith came up with similar ideas.

Newton was notoriously secretive, both by nature and by necessity of being an Arian alchemist. Yet even leaving that aside, some events in his life remain unexplained. In 1693, he wrote a pair of letters to close friends, full of vague accusations and with a distinctly unbalanced sound to them. Although he recovered quickly, rumours circulated in Europe for another two years that the English genius was now a helpless madman. What caused his breakdown, and what happened during that time?

Then there is the mystery of the destroyed secrets. Newton burned a box of papers in 1727, just months before his death. Given the number of papers he left untouched that he would have regarded as highly incriminating during his lifetime, we can now only speculate on what was so controversial that he could not stand it to exist for posterity. One of the more innocuous suggestions is that it was copies of the Mint accounts. Others have suggested that he had been involved in black magic, perhaps a (super)natural extension of his alchemical research.

Child of the Revolution

Newton was born during a particularly tumultuous period of English history. That history would touch him, and he in turn would touch it. Aside from the Civil War, he claimed to have personally heard the guns of the Dutch invasion in 1667 and was tangentially involved in both the Glorious Revolution and the Union of England and Scotland. As a staunch Whig, his political fortunes rose and fell with his party's electoral successes (and the inclinations of the various monarchs).

The Man Who Killed Aristotle

Newton's influence on philosophy is, of course, enormous. Copernicus and Kepler already knew about gravity before Newton wrote about it, but they had nothing like Newton's complete theory.

In many ways, it was not the specifics of gravity, calculus or optics that were Newton's gift to posterity. Instead, an entire world view was dissected under his lens, and found wanting. By the time Newton died, a new world-view - Newtonism - in which everything had a rational explanation was replacing the ancient systems of Plato and Aristotle. Experiment, not reason, would be the arbiter of truth, and there was no longer a place for God in explanations of how the world worked. Newton was, however, a firm believer in God, although his beliefs about Jesus Christ were somewhat unorthodox.

When Laplace remarked to Napoleon - on the subject of God - 'I have no need for that hypothesis', it was a Newtonian world-view he was espousing2.

It may be of assistance to the reader to have the major events of Newton's life set out in a single timeline:

1The word 'science' would not be coined for another century.2Napoleon's reply is less well known, though equally witty: 'Though it is a fine hypothesis; it explains many things.'