Isaac Newton: The Early Years - 1642 - 1661 Content from the guide to life, the universe and everything 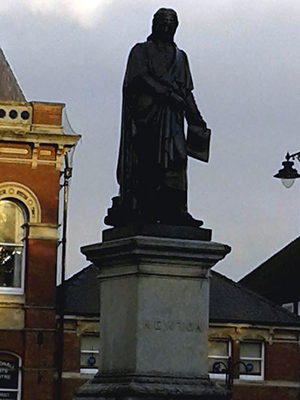 ...when he was born he was so little they could put him into a quart pot & so weakly that he was forced to have a bolster all around his neck to keep it on his shoulders.

For several generations, the Newton farming family had been painfully slowly climbing the social ladder. They had moved from serfdom - workers 'tied' to the land and bought and sold with it by the local lord - to yeomen, one step down from the middle classes that could afford to educate their children to become priests or similar.

In 1642, Isaac Newton married his sweetheart, Hannah Ayscough. Hannah would have been regarded as a suitable match by both families - not as wealthy as Newton, she came from faded gentry and made up for her lack of ready cash with the cachet of a 'well bred' name. It seems that this wedding was arranged in some haste, for Isaac was seriously ill. He died just a few months later, leaving his wife a widow (probably in her mid-to-late twenties) but with a comfortable inheritance of around 100 acres and £500. And that is all that history knows of Isaac Newton.

All, that is, but for one thing. For Hannah Newton was pregnant. When she gave birth, seven months after her wedding, she would name her son after his late father - Isaac Newton Junior.

Records of Newton's birth and early years are scarce. Often, we have to rely on the incomplete, contradictory or second-hand anecdotes to piece together what happened. A prime example is Newton's date of birth. Coming just seven months after his parents' wedding, we - and Newton's contemporaries - might draw some rather embarrassing conclusions. Newton himself claimed to have been highly premature - so small he would fit in a quart pot, and not expected to live beyond a few hours. But then again, Newton would later claim that his parents married in 1639, three years before his birth and two and a half years before their wedding certificate is dated, so perhaps his testimony here is suspect. What is more certain is that he was born early on Christmas Day1.

There was little in Newton's early life to indicate the genius to come. In many things, he was an abject failure, notably the farming career his mother had mapped out for him. In others, it was only the intervention of influential patrons that secured his progress - he persistently failed or scraped through exams. And his early interests in woodwork and, apparently, poetry, seemed far removed from what, with hindsight, seems his obvious destiny2.

The first certain record of Newton's life after his birth has been made much of by the more psychologically-minded of his biographers. In 1646 - when Newton was three - Hannah Newton married the Reverend Barnabas Smith.

All the signs are that this was a very businesslike arrangement. Although Hannah was not short of money - she had managed her generous inheritance well - there was a clear pre-nup drawn up between her and Smith. Generous provision was made by Smith - three decades her elder - for Hannah's child in Smith's will. Yet another clear condition of the marriage was that the new Mrs Hannah Ayscough-Newton-Smith was to leave her son in the care of her parents, James and Margery Ayscough, while she moved in with Smith, several hours' walk away.

So it was that Newton was raised between the formative ages of three and 11 - seeing his mother rarely, and in a farm sufficiently remote that friends of his own age must also have been scarce company. By contrast, Hannah seems to have settled in comfortably with Barnabas Smith - comfortable enough to bear him three half-siblings for young Isaac (Mary3, born 1647, Benjamin, born 1651, and Hannah, born 1652). Small wonder that some have looked on this as an explanation of his irascible and introverted, almost hermitic, character in later life.

Little is known of Newton's life during these years, but there are a few signs of a young tearaway in the offing. He would later recall threatening to kill his mother and adoptive father and burn their house down over their heads.

Newton was born into a time of civil war. Earlier in the year he was born, the battle of Edge Hill had been fought, the first major engagement of the War. Later in his life, Newton would become caught up in the ongoing reverberations from this momentous event in the nation's history.

This chapter of Newton's life came to an end with the death of Smith. Hannah moved back to Woolsthorpe a wealthy woman, bringing with her what must have been an intolerably noisy gaggle of unwanted half-siblings for young Isaac. Fortunately, he would not have to endure them for long.

The next great chapter in Newton's life was his academic awakening. He was sent away to the King's School4 in Grantham5, where he was to study the standard syllabus of Latin, Greek and the Bible. He was to lodge with the local apothecary, known to posterity only as Mr Clark6, and his family.

Newton's path as a typical adolescent under-achiever with a tendency towards yobbishness continued. He was marked 78th out of the 80 pupils in his year at the school. He lost himself in poetry, copying out the works of John Donne by hand. He filled his notebooks with sketches. And he developed an interest in building wooden clocks and mills - and in girls.

The particular girl who caught his eye was the stepdaughter of the Mr Clark with whom he was lodging, Catherine Storer. Although there are no explicit words left in Newton's writings - or in Storer's, for that matter - it seems clear that the young Newton was infatuated with Storer. It also seems clear that she did not return the feelings. There is no evidence of hostility or animosity between the two, but nor is there any evidence of real intimacy.

Despite his failure by academic standards, Newton seems to have caught the eye of a few influential supporters, including the headmaster, Henry Stokes. Newton was supplied with books he might read in his own time - on model making7 and Puritanism8.

The pivotal moment in Newton's school career hinged, ironically, not on his latent academic abilities but on his latent delinquency. For reasons now lost, he got into a fight with another boy - possibly another of Clark's children. Having initially bested him physically (at least according to the version that Newton would later tell), Newton then swore that he would better him academically as well to complete his humiliation.

Newton's destiny hung in the balance. His grades rocketed. If Stokes had any doubt before, he was now clear in his intent that Newton should go up to University. But at the same time, his mother Hannah had very different ideas. This high-falutin' education was all very well, but what need had a farmer for theology? In 1659, she laid down the law: Newton was not to squander the family fortune that she and Isaac Senior had built up. He was to return home from Grantham and start to take charge of running the farm.

Newton had no choice but to obey, and so he became a gentleman-farmer, Lord of the Manor of Woolsthorpe in deed as well as name.

It was not a vocation that he took to.

Stories abound of Newton's failings as a farmer. He was simply inattentive - distracted by higher matters, it is easy to believe from a 21st-Century viewpoint. He allowed sheep to wander astray. Hannah assigned a servant to keep an eye on him - he delegated his tasks to the servant and sat under a tree, or sneaked into Grantham to read books at Clark's. The delinquent Newton was in the ascendant.

Perhaps this behaviour began to eat away at Hannah. Perhaps Newton was also pleading with her. We cannot tell. What we do know is that when Stokes came to her with an offer - he had managed to use his contacts to have Newton admitted to Cambridge as a 'local boy', thus waiving the usual 40 shillings fee - she finally relented and allowed her first husband's only son to head off to a higher education.

Finally, Newton was to break the bonds of birth and make the journey to his true home - Cambridge University.

1By the Julian calendar - England had yet to adopt the Gregorian system used in the Roman Catholic parts of Europe.2As an old man, he would describe poetry as 'a kind of ingenious nonsense', in a perfect depiction of innocence lost.3Or Marie.4The Free Grammar School of Edward VI.5Later home to another famously irascible leader, Margaret Hilda Thatcher.6Or Clarke.7The Mysteries of Nature and Art, by John Bate.8Probably supplied to Newton by John Angell, bolstering the small library Smith had left Newton.