Isaac Newton: Administrator of the Royal Society Content from the guide to life, the universe and everything 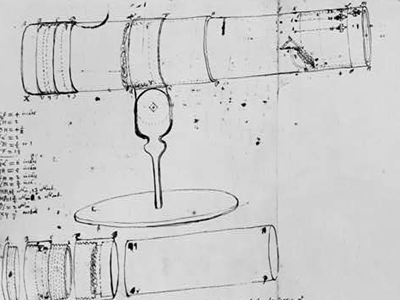 One of Isaac Newton's great contributions to science is frequently overlooked. Aside from his contributions to the method and theory of science, he was also hugely influential in ensuring that science in general, and Britain in particular, had an administrative setup that encouraged new scientists and a public interest in the new art.

Newton's first formal contact with the Royal Society came in 1671. The society had been set up just a couple of decades earlier1 by a group of 'natural philosophers', including the man who would go on to be Newton's predecessor as Lucasian Professor, Isaac Barrow. Yet of all the mathematical and scientific insights that Newton could have brought to this gentlemen's club, it was his practical abilities that effected his first introduction.

In 1668 and 1669, he had set himself to build a telescope. In retrospect, we can see that this project was inextricably tied to his other interests. He needed accurate measurements of the planets, and who better to make them than himself? Yet at the same time, he knew from his work on optics that a lens must inevitably split the various colours of light and therefore blur the image it produced. So he decided to base his telescope not around lenses, but around curved mirrors - he would make the world's first reflecting telescope.

When finished, it was a marvel of science. He had built it from scratch, using tools he had made himself, even casting the tin/copper alloy he used for the mirror (no doubt using his alchemical techniques). It was this, rather than his theoretical or empirical accomplishments, that gained him the election to Fellow of the Royal Society on 11 January, 1672.

Newton retained his Fellowship throughout his active scientific career, although since he was based in Cambridge, he seldom attended meetings of the London-based Society. Rather, it was often the territory of his rivals, particularly Robert Hooke, who became Curator of Experiments and then Secretary of the Society during this period.

By the time Newton became President, on 30 November, 1703, the Royal Society had fallen on hard times. The last few Presidents, including Samuel Pepys and Newton's patron Charles Montagu, had been non-scientists who had at most a dilettante interest in the goings-on. In fact, you would have to go back to Christopher Wren in 1682 to find anyone with a serious commitment to science in the role. Few of the members had any interest in the financial running of the Society, and as a consequence it was insolvent. And now, to cap it all, the Society faced eviction from its rooms.

Shortly after becoming President, the aged Newton - who had had at least two full careers since he last did any noteworthy scientific investigation - presented his Opticks to the Society2. Like the Principia, this was in three volumes (a planned fourth was to contain a 'Unified Theory of Everything', which Newton never achieved). Even more so than the Principia, this was a wide-ranging book. As well as finally publishing his early experiments with prisms, Newton ran through a laundry-list of virtually every unpublished scientific idea he had ever had, even touching on Biblical topics such as Noah's Flood. But it cemented Newton in the mind of both the public and the Society as the pre-eminent scientist of the age, paving the way for the longest Presidency in the history of the RS3.

Newton's tenure as President was undoubtedly long and successful, but it could hardly be called a model Presidency. Newton regarded the RS as his tool. His power was absolute, his presence at meetings was, until his final illness, almost invariable. For example, in 1710, Newton seems to have fallen out with John Woodward, the owner of the Gresham College rooms in which the Royal Society was housed. Woodward was expelled from the RS; Newton took care to find out who had voted against the expulsion, and marked their names on a list with a cross, indicating that he intended to have them expelled as well.

In the meantime, the RS now needed to find itself new accommodation. Newton had introduced membership fees for the Society, and had supervised some astute investments in stocks such as the East India Company, and by 1710 they were able to finally purchase a property of their own in Crane Court, rather than relying on loaned rooms in colleges. The meeting to rubber-stamp the move was fractious, and there were bitter (but anonymous) complaints afterwards about the way that Newton had overridden all opposition. The next year, Newton drew up an official list of rules, and employed liveried doormen. He also drew up a 'hit list' of council members he wanted voted out - another example of Newton's need to be in absolute control.

In his feuds with both Leibniz and Flamsteed, Newton managed to manoeuvre matters so that the disputes fell under the judgement of the Royal Society, and in both cases he did not hesitate to rig the committees to ensure that their results were favourable to him.

The new rules that Newton introduced also served to emphasise the role of President. A ceremonial mace was to be placed on the table only when the President was present; all comments should be addressed to the President, with no audible side-chat. Some of these were dropped immediately Hans Sloane took over after Newton's death.

Newton also used his influence to ensure preferential placements outside the RS for long-time allies. Halley was gifted the Savilian Chair of Geometry at Oxford, for instance. All of this was noted by Newton's enemies, especially John Flamsteed, but aside from some acerbic missives, there was little they could do to dent the great man's power.

Eventually, ill health separated Newton from the Society. From 1725, his exemplary attendance record began to decline sharply. Even so, Newton remained President until his death in 1727.

Telescope sketch supplied by the Library of Congress
1The origins of the Royal Society are complex, involving precursor organisations such as the loose alliance known as the Invisible College, and a sister organisation based in Oxford. During the Civil War, all Society activity ceased. In the immediate post-restoration years 1660-3, the group began to meet again and gained their Royal Charter. 2During his presidency Newton tried to ensure that a scientific experiment was performed at every meeting, thus emphasising his dedication to experiments as the root of science.3Since the Royal Society has now adopted five-year terms for Presidencies, it seems unlikely that Newton's 24-year reign will ever be topped.