The Perseid Meteor Shower Content from the guide to life, the universe and everything 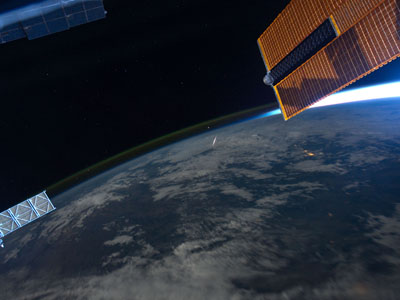 I remember camping with my wife and niece in a park west of Tampa when we spent many hours watching the shower (of course we had to look to the north at this latitude). There were dozens of 'shooting stars' each hour! It was a magical night.
– an h2g2 Researcher

Meteor showers1 are the result of the Earth passing through the debris trail left behind from a comet's last orbit. The timing of the showers can therefore be predicted and some shows are more spectacular than others, depending upon the amount of debris hitting the Earth's atmosphere. The best meteor shower in the Northern Hemisphere is called the Perseids, which gets its name from the area of sky that the radiant (where it appears that the meteors come from) lies in - the north-eastern sky in the constellation of Perseus 'the hero'. It is one of the most observed meteor showers every year. This is due in part to the fact that it occurs at the height of the Northern Hemisphere's summer season, making conditions relatively comfortable for observers. It's also reliable and very active.

When and Where to Look

Usually active between 23 July and 20 August, this famous meteor shower normally peaks in the early morning hours of 12/13 August. These dates can vary; the earliest Perseid meteor in recent years was logged on 14 July in 2009. Perseids can be counted upon to provide displays of 50-75 meteors per hour during the peak, but the Moon's phase is crucial - viewing should be when the Moon has set, otherwise moonlight will make it hard to see the dimmer meteors. However, even with moonlight, observers can still expect a good show of brighter meteors.

Because the swarm of rocks that makes up the Perseids is quite spread out in space, the Earth moves through them over a period of weeks, reaching the thickest part of the rocky cloud around 12/13 August. This is called the 'maximum', and is when the most meteors can be seen in any given time period. Meteor observers try to count how many they see per hour, and there are some electronic devices that can easily capture every single one if you don't want to sit out all night2. At the 'maximum' it's not unusual to see about 60 meteors per hour, although some years have had as many as 200 - that's roughly one every 18 seconds!

Meteor showers are amazing to watch, especially when you consider what is really going on - chunks of rock, some the size of small cars, plummeting through the upper atmosphere, exploding and burning up as they hit the air. And they're pretty too! Nearly half of these cosmic grains also leave 'persistent trains' - you can see their glowing trails for a second or two after the meteor itself has burned away. Here are some handy tips for a great Perseid experience:

With a bit of luck, you may even spot a fireball, which is cometary debris approximately the size of a pebble (compared to the dust which causes meteors) streaking through Earth's atmosphere. Have a great time, and don't forget to make lots of wishes!

You wouldn't have time to aim and capture meteors with an ordinary, hand-held camera, they are so quick even if you're looking in the right direction! Therefore we give thanks for websites such as Astronomy Picture of the Day (APOD) which have provided us with a wealth of wonderful images over the years. Enjoy the APOD Perseid images listed below which were captured by photographic wizards for our delectation:

And here's a really cool animation showing how we manage to see the Perseid meteor shower.

An extremely rare Earth-grazing meteor procession occurred on 20 July, 1860, which falls within Perseid parameters. Landscape artist and amateur astronomer Frederic Edwin Church (1826-1900) and his wife Isabel were honeymooning in the Catskill Mountains when they witnessed the spectacle, which Church was inspired to paint. The influential poet Walt Whitman (1819-1892) referred to the same celestial event in his book Year of Meteors (1859-60):

Nor the strange huge meteor procession, dazzling and clear, shooting over our heads,
A moment, a moment long, it sail'd its balls of unearthly light over our heads,
Then departed, dropt in the night, and was gone.

The train of fireball meteors may just have been sporadic, unconnected to the famed Perseid shower. After all, the Earth resides in a cosmic shooting gallery, and we are constantly being bombarded by space debris. It's just that most pass unnoticed because their spectacular show happens over Earth's vast bodies of water. But the fact that the 20 July, 1860 event was witnessed by both a wonderfully talented artist and a great poet some call 'the father of free verse' was serendipitous indeed. We don't need a photograph when we can see it through their eyes and imagine what it must have been like to witness. And the Perseid Meteor Procession does have a nice ring to it.

Comet 109P/Swift-Tuttle is the progenitor of the Perseid meteor shower. Although it was known in antiquity, the comet was named after its co-discoverers in the 19th Century, American astronomers Lewis Swift (1820-1913) and Horace Parnell Tuttle (1837-1923). 109P/Swift-Tuttle is a periodic comet which comes around every 133 years. It has this regular period due to being in orbital resonance with Jupiter; for every 11 jovian years, the comet completes one orbit. Comet Swift-Tuttle is on the list of potentially-threatening NEOs (Near-Earth Objects) at NASA's Jet Propulsion Laboratory. This is somewhat worrying - the size of its nucleus is 16 miles (26km) wide and with its speed of 60km/s we're talking in terms of planet killer rather than extinction level event. If such a collision were to occur, the only hope for humankind would be that we had already left the planet and migrated to some other world. Luckily for us, the comet's next return visit in August 2126 is projected to be some 14 million miles (22m km) away from Earth. That's if no other celestial body affects it in the meantime, which cannot be predicted. Perhaps one of the wishes you make on the comet's offspring shooting stars could include one for the future safe passage of Comet 109P/Swift-Tuttle through the inner Solar System.

1The American Meteor Society website contains a lot of great information about meteor showers.2Use an old analogue television aerial and listen on about 88MHz.3The zenith refers to when the radiant is overhead, and the HR would be expected under ideal conditions at that time.