The Ultimate Disney Classic Animated Film Guide: 2010-2014 Content from the guide to life, the universe and everything 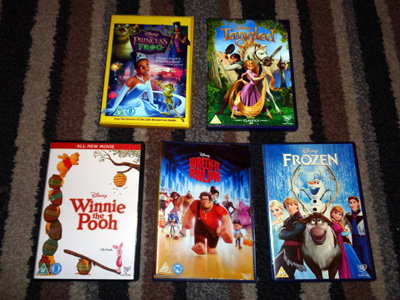 In the first decade of the 21st Century, Walt Disney's animation department had frequently tried to change their image, only to find little success with the films they were making. Disney's animated films had included Treasure Island in space, Chicken Little with aliens and even a film about cows. Consequently the father of all animation studios was outperformed at the box office by animations by rivals Pixar, DreamWorks and Blue Sky Studios. Then John Lasseter was appointed Chief Creative Officer of Disney, and he had a revolutionary idea.

What if, instead of constantly trying to reinvent themselves, Disney instead concentrated on making the films they traditionally did well? So, as they had had success with films about princesses in the 1930s, 1950s, 1980s and 1990s, why not embrace films featuring princesses and revisit one of their most beloved characters?

Suddenly the audiences that had stayed away through the constant chopping and changing returned in droves, making one film in particular the must-watch film of 2014.

In the last 77 years, the Walt Disney Studio has released over 50 animated films it has labelled 'Classics'. The first 49 of these were made between 1937 and 2009.

This film began as a traditionally animated project, only to be changed to CGI under the reign of Michael Eisner, Disney's Chief Executive from 1984 to 2005. The film's title Tangled was chosen to be deliberately gender-neutral, as Disney's marketing department felt that one of the reasons that The Princess and the Frog (2009) had not been as profitable as had been hoped was because it had the word 'princess' in the title.

The first 3D Disney musical, it became their most commercially successful film since The Lion King and proved that the previous policy of avoiding princesses and fairy tales was flawed.

The last traditionally animated Disney film to date. Winnie-the-Pooh had long been Disney's second most successful set of characters, after Mickey Mouse and his friends. Yet in the early 21st Century it was suggested that they were losing popularity, and so it was decided to make a new film featuring them to combat that.

Uniquely the film is true to AA Milne's vision of the characters. His original stories are the inspiration for the storyline and many of the film's personnel spent time in Ashdown Forest visiting the area where the real Christopher Robin Milne had played and grown up, including the genuine Poohsticks Bridge. This ensures that the film looks like the real Ashdown Forest, and not a generic wood; one of The Tigger Movie's weaknesses was that its setting did not look at all like Sussex.

The quest for verisimilitude ensured that an English boy was cast as Christopher Robin; the original The Many Adventures of Winnie the Pooh in 1977 had featured three different American boys as Christopher Robin, resulting in his voice changing throughout the film. Controversially his appearance has also been changed. Although it is true that the original design for Christopher Robin was the generic Disney boy look of the 1970s-80s2 changing it 35 years later after it has been well-established seems very much like fixing the barn door not only after the horse has bolted, but the land the farm once stood on has since been sold, redeveloped into offices and now the offices have been bulldozed to make way for a supermarket.

As it is based on AA Milne's original stories, part of the plot had inspired a previous Disney Winnie the Pooh feature. In Pooh's Grandest Adventure3, Pooh and his friends misread a note from Christopher Robin saying he has gone to school as a call for help as he is trapped in Skull.

The film was a moderate success, and is very enjoyable. One of the highlights is the music by husband and wife team Robert Lopez & Kristen Anderson-Lopez, which is able to keep to the high standard set by the Sherman brothers in the original. Their music would so impress Disney executives that they would be offered the opportunity to write the songs for an upcoming Disney animated film called Frozen.

The animation is very imaginative and detailed, right down to the graffiti on the walls of Game Central Station including the immortal All your base are belong to us. There are numerous hidden cameos and references, such as minor Sugar Rush character Minty Zaki's name being inspired by the name of Japanese animator Hayao Miyazaki. Walt Disney's birthday shows as the game's high score.

The film was released exactly 75 years after Snow White and the Seven Dwarfs. The character of King Candy is based on Ed Wynn's portrayal of the Mad Hatter in Alice in Wonderland.

Frozen is the most successful animated film to date and won two Oscars - one for Best Animated Film and the other for Best Original Song for 'Let It Go'. Frozen, released in winter 2013, was still in cinemas the following Christmas, having had an almost unbelievable appeal to the under 10s throughout 2014. Soft play centres offered Frozen-themed parties, the names 'Elsa', 'Olaf' and 'Kristoff' appeared on the '100 most popular baby names list' and Frozen dolls were the must-have Christmas toy. A Broadway musical is in development.

It is funny how, in the film, everyone is convinced that they are suffering from an eternal winter after only a few hours. For a film which repeatedly states that you cannot truly love someone after only a day, it seems odd for it to declare that the cold spell will last forever within that same time span.

In 2014 Sing-Along Frozen was released. This was essentially a version with subtitles - it has a snowflake utilising the bouncing-ball technique first created by Fleischer Studios for their Song Cartoons series in 1925. Although a large proportion of the target audience for this was too young to be able to read the subtitles, this did not prevent their enthusiasm in joining in and singing the songs, regardless of whether they knew what the actual words were. The film had first been introduced with a comic teaser trailer showing an encounter in which Sven tries to eat Olaf's carrot nose.

This film gave Disney a second Best Animated Film Oscar win in a row. Like Baymax itself, Big Hero 6 is a film with a heart. After the last film, in which two orphaned sisters learn to love each other, this one tackles brotherly love between orphans and the stages of grief. The film's appearance is breath-taking too, especially the setting, which is a Japanese-influenced version of San Francisco that gives a new and unique appearance to a city familiar from countless films.

Marvel Entertainment had been purchased by the Walt Disney Company in 2009, leading to Disney expressing increased interest in releasing film adaptations of Marvel characters especially as Marvel Studios had been enjoying considerable success with the Avengers films since 2008. By choosing a more obscure character for their first adaptation, Disney had the freedom to make several changes from the original comics, perhaps most noticeably to Baymax's appearance. An image of Marvel mastermind Stan Lee appears as a painting of Fred's father.

DisneyToon Studios, which had previously specialised in making sequels to popular Disney films before the appointment of John Lasseter, now continued to produce films based on their Tinker Bell franchise, also known as Disney Fairies. They also created a new franchise inspired by Pixar's Cars films. These, Planes and Planes: Fire & Rescue followed the adventures of a small propeller-driven crop-dusting aeroplane that initially wishes to enter air races and later qualifies as a firefighting aircraft.

ImageMovers had been founded in 1997 by Robert Zemeckis and concentrated on mo-cap6 films. These included The Polar Express (2004), Monster House (2006) and Beowulf (2007) for Warner Brothers, Columbia and Paramount respectively. Disney formed a joint enterprise with them entitled ImageMovers Digital, releasing a 3D adaptation of A Christmas Carol in 2009 starring Jim Carrey as Ebenezer Scrooge. Following this success, their second joint production was Mars Needs Moms, a film that cost approximately $150 million to make. Mums, however, felt no need to bring their families to see the film, so it clawed back less than $40 million at the box office, placing it in the top five biggest box office losses of all time and Disney's biggest failure. Disney immediately severed all ties with ImageMovers, despite having previously announced the partnership had planned to make a Who Framed Roger Rabbit sequel/remake and a controversial Yellow Submarine remake. Both projects were now abandoned.

Frankenweenie is a far more accomplished film, a black-and-white stop-motion 3D film remake of Tim Burton's 1984 short film that parodies Mary Shelley's Frankenstein. This is the third stop-motion film Disney have released, all of which involved Tim Burton, who also made Corpse Bride (2005) for Warner Bros. Curiously, Frankenweenie was billed as a 'Disney Presentation' rather than by Walt Disney Animation Studios.

Released through Disney's Touchstone Pictures label, Gnomeo and Juliet is a very enjoyable film financed by Disney but produced by Elton John's company Rocket Pictures. A garden gnome retelling of Shakespeare's story of Romeo and Juliet, it features many of Elton John's song.

UTV, United Television, was an Indian television company founded in 1990 and purchased by Disney in 2011. In 2012 they made an animated adaptation in Hindi of Indian epic The Mahabharata entitled Arjun: The Warrior Prince. This film, which has had a limited release outside India, followed Arjun from his childhood until adulthood.

In 2006, Disney had purchased Pixar for $7.4 billion. Although Pixar remained an independent production company, all Pixar films made since then have been marketed as by 'Disney | Pixar'

Pixar continued their run of success. Three of the four films released in this period were sequels7, with the only original film, Brave, using (though inverting) the well-established Disney princess formula. Despite this none of the films are mere retreads of what has been before, each taking the characters in entirely new directions.

1An actress - she played Trillian in The Hitchhiker's Guide to the Galaxy film.2Aside from hair, eye and skin colour, the appearance of Mowgli, Wart, Christopher Robin and Taran are very similar.3Also known as Pooh's Grand Adventure and The Search for Christopher Robin.4Also The Secret of the Wings.5Also The Pirate Fairy.6Motion-capture, where an actor's facial expressions and body movement are replicated on a computer-generated character, rather than programmed by an animation artist. Also known as Performance Capture.7Technically speaking Monsters University is a prequel, however it is still a film based on already established characters.