Birthdays Content from the guide to life, the universe and everything 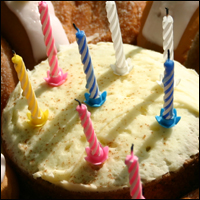 Birthdays are something many of us eagerly look forward to as children, enjoy as an excuse for a party as young adults and dread as we get older because it advertises our ever-increasing age. Most cultures celebrate the anniversary of people's birth, but the significance varies between countries, religions and peoples.

For young children in particular, all birthdays are special as they have had so few and they change so much between them. As people grow older birthdays reduce in significance. Some special ones are listed below.

After this point, the most important birthdays are when a person enters a new decade, such as turning 30 or 40. Turning 30 is often seen as the end of one's youth, so some people will continue to claim to be 29 well into their thirties! In France 25-year-old unmarried women traditionally put a hat on church statues of St Catherine on her Saint's Day. Germany has a different tradition for unwed women who reach 30 - polishing doorknobs until they are kissed by an unmarried man2. See the final paragraph of the Entry on German Wedding Traditions for further details.

Similarly, turning 40 has been seen as the beginning of middle age but this attitude is becoming rarer as people live longer – witness phrases such as '50 is the new 40'.

Twenty-five, 50 and 75 are also slightly more significant as they are fractions of a century - turning 25 means you have been alive for a quarter of a century.

In Japan certain birthdays are seen as the herald of a year filled with bad luck. These are 25 and 42 for men and 19 and 33 for women. Men also have a party when they turn 60, which is seen as the beginning of a second infancy. Their 60th birthday is called kanreki and recognises that the traditional Japanese calendar has cycles of 60 years - so the 60th birthday is a return to the sign under which the man was born.

In the UK, when a person reaches 100 years old, they or their family can apply for the Queen to send them a congratulatory message on their birthday. This can be applied for again at the age of 105 and every year subsequently.

In the USA if you make it to 100 years old you will be congratulated on national television by a man named Willard Scott, in a feature on the Today Show.

Celebrating a Birthday - Or Not

Not everyone, you may be surprised to learn, actually celebrates birthdays. Jehovah's Witnesses, for example, do not observe birthdays. They don't celebrate Christmas either, because it also is a birthday.

The Vietnamese celebrate birthdays, but not in the same way as most peoples. The actual day of birth is not remembered, but instead everyone celebrates their birthday on Tet, the Vietnamese New Year.

In some countries, such as Greece, Italy and France, many people are named after saints. Birthdays are celebrated but 'namedays' are also enjoyed. A person's nameday is the Saint's Day of the saint after whom they were named. Sometimes the birthday and the name day may be the same, if someone was named after the saint on whose day they were born. The advantage of this is that if you have a calendar, you can tell when a friend's nameday is, and so don't have to actually remember!

Birthday celebrations may not take place on the actual day if it is impractical for some reason3. In such cases the party may occur at a weekend. In some countries this could be either before or after the day itself, but in Germany it is simply not done to celebrate a birthday before it actually takes place. No one will wish you a happy birthday in advance, nor should you open presents early, no matter how tempting. One way around this is to celebrate on the night before but not call it a birthday party until midnight. This is called reinfeiern, or 'celebrating in'.

Spare a thought for those poor souls who are born on 29 February. This, of course, is the day added every leap year, so technically these people only have a birthday every four years! Most will celebrate their birthday either on 28 February or 1 March on non-leap years.

Danes like to let everyone know when someone is celebrating a birthday by flying a flag outside the house.

Parents will often organise a party for their young children. This may involve party food such as ice cream and jelly, and will doubtless be a very noisy affair as the child and their friends play games. The party may take place at home or parents may take children out, such as bowling or to a zoo. In Mexico parties usually involve piñatas! The birthday child is blindfolded and hits the piñata until it breaks open, when all the children at the party share the contents.

For adults, celebrations may involve a nice dinner with friends or a night on the town. Usually it is up to the birthday boy or girl to decide what they want to do. At offices, they may bring in cakes for everyone. If part of the celebration takes place at a bar or pub, in some countries it is usual for friends to buy the drinks of the person celebrating, but in Germany they buy drinks for everyone else.

A birthday cake is traditional. This will often be topped with candles4. Traditionally there is a candle for each year of their life, but the older one gets, the less practical that becomes! The candles are blown out, preferably in one breath, and the birthday boy or girl is often told to make a wish. After this the cake is cut and anyone who wants a piece can have one.

When the cake is brought through, or at some other point in the celebration, it is usual to sing a congratulatory song. In English-speaking countries this will be 'Happy Birthday To You' but other countries have their own songs. Most Spanish-speaking countries sing 'Cumpleaños Feliz', which is to the same tune and is often followed by another song called Feliz, feliz en tu día. Mexican celebrations normally involve singing Las Mañanitas.

Family members usually buy presents for anyone in their family who is celebrating a birthday, and close friends often do as well. Sometimes the person will ask for something specific they would like, but other people will leave it up to the purchaser - in which case finding something suitable can be a challenge! In some countries, including Australia and New Zealand, it is traditional to give a young person turning 21 a key. This acknowledges that they are ready to accept the adult responsibility of coming and going as they please. Of course, the gift is purely symbolic for the vast majority, who will probably have had a key to their house for years. These days the keys themselves are symbolic too — perhaps a card bearing a picture of a key rather than a working door key.

Sending a birthday card is also usual. You can even buy 'Happy Belated Birthday' cards if you're forgetful!

1This literally means 'daughter of the commandment', though it is commonly used to refer to the ceremony itself as well as the girl who has reached this age.2Form an orderly queue, gents.3This may depend on the nature of the celebration planned!4Though in Germany, candles are kept separate in special candle holders.5Although there is evidence that Jesus was not born in December at all.