Pinata - A Party Game Content from the guide to life, the universe and everything 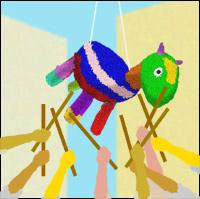 Piñata is a Spanish word, and if you want to sound like you are in the know at the school gates or at work, it is pronounced Pin-yah-ta. The word is derived from the Spanish verb apinar, meaning to join, or to bind in a bundle. A piñata is a hand-made papier-mâché and cardboard model decorated with brightly coloured tissue paper, designed to be filled with sweets, small toys and treats. Made to be broken, these models are nevertheless fashioned with enormous care and come in all shapes and sizes, from traditionally shaped stars to contemporary footballs.

The best place to get a piñata is from a party supplies shop. An extensive range of styles can be found online from party e-tailers. The added advantage of this is you'll also usually find all the accessories, small goodies and sweets you'll need to go inside the piñata at the same time.

The frame can be built in nearly any shape and ideas for designs can be found in party supply shops or online. Loop the string and tie to the paper clip, tape the paper clip to the frame at a good balancing point. Cover the frame (including the paper clip but not the string loop) with no more than four layers of papier-mâché, the top layer all white (so newsprint doesn't show through the decorations). A hole can be left open for inserting goodies, or one can be cut later. Allow to dry for about 24 hours, then decorate with paints or tissue paper.

History and Origins of Piñatas

Sources say that the piñata started life simply as a painted clay pot decorated with colourful paper and filled with sweets and money. Later it evolved into the intricate papier-mâché figures and forms seen today. Busting a piñata at a child's party or a festival is still very much a tradition in Hispanic countries and has only recently reached the UK where is it proving to be a great hit with young and old alike.

In some communities the breaking of the piñata is given a religious significance. The piñata represents the devil, tempting mankind with the promise of untold pleasure (the treats hidden inside). The blindfolded child hitting the piñata to break it open represents the strength of the Christian faith which must destroy the evil spirit.

What we know for sure is that a piñata, whatever the occasion, creates a spectacular highlight and is the ultimate ice-breaker with something for everyone to enjoy!

Traditionally, the piñata game is played as the highlight of a party – at both children's and adult's parties. It is often used to replace more traditional games such as Pin the Tail on the Donkey or Pass the Parcel as the main event of the party.

The piñata can be filled with nearly anything, though small, fairly light, non-breakable items such as sweets and small toys are best. The piñata should be sufficiently filled that everyone taking part in the game gets at least a couple of goodies.

The piñata should be filled with the goodies before guests arrive at the party so that the treats inside will be a surprise for everyone. To fill the piñata locate the door hidden somewhere under the tissue paper decoration. The door is usually marked with a sticker that reads 'To Open Press Here', and that area will give with gentle pressure. Elusive doors may require the use of scissors or a sharp knife to create an opening by cutting a 'U' shape and pulling the flap up2.

During the party (before the game) the filled piñata can serve as a decorative table centrepiece, especially for a themed party, later taking it to the designated game-playing area for busting.

To suspend the piñata use a strong length of rope or washing line cord to attach to the reinforced loop on the piñata. Select somewhere to hang your piñata, somewhere outdoors is recommended. A branch of a tree, a basketball or netball hoop or a taut washing line all work well. Two adults each holding the end of a long rope taut with the piñata hanging in the middle might work for younger children. Do not hang a piñata from a light fixture (indoors or outdoors) or from any electrical wiring.

While there are several variations on playing the game, outlined here is the most basic version. The rules can be tailored to suit the age and temperament of the guests. The main thing is to have fun!

Piñata games should be played under adult supervision at all times! Even when it's adults playing the game.

Other Uses for a Piñata

Piñatas are not only popular as fun party games, they serve as colourful room decorations and party table centrepieces. They make great corporate giveaways when tied in with a theme and you can even give them as birthday presents – fill the recipient's favourite shape with small presents. Don't forget, a broken piñata can usually easily be repaired and kept as a memento of the party, or used as a child's room decoration.

1An easy papier-mâché paste can be made mixing one part flour with five parts water. Boil mixture for about three minutes, let cool.2It would be best not to cut an opening on the bottom of the piñata so the treats don't fall out before the whole thing is busted.3Broomsticks work extremely well for this, but any managable, sturdy stick with a decent range, about three or four feet, should do.4If the piñata is down, tell the hitter to swing the stick higher and so on. The more laughs the better, especially when adults are playing.