Gnomes Content from the guide to life, the universe and everything 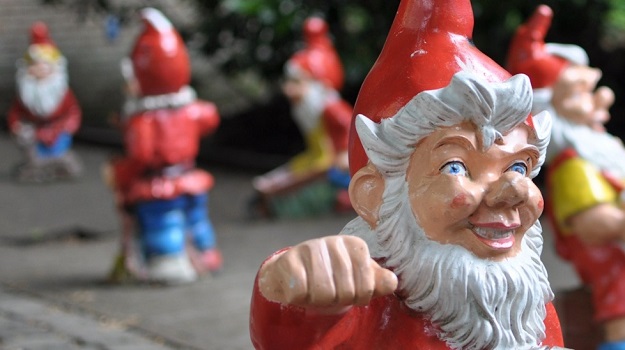 When you consider what the most common garden creatures are, the snail or the slug, or one of the many insects that call the Earth home might spring to mind. However, it is more likely that the gnome is the most prevalent of garden inhabitants throughout the western - and perhaps entire - world. Traditionally, gnomes are very small men or women that mainly live underground in burrows and can be easily recognised by their long white beards, red hats and a love of all things of the earth, especially gold and precious gems.

Although gnomes have been present in world mythology for centuries, it was not until the 16th C Swiss alchemist Paracelsus wrote a treatise describing four species of elemental beings that the name came into common usage. Paracelsus inferred that of the four classical elements, each had a corresponding guardian: air had sylphs, water was awash with nymphs, fire contained the salamanders and earth bore the gnomi. This Latin term was then later corrupted into the English form we are familiar with, 'gnome'.

What's in a Gnome?

The gnome is most often described as an elderly man or woman, both with long white beards and red pointed caps - much like a witch's hat, but scarlet in colour. Gnomes are environmentalists, guardians of all things related to the earth and underground, yet are also consummate miners with hoards of buried treasure1. Their nemesis is the troll. Both the gnome and the troll fear sunlight, as it turns them to stone, but some gnomes can shapeshift into frogs or toads or other small woodland creatures, in order to move about in the daylight hours. While gnomes are benevolent creatures for the most part, they have been known to cause a little mischief at times.

The first recorded written English usage of the term 'gnome' was in 1714 by the poet Alexander Pope in his epic The Rape of the Lock. In the 19th and 20th Centuries, the gnome became an integral part of fairytales and literature concerned with supernatural beings, including the works of JRR Tolkien, who wrote 'I Lam na Ngoldathon - The Grammar and Lexicon of The Gnomish Tongue'. Tolkien referred to the gnomes as the 'deep elves' or the Noldorin, then Sindarin. So, although Tolkien may have written about gnomes and their language, he was in fact referring to elves. Gnomish was thus the precursor to Elvish. Confusing? Undoubtedly. Other fantasy writers to write about gnomes include Terry Pratchett, JK Rowling and Eoin Colfer. Due to being a part of a fantasy world, gnomes are also used as characters in many role-playing games such as WarCraft, Dungeons & Dragons and various forms of LARPing.

There are not many references to the gnome in popular music, but the most notable is probably David Bowie's song 'The Laughing Gnome'. However, in classical music there is the Gnome (or Gnomus) movement from Mussorgsky's Pictures at an Exhibition. Chicago Indie rock band The Gnomes offer something for the more discerning listener2. In the world of television, the 1980s saw the small-screen release of The World of David the Gnome, starring Tom Bosley3 as the voice of David, while Gordon the Garden Gnome is a popular character among young children.

A Little Gnome in the Country

It's better to help people than garden gnomes.
- from the movie Amélie, 2001

Garden gnomes first appeared when, in 1847, Sir Charles Isham used gnome figurines to decorate a rookery at his home in Northamptonshire, Lamport Hall. The 21 small porcelain pieces were imported from Germany and placed in a mountainous diorama, acting as miners. Only one of the original gnomes survives. 'Lampy', as he is known, is on display at Lamport Hall and is insured for £1 million. After Isham 'planted' his gnomes in the garden, the market opened up.

Garden gnomes quickly became an inexpensive and charming addition to many gardens and, made from terracotta and hand-painted, were extremely popular in Britain during the Victorian era. It is now estimated that some 8% of the British population have a garden gnome. Sir Frank Crisp even had a 30-foot model of the Matterhorn built at his home at Friar Park, Henley-on-Thames, which was then populated with an amazing amount of garden gnomes. Later, at the home of Beatle George Harrison, some of the Friar Park gnomes managed to find their way onto the cover of the All Things Must Pass album.

The classic pose of the garden gnome is that of sitting cross-legged upon a red toadstool, fishing pole in hand. More recently, the garden gnome can be found doing just about anything, from gardening to bizarre sexual practices. Some gnomes have also shied away from the traditional garb of red hat and blue jacket to wearing biker leathers and sunglasses or even impersonating celebrities, sporting greats or politicians.

Caring for a gnome - or, indeed, a whole clan - that resides in a garden is hard work and there are some tips for their general care and upkeep. Gnomes are fastidious and love to look their best. A wash every now and then with some hot soapy water and a bit of a scrub behind the ears and around other crevices keeps them spick and span. Moss, mildew and bird effluence tend to cling to gnomes. It is also worth keeping an assortment of gloss paints - reds, blues and greens are the most useful colours - in the garden shed in case a hat, jacket or even nose needs a bit of a touch-up.

As stated, gnomes aren't particularly keen on the sun either, so it is wise to move them about the garden if they spend too long in a sunny spot. Give them a shaded area and their original beauty and colour will not fade as quickly as it might if they remain static. This is also a nice way of keeping any potential gnome-nappers and the neighbourhood animals guessing as to the location of their favoured gnome for kidnapping or territorial marking.

If the worse-case scenario occurs and a gnome is found cracked, missing a vital part of their anatomy or even horribly broken like an egg upon a hard patio floor, the best thing to do is either find some suitable superglue and attend to the injuries or simply ensure the gnome doesn't suffer and perform the appropriate funereal rites4. There are professionals available that can attempt to save gnomes, but sometimes there is simply nothing to be done apart from honour the memory of the beloved.

Even well-cared-for garden gnomes don't have it easy. They are often prey to domestic5 and wild animals in many ways, including being knocked over or urinated on. They are also sometimes the target of pranksters. Many innocent garden gnomes could find themselves returned to nature by such gnome freedom groups as Free The Gnomes, France's Front de Liberation des Nains de Jardins or Italy's MALAG (Garden Gnome Liberation Front), whereas a more violent organisation known as Die Screaming With Sharp Things in Your Head mutilates garden gnomes and displays the results for all to see on the Internet6.

However, other more fortunate gnomes worldwide have either been 'gnome'-napped for, or been willing participants in, globetrotting jaunts. If, however, you don't fancy kidnapping a local gnome or taking yours from the garden, then Gnome on the Go can solve all your gnome-related problems.

There are many books and stories about gnomes, but the following is probably the definitive guide: 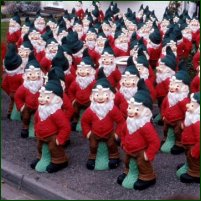 1Swiss bankers are thus often referred to as 'The Gnomes of Zürich'.2Perhaps.3Mr Cunningham from Happy Days.4This is an individual thing. Some Gnomes are buried with honour in the garden they loved; others end up in the trash.5In particular cats.6Not for the faint-hearted.