The Koh-i-noor Diamond Content from the guide to life, the universe and everything 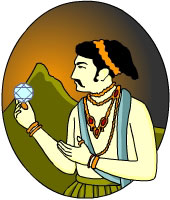 In April 2002, a few days after the death of Queen Elizabeth the Queen Mother, her crown was taken from behind its ultra-high-security armoured glass in the Tower of London and carried in open view through the streets of London, surmounting her coffin as it processed from St James's Palace to Westminster Hall. It remained there during her Lying-in-State as members of the public filed past to pay their last respects to the Queen Mother, the last Empress of India.

Interestingly enough, she had only ever worn this crown once, 65 years earlier, at the Coronation of herself and her husband, King George VI, in 1937. The largest and most important jewel in this crown is the priceless Koh-i-noor Diamond, which had been presented to Queen Victoria by Lord Dalhousie in June 1850. This followed the British annexation of the Punjab, India, after the British had defeated the Sikhs. From that date the diamond became part of the British Crown Jewels.

The Origins of the Koh-i-noor

Some say that the Koh-i-noor was originally found more than 5,000 years ago, and is mentioned in ancient Sanskrit writings. Devout Hindus claim that it was once worn by the great god Krishna, but was stolen from him as he lay sleeping. By contrast, another source has it that the diamond was discovered in a river bed in 3200 BC. The first reliable evidence of it, however, is in the writings of Babur, the founder of the Mogul Empire, who names this diamond as part of the treasure won by Ala-ud-deen (Aladdin) at the conquest of Malwah in 1304 AD. The Moguls acquired the diamond in 1526.

At that time it was said to weigh 793 carats, but through some incredibly ham-fisted cutting and polishing by a jeweller named Borgio it was reduced to 186 carats. Borgio had been working on it for years, but so enraged was Aurungzebe (the Emperor at the time) at the result that he confiscated all Borgio's worldly goods and contemplated executing him as well.

How the Koh-i-noor Got Its Name

The Koh-i-noor remained with the Mogul emperors until 1739, when Nadir Shah of Persia, the conqueror of India, got hold of it after laying siege to Delhi. According to legend it was a member of the harem of the Mogul Emperor Mohammed Shah who told Nadir Shah that the jewel was kept hidden in the Emperor's turban. So, at a victory celebration, Nadir used a cunning ploy. He suggested that he and the Emperor partake in a well-known Oriental custom whereby the two leaders would exchange turbans. This would symbolise their close ties and eternal friendship. For the Mogul to refuse would have been a great insult to the conqueror. Later that night, when Nadir Shah unfolded his host's turban he duly found the gem, and cried out 'Koh-i-noor', which means 'mountain of light'. Nadir Shah then brought the jewel back with him to Persia.

From Persia to Afghanistan to India

After the death of Nadir Shah the Koh-i-noor came through devious means into the possession of Ahmed Shah, the Lord of the Royal Treasury and an Afghan chief. Then Ahmed Shah, after a series of long and fierce battles, established himself in Kabul as King of Afghanistan, and held on to 'the great diamond' as a symbol of his authority. Through various subsequent upheavals and rebellions the diamond came back into the possession of the Indian princes, until the annexation of the Punjab secured it for the British.

The British colonial officials found the Koh-i-noor in 1849, in the treasury of the Punjabi capital, Lahore. They confiscated everything they found in the treasury as compensation for having to fight against the Sikh army, who didn't think much of the British claims to power in India.

Sir John Lawrence, Governor General of India, used to tell the story of how the Sikhs handed the diamond to him in a plain old battered tin box, which he then forgot about. Weeks later London was asking him if he had any idea where the diamond was. He replied in the negative. Then came a second, more urgent letter, in which London expressed a desire to present the jewel to the Queen. Following another negative reply, the Prime Minister himself, Lord Palmerston, sent a plea. Sir John searched high and low but couldn't find it, until one of his servants remembered there was 'a bit of glass in an old tin box'. Luckily the servant was the sort of person who never throws anything away, and eventually discovered it in the tool-shed. There it was, not even wrapped - the most famous gem of India, the fabled Koh-i-noor, the 'Mountain of Light', the jewel to die for (and very many unfortunate people had done just that). And Lawrence didn't have the faintest idea what it was.

The Curse of the Koh-i-noor

The British were rather disappointed at the lack of 'fire' in the diamond, and so they decided it should be re-cut to make it more brilliant. This further reduced it from 186 carats to its present size of just under 109 carats. Over centuries of murder and mayhem, brutality and torture - not to mention deceit and duplicity - the stone had long carried with it a curse that misfortune would always befall its owner, though any woman wearing it would remain unharmed. There was some talk of whether Queen Victoria would return the stone because of the curse. Defiant as always, however, she was adamant it should instead be re-cut and set in a tiara along with over 2,000 other royal diamonds.

In October 1997, Queen Elizabeth II made a State Visit to India and Pakistan to mark the 50th anniversary of Independence. Many Sikhs in India and Britain used the occasion to demand the return of the Koh-i-noor diamond, which had been won from the Sikhs (whose ruler was Duleep Singh, a young boy at the time) after a fierce battle. But the Sikhs had surrendered, and one of the terms of the surrender was that they hand over the diamond. A simple Punjabi farmer in his 70s, Beant Singh Sandhawalia, has claimed to be the last surviving descendant of Duleep Singh, through adoption. He wrote to Buckingham Palace and to Prime Minister Tony Blair asking for the return of the Koh-i-noor. Sandhawalia says he doesn't want the Koh-i-noor for himself, but will give it to the museum at the Golden Temple of Amritsar, the holiest Sikh shrine.

The Sikhs, however, are not the only people who want the diamond. In November 2000 the Taleban regime demanded the return of the Koh-i-noor diamond to Afghanistan, saying that the British should hand the gem back to them as soon as possible. They have claimed that it is the property of Afghanistan, and that history shows that it went to India from Afghanistan and therefore the Afghans have a stronger claim than the Indians. While an Indian parliamentary committee has insisted that the gem be sent back to New Delhi, the Taleban have claimed that Maharajah Ranjit Singh (the father of Duleep Singh) stole it from Afghanistan while he was ruler of the Punjab.

British officials take the view that the multiplicity of competing claims makes it impossible to establish the gem's former ownership. Thus, for now, at least, it looks likely to remain one of the jewels in the British Crown.