Aragorn - A Character from 'The Lord of the Rings' Content from the guide to life, the universe and everything 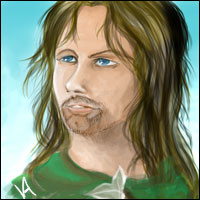 JRR Tolkien's books of Middle-earth proved to be some of the best selling books of all time. Tolkien's aim was to provide a story with such a strong, believable background that the characters could actually be from a forgotten era of our own world.

One of the main characters in the Lord of the Rings trilogy is Aragorn, heir to the throne of Gondor and Arnor. Tolkien establishes a rich background for Aragorn, giving him stability and, above all, a believability of character.

The Birth of Estel

Born in the year 2931 of the Third Age, Aragorn was given the name Estel, which is Sindarin1 for 'hope'. Aragorn received this name from Elrond2 when his mother took him to Rivendell at the age of two, after the death of Arathorn, his father.

While residing in Rivendell, Aragorn became infatuated with Arwen Undomiel, the beloved daughter of Elrond. Elrond asked Aragorn to forget about her as she was immortal and should not be partnered with a mere human. However, the bond that grew between Aragorn and Arwen was too deep and strong for either to ignore, no matter what differences might exist between their people.

Unbeknown to Aragorn, he was heir to the throne of Gondor and Arnor. Until the age of 20 this information was kept from him. Ultimately, Elrond revealed to Aragorn his true identity and origin, and gave Aragorn the Ring of Barahir and Elendil's broken sword, Narsil - symbols of his rightful position at the head of Gondor. After learning of this secret, Aragorn chose to begin a journey through the wilderness, travelling across the lands of Middle-earth.

The Coming of Aragorn

Being a Dunadan3, Aragorn had a long life and for seventy years he used the war cry 'Elendil' against Sauron's4 minions, sending them into flight. Aragorn learned to be inconspicuous and composed in difficult situations, and took on the name of Strider while amongst the common folk, which is the name Frodo and friends first knew him by.

During his travels, he befriended Gandalf the Grey, a wizard and counsellor5, who taught him the values of discretion and tolerance. He also learnt the art of wilderness medicine, that enabled quicker healing through the application of simple natural remedies made from herbs, flowers and weeds. This learning would stand him in good stead in years to come.

Aragorn travelled to Gondor, to the city of Minas Tirith6, and became a great warrior under the pseudonym Thorongil7. Under the Stewardship of Ecthelion II, he was part of a force that marched on Umbar and defeated the Corsairs by killing the Captain of the Haven.

Aragorn's travels took him to Lothlorien, another home for the elves, where he again met Arwen. As he was no longer a boy, but a strikingly good-looking man, Arwen returned his feelings and declared her love for him, forsaking immortality. Elrond forbade this, decreeing that Aragorn could only have the hand of his daughter if he took on the mantle of the King of Gondor and Arnor.

Aragorn left Lothlorien and wandered for many years until Gandalf the Grey sought him out in the year 3001 of the Third Age. Gandalf sought Aragorn to seek out and capture Gollum8, a vile creature with precious knowledge of the deeds and intentions of the forces of darkness. The trail of Gollum had been lost and finding him proved long and seemingly hopeless. In the year 3009 of the Third Age, Gandalf asked Aragorn once more to seek out the creature Gollum. Aragorn searched throughout the vales of Anduin, Rhovanion and Mirkwood, until he came to the borders of Mordor, home to Sauron and his forces. Ultimately, Aragorn caught Gollum in the stinking mire of the Dead Marshes, north-west of the dark mountains surrounding Mordor. With Gollum captive, Aragorn travelled to Mirkwood where the vile creature could be questioned by Gandalf.

The Road of Fate

When Aragorn travelled to Bree to look after the Hobbits, Frodo and his friends, he joined the Fellowship of the Ring and pledged his sword in the fight to help Frodo destroy the One Ring.

During the Battles of the Ring, Aragorn and his soon-to-be-subjects not only had to face one terrible force, but two. Sauron and Saruman had joined forces in a dark union, which meant that the Alliance of Free People had to overcome the might of both of the two towers, Barad-Dûr and Orthanc9, respectively.

Saruman's forces found defeat at the Battle of Helm's Deep faced with the courage and determination of the Rohirrim. Gandalf mustered a great force of the wandering equestrians to help turn the tide of battle. In addition, riled by the destructive activities of Saruman, the enchanted forest of Fangorn10 rose against the wizard's forces killing Orc soldiers as they fled the battlefield.

With the forces of Mordor still to contend with, Aragorn had to make the decision to claim the crown of the King of Gondor. Seeking assistance in the battles to come, he took the road to the Path of the Dead. This secret and half-forgotten way under the Dwimorberg11, and the mountains of Ered Nimrais, contained a vast and cursed army who fled to the mountain instead of coming to the aid of their king, Isildur, in the great battle against the Dark Lord at the end of the Second Age. Only the King of Gondor had the ability to tread the Paths of the Dead and lift the curse of Isildur once the dead army had fulfilled its oath. Aragorn took this road, and gained their allegiance as the true heir, then set off for Gondor to turn the tide of the war against The Dark Lord.

The Return of the King

After the destruction of the ring by Frodo and Sam, and the subsequent downfall of Sauron, Aragorn, with his people behind him, became the King of Gondor and Arnor and took on the name of Elessar Telcontar (Elvish for Elf-Stone Strider) which he was known by from the date of the coronation onwards. With Elessar now King, he was then free to marry his beloved Arwen. Between them, Elessar and Arwen had a son, Eldarion, and several daughters.

During his reign, Elessar gained back Gondor's might and glory. After the end of the War of the Ring, Elessar took the Shire under his wing. He decreed that no man should approach within sight of the borders of the Shire, leaving the Shire folk in peace and harmony and without the worries of the outside world. He followed his own decree and never went further than the Great Bridge12.

Elessar ruled a great and renewed Gondor for 120 years and passed away on 1 March of the year 120 of the Fourth Age. They say that Elessar grew tired and knew that death was calling him. He bid farewell to his son Eldarion, passing to him the Sceptre and Crown. Elessar then went to the House of Kings in the Silent Street. There he laid himself down on a bed of stone, prepared for his passing, and said his goodbyes to his beloved Arwen. Elessar slipped into a deep sleep, from which he never awoke.

Arwen went cold with her grief for Elessar. She ended her days in Lothlorien, broken and alone as the elves had left decades before and left her behind by her own choice. Arwen died on the hill where Aragorn and she had confessed their love to each other for the very first time.

You can find information about the other individuals involved in the many stories of Middle-earth in this character overview, which provides a brief outline of all the characters and storylines.

For a complete history of Middle-earth from the beginning of time until the end of the Third Age, read The Silmarillion. This book is read in a different context to Tolkien's other books, with verses and third person writings; it is not too dissimilar to the way the Bible is written.

1 The most common language of the elves of Middle-earth.2Half-elf and master of Rivendell, he made his home in Middle-earth for some 6,500 years and played a pivotal role in the events leading up to the destruction of the dark powers that threatened the Free People.3A remnant of the Exiles of Númenor who settled in the northern lands of Middle-earth.4One of the Maia, divine and immortal beings who most commonly lived in the lands to the west. Known as the Dark Lord, for thousands of years he has been intent on conquering and controlling Middle-earth. Consult The Major Villains of 'The Lord of the Rings' for further information.5He was also a Maia, like Sauron, but intent to rid Middle-earth of the foul schemes of the Dark Lord.6The Capital City of Gondor, originally named Minas Anor.7Meaning 'the Eagle of the Star.'8One of the bearers of the One Ring after it was sliced from the hand of Sauron. Bilbo Baggins gained the Ring from Gollum following a contest of riddles, and later passed it on to his nephew Frodo Baggins of the Shire.9A seemingly indestructible stone tower fortified within the great Ring of Isengard.10The forest was inhabited by Ents, or Shepherds of the Trees, ancient tree-like creatures set with the purpose of protecting the forests of Middle-earth.11Also known as the Haunted Mountain.12The Great Bridge crossed the River Baranduin, or Brandywine, on the eastern border of the Shire.