Telling Frogs from Toads Content from the guide to life, the universe and everything 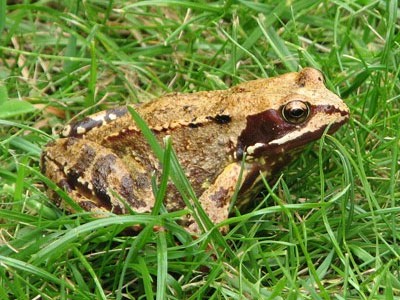 There seems to be a great deal of confusion, at least among urbanised Americans, between frogs and toads. Too often, a frog is called a toad, or vice versa. Most people just call out 'Yuck!'.

It's simple, really. Toads have dry, warty skin and hind legs shorter than their amphibian relatives. Toads also have elevated ridges (the cranial crests) in the back of, and in between their eyes, a raised area (the parotid gland) behind their eyes and slightly webbed toes. Toads are shy and usually nocturnal creatures. After eating meals consisting mostly of invertebrates, toads become quite stout and cannot jump as far as frogs - much in the same way that a couch potato cannot jump as far as an Olympic athlete.

In the tropics, however, the differences between the two are more difficult to determine. Some species could qualify either as frogs or toads. To feed themselves, toads flick their tongue forward and grasp prey with the sticky tip. In temperate regions, they hibernate in burrows. True toads spend most of their lives on land. Frogs, on the other hand, have moist, smooth skin, bulging eyes and external eardrums behind the eyes. They do not have cranial crests or visible parotid glands. Frogs have long hind legs, and most species are able to take long leaps. Many species are also equipped with webbed feet, making them excellent swimmers. Frogs can be quite vocal - especially the males. Like most of the amphibian family, frogs usually pass through a fishlike larval stage before morphing into adult frogs. The breeding season varies but often coincides with heavy spring or summer rains.

Tree Frogs (a distinct family) have digital disks - little round things on the end of their toes. Frogs live in most parts of the world, except Antarctica, the driest deserts, and many ocean islands. The greatest variety of frogs is found in moist, tropical areas. Frogs help humans in many ways by controlling insect pests in forests, farms and gardens. Frogs have also been used as food since man first managed to grab one. Neither frogs nor toads cause warts.