The Ultimate Disney Classic Animated Film Guide: 1970-1979 Content from the guide to life, the universe and everything 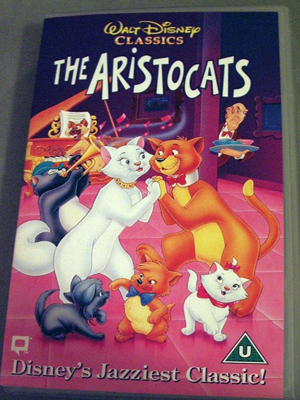 In the 1970s, the Walt Disney Animation Studios' animated films, which had enjoyed such success in the 1960s with the heights of The Jungle Book, began to decline. Walt Disney had died in 1967, and in 1970 his brother, with whom he had co-founded the company, Roy O Disney died. In the 1970s Disney wished to target the teenage audience; animation was considered to be very much the poor relation of the studio's live action films and theme parks. Of the animated films made in the 1970s, only three entirely new animated films were made, as well as one film consisting of three animated shorts packaged together and two films that combined animation and live action using the expensive process purchased for Mary Poppins.

All the films made in the 1970s were solid, if unspectacular, successes. For much of the 1970s Donn Tatum was president of the company, replaced at by the end of the decade by Walt Disney's son-in-law Ron Miller.

The inspiration for The AristoCats came in the 1960s with a proposal that the story of a wealthy Parisian widow leaving her money to her cats would be a suitable subject for a couple of episodes of the television series, Walt Disney's Wonderful World of Color. Walt Disney liked the idea so much, he gave the green-light for the story to be expanded into a feature film, before his death in 1967.

The film deliberately attempts to recapture previous films' success, with a plot very similar to that of One Hundred and One Dalmatians. As Phil Harris had been such a success in The Jungle Book , he was quickly signed up as the male lead. Similarly, as 'I Wanna Be Like You' had been a hit record, a comparable 'Ev'rybody Wants to be a Cat' was recorded, and other scenes seem inspired by Asterix and Cleopatra.

Disney wished to get back to a mediaeval theme as that had proved popular with their earlier films, notably Snow White and Cinderella, but wanted to combine it with the anthropomorphic animals that they had recently specialised in. Initially there was some indecision about whether to next adapt the stories of Robin Hood or Reynard the Fox, who regularly defeated his enemy, Isengrim the Wolf. Walt Disney had previously felt that though Reynard shared some similarities with Song of the South's hero Bre'er Rabbit, on the whole he was a sly, amoral and selfish character. Instead Robin Hood was adapted, though perhaps influenced by the French legends as Robin, like Reynard, is a fox and his enemy the Sheriff, like Isengrim, is a wolf.

Robin Hood also borrowed heavily from previous films, recasting Phil Harris, previously bear Baloo in The Jungle Book, as bear Little John. This made it easy to trace movements from the earlier film and quickly adapt them for Robin Hood; when Little John dances with Lady Cluck to 'The Phony King of England', they perform the same moves seen when Baloo dances with King Louie. The dance continues with steps traced from dancing in The Aristocats and Snow White and the Seven Dwarfs. Sir Hiss, like The Jungle Book's Kaa, likes hypnotising people and Robin Hood, like The Jungle Book, has minor characters who are elephants and vultures, leading to the re-use of sound clips. Robin Hood's hat is also identical to Peter Pan's.

This film introduces the second most popular set of Disney cartoon characters after Mickey Mouse's group2. There have been numerous spin-offs and sequels, including the 51st Disney Classic.

Walt Disney first planned to adapt some of the Winnie-the-Pooh stories after his daughters enjoyed reading them. As Winnie-the-Pooh was not a popular story in America, Disney decided to test the water by making a short film, rather than a full-length one, to see how the characters were received. At first he felt that the original cast of animals in the book, which included a bear, tiger and kangaroos, were too British(!) and that American audiences probably would not wish to see the film unless a specifically American animal was featured. Disney felt that a gopher, loosely inspired by the beaver seen in Lady and the Tramp, would work best. Initial plans involved replacing Piglet entirely with Gopher, also called Gofur, however this idea developed into a new character who frequently boasts that he is 'not in the book'. This not only is a reference to the fact that he isn't in AA Milne's original but was meant to be interpreted that Gopher is not in a phone book, despite telephones and phone books not featuring in the film.

After its success, Walt Disney began working on its sequel, but died before this was completed. The second short film introduces the successful and charismatic character of Tigger, who despite not appearing in the initial short, quickly becomes dominant. Following the completion of the third short film, the three were combined with new linking footage to make a whole film.

Disney's most successful animated film of the 1970s, The Rescuers ushered in Disney's era of rescuing rodents, having similarities with later films such as Basil the Great Mouse Detective and television series Chip 'n' Dale's Rescue Rangers. It was also the first Disney animated film to have an official sequel3.

Walt Disney had been intrigued by the story before he died, though development did not begin until after his death. An early idea considered usinging the villain Cruella de Vil from One Hundred and One Dalmatians again, although she was replaced by Madame Medusa. Similarly Penny also almost appeared in Oliver & Company, but was instead replaced by an identical character called Jenny. The plot seems rather dated, especially the emphasis placed on the fact that the mice sent to the rescue are a team made up of a woman and a working class janitor. The songs are also less prominent than in previous films, used mainly as background music.

When the film was made, an animator hid a blurry image of a topless woman in the background of two of the film's frames (more than 110,000 frames appear in the film). This was not noticed until January 1999, when the film was released on VHS and then famously recalled. All subsequent releases have removed the offending image.

Two non-classic films that combined live action and animation were made in the 1970s, attempting to recreate the runaway success of Mary Poppins.

The film was first optioned by Walt Disney when the author PL Travers was undecided over whether to sell the film rights to Mary Poppins; when she did, work on Bedknobs and Broomsticks was delayed until after that film was completed. Following Mary Poppins' success, the Disney Company tried to recreate it by hiring leading man, David Tomlinson, and the songwriting Sherman Brothers duo from the earlier film. Instead of a magical woman coming into the home of two unhappy children, three unhappy children stay at the home of a witch.

The film's rough cut was initially considered to be half an hour too long, and so to trim it to under two hours the songs 'A Step in the Right Direction', 'With a Flair', 'Nobody's Problems', 'The Fundamental Element' and 'Solid Citizen', were deleted and other songs shortened in the finished film. This angered the Sherman brothers, who would not work for the Walt Disney Company again until The Tigger Movie in 2000. An extended edition putting some of these songs back into the film has been released.

The film claims to be set on England's south coast in August 1940, which is unlikely. The three children are evacuated from London; evacuation from London to the south coast took place on 1 September, 1939. Evacuation away from the south coast, the most likely area of invasion, happened in June 1940, so the three Rawlins children appear to have been evacuated from London a year after everyone else in London and sent to what was expected to be the front line. Also, the Local Defence Volunteers were not named 'Home Guard' until 22 July 1940. Therefore the film ends with a song about 'The Old Home Guard' only a few days after 'The Old Home Guard' existed.

Pete's Dragon's plot is very similar to both Mary Poppins and The Rescuers. Just as Mary Poppins comes to the rescue of Michael and Jane, and leaves when she has helped provide a loving family for them, so Elliot leaves Pete once he has found a family. There are also many similarities between Madame Medusa and Lena Gogan, and Elliot tells Pete that he rescues children in distress, just as The Rescuers' Rescue Aid Society does. Pete runs away through a swamp just as Penny did in the film released earlier that year.

The Gogan's argument, that they own Pete as they have a bill of sale, would later be used by Lilo at the end of Lilo and Stitch (2002).

1Also known as Pooh's Grand Adventure and The Search for Christopher Robin.2Mickey Mouse's group includes Pluto, Minnie Mouse and her cat Figaro, Donald and Daisy Duck and their relatives Huey, Dewey and Louie, Scrooge McDuck and Ludwig von Drake, Goofy and Max Goof, Chip 'n' Dale, Clarabelle Cow, Horace Horsecollar, Pegleg Pete and Willie the Giant etc.3Similar-themed films with the same characters such as Saludos Amigos and The Three Caballeros do not count, being compilation pictures.4It's nice to see him, to see him nice!5According to Pete, Elliot has the head of a camel, the neck of a crocodile, the ears of a cow and is both a fish and a mammal.