The Ultimate Disney Classic Animated Film Guide: 2015-2019 Content from the guide to life, the universe and everything 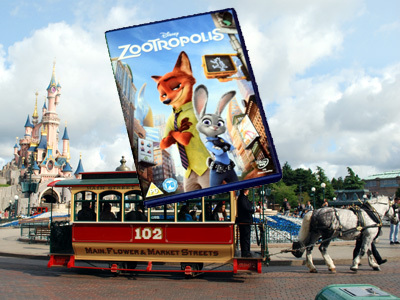 The Walt Disney Animation Studio is by far the most successful animation studio in the world. Although their story involves both dips and peaks, the five years between 2015 and 2019 was a period of consolidation at the top of their field. While they had no spectacular successes on quite the scale of Frozen (2014), they had no flops either. However half their output during this period were sequels to earlier films.

Since 2006 the Walt Disney Animation Studio's Chief Creative Officer had been John Lasseter, who is considered one of the most successful filmmakers of all time. Seven of the first ten animated films to have taken in more than $1 billion at the box office were made with his involvement. He is also credited with reversing the downward trend that had been affecting Disney's animated films in the opening years of the 21st Century. Yet this wunderkind hid a dark side that would be exposed by the end of the decade.

In the last 75 years, the Walt Disney Studio has released over 50 animated films it has labelled 'Classics'. Between 2015 and 2019 four classics were released, two in 2016 one in 2018 and one in 2019. Recurring characters and actors are shown in Bold. Also mentioned is whether these films pass the Bechdel Test. This can be summarised as whether the film involves two or more named female characters who have a conversation together that is not focussed on any male characters.

Also known as Zootopia, the film was released to a highly successful box office. Nick Wilde's design was created to resemble Robin from Disney's animated film Robin Hood (1973), which also features anthropomorphic animals. Only mammals appear in the film. One of the joys of rewatching the film is trying to spot the in-jokes, especially references to The Godfather as well as Disney films. For example, the Duke of Weaseltown was played by Alan Tudyk, who had played the Duke of Weselton in Frozen (2013). There are numerous bands and brands seen in the background for the sharp-eyed to spot, including musicians The Beagles (The Beatles), Ewe 2 (U2), Fleetwood Yak (Fleetwood Mac), Gun 'N' Rodents (Guns 'n' Roses) and Mick Jaguar (Mick Jagger) as well as Mousy's Department store, Moustercharge credit cards, and Carrot computers having a similar logo to that of Apple.

This film was produced by Ron Clements and John Musker, the team behind such Disney films such as Basil the Great Mouse Detective, The Little Mermaid, Aladdin, Hercules, Treasure Planet and The Princess and the Frog. They had hoped to adapt Terry Pratchett's Mort but were unable to secure the film rights, and so decided to make a film based on Polynesian mythology instead. They were particularly inspired by the story of demigod Maui. The film in many ways is a counterpoint to The Little Mermaid as Moana wishes to escape to the ocean as much as Ariel had hoped to learn more of the land. The film contains numerous references to the team's earlier films, especially in Tamatoa's scene. His song includes phrases 'listen to your heart' and 'a diamond in the rough' which reference Pocahontas and Aladdin, and he even has Aladdin's lamp.

Jemaine Clement, who played Tamatoa, is famous for his impressions of glam rock star David Bowie. Lin-Manuel Miranda wrote the song 'Shiny' with this in mind as a tribute to Bowie. Miranda recorded a demo of the song, which he sent to Clement as a guide to how the song should be performed. Clement said about the demo, 'you can tell that he’s doing an impression of my impression of David Bowie.'

The film is predominantly CGI, but Maui's tattoos are hand-drawn.

Moana was the fifth most successful animated film of the year, behind Pixar's Finding Dory, Disney's Zootropolis, Illumination Entertainment's The Secret Life of Pets and DreamWorks Animation's Kung Fu Panda 3.

Many of the original Disney princesses returned to play their characters, except for the actresses who had originally voiced Disney's first three princesses, two of whom (original Snow White Adriana Caselotti and Cinderella Jacqueline 'Ilene' Woods) had since passed away. Mary Costa, who originally played Aurora, had retired. Snow White was instead voiced by scriptwriter Pamela Ribon while Jennifer Hale and Kate Higgins, who played Cinderella and Aurora respectively, had previously played the characters in various Disney productions. The princesses wear t-shirts with labels that reflect their films and personalities. Other cameos include Tim Allen as Buzz Lightyear, Anthony Daniels as C-3PO, Vin Diesel as Groot, and Brad Garrett as Eeyore. Corey Burton plays Grumpy for the first time in an official Disney Classic, having voiced him in other spin-offs. Tudyk, who voices Knowsmore, had previously played King Candy in Wreck-It Ralph. In the UK, popular YouTube star Dan TDM played minor character the eBoy.

A film that lives up to the expectations of the first. There are numerous cameos, including snow models of Disney characters Dumbo the elephant and Baymax from Big Hero 6 (2014). There are also nods to Queen's 'Bohemian Rhapsody'. Jennifer Lee, the writer and director of the Frozen films, had been promoted to Head of Walt Disney Animation Studios since the first film was released. This was following the disgrace of John Lasseter. Frozen II was the most successful animated film of the year3.

Amusingly, the original trailer showed Elsa having a conversation with a female character and this led to intense speculation that it inevitably meant that Elsa was the first lesbian Disney princess. In fact she merely has a brief conversation with a minor female character, who isn't even a long-lost relative either. The film had already easily passed the Bechdel Test. Elsa's sexuality (and Honeymaren's too, come to that) remains unspecified.

Overall the film's storyline is that instead of the universe being made of Four Elements or Spirits – Earth, Wind, Fire and Water – there is additionally a fifth, central Element, which is Disney4. This pretty much sums up Disney's view of the universe.

Co-Productions and Other Animated Films

Originally an independent animation studio that made films funded by Disney, Pixar and Disney have since merged. One of the terms of the merger was that Pixar would remain an independent studio, though owned by Disney.

During this period Walt Disney Pictures pursued remaking previously animated films in live action with a vengeance. Many of these contained various degrees of computer animation, including computer-animated main characters seen in The Jungle Book and Dumbo. However, an 'animated film' is a very specific term and relates to how a film is made, not how it appears.

The Lion King remake featured only computer-generated characters. Despite this, it is still technically classed as a 'live action' film and not 'animation'. Since the controversy over whether the motion-capture film Happy Feet (2006) should be classed as an animation, and to exclude films such as Avatar (2010) from qualifying, 'animation' is defined by the Academy of Motion Picture Arts and Sciences as 'a motion picture in which movement and characters’ performances are created using a frame-by-frame technique, a significant number of the major characters are animated, and animation figures in no less than 75 percent of the running time'. The Lion King was made by filming characters against a bluescreen rather than by utilising a frame-by-frame technique and so, though the characters are computer-generated, the film is classed as live action and not animation.

By the end of the decade the Walt Disney Animation Studio's position was looking almost unassailable, with the Walt Disney Company dominating the market. Following the purchase of 20th Century Fox in 2019, they own three of the world's leading animation studios (Walt Disney Animation Studios, Pixar and Blue Sky). They are also blurring even more the traditional boundaries between live action and animation. Even though they had closed a fourth studio, DisneyToon Studios, their position as market leaders looks set to continue. However, they have endured a major internal shakeup.

In 2017, the denouncement of Harvey Weinstein as a sexual predator led to the #MeToo movement, encouraging women to expose other offenders. Later in the year, John Lasseter admitted sexual misconduct5. This resulted in an initial six month leave-of-absence but was followed by his leaving the Walt Disney Company at the end of 2018. Frozen 2 was the last film to be made with his close involvement. Would his leaving have as grave an impact on the Walt Disney Animation Studio's fortunes as Jeffrey Katzenberg's had back in 1994?

1Following The Rescuers (1977) / The Rescuers Down Under (1990), Fantasia (1940) / Fantasia 2000 (2000) and The Many Adventures of Winnie-the-Pooh (1977) / Winnie-the-Pooh (2001).2DisneyToon Studios made several sequels to Disney Classics while Pixar have made sequels to earlier Pixar films.3Excluding the more successful live-action remake of The Lion King.4Or, more specifically, Disney Princesses.5Lasseter admitted he had on numerous occasions grabbed, kissed and made inappropriate comments regarding female members of staff, often, but not always, following the consumption of alcohol.