'Bohemian Rhapsody' - The Song Content from the guide to life, the universe and everything 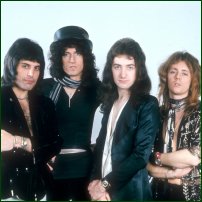 From the 1975  Queen album A Night at the Opera1, named after the Marx Brothers' movie of the same name, 'Bohemian Rhapsody', sometimes referred to as 'Bo Rhap', was composed by Freddie Mercury on his upright piano, and went on to become one of the most expensive and complex recordings of a pop song, or indeed any song, in music history.

What's the song about? Well, that seems to be shrouded in mystery. Freddie Mercury claimed that even he didn't know. It certainly doesn't have anything to do with Bohemia - but in addition to 'Bohemian' meaning a person from that country - it also refers to a person who has an unconventional character and little regard for standards. A 'rhapsody' is a style of classical music, or an enthusiastic expression of feeling.

The song is close to six minutes in length. At the time this was quite lengthy for a pop song, and this caused some doubt about whether the song would be a success. When the band had finally recorded it, over a period of three weeks, Mercury gave a copy of the song to radio disc jockey Kenny Everett as a personal gift, telling him not to play it on air. This was reverse psychology, and, of course, Everett did air the song. At first he played small samples of it, but then went on to playing the song as many as 14 times during his slot. When it was released, the song went to Number One in the UK charts, and in 1977 it won the accolade 'best single in the last 25 years'. It topped the charts again in 1991 when it was reissued after Mercury's death.

A promotional video was made for the song which is sometimes, incorrectly, credited as the first-ever music video. The main purpose for the video was so it could be shown on Top of the Pops instead of the band having to perform the song live, which was more difficult to arrange.

Over the years, the song has been covered by many other artists including the Royal Philharmonic Orchestra, Rolf Harris and even 'Weird Al' Yankovic, who did a polka version of the song called 'Bohemian Polka'. 'Bohemian Rhapsody' has been played by the mock-heavy metal band Bad News, who did a terrible job of it. At his comedy shows, Lee Evans acts out the lyrics while the song is playing.

In the 1990s the promotional video was spoofed for the Comic Relief charity. This version featured many celebrities including Hugh Laurie, Stephen Fry, Dawn French and Sir Patrick Moore singing along and/or playing air guitar to the original song. The BBC Breakfast presenters also did 'Bo Rhap' for the Children in Need charity in 2005.

In the 1992 movie Wayne's World, a Saturday Night Live spin-off starring Mike Meyers and Dana Carvey, there is a scene in which Wayne, Garth and friends are in their Mirthmobile lip-synching to the song playing on a cassette tape.

Glossary of Words From the Opera Section

1In addition to being released as a single with 'I'm In Love With My Car' as the B-side.2This part is sung entirely by Mercury, his voice being multitracked.3For full enjoyment of this part, you must head-bang. This is violently flinging your head around to the rhythm. This works even better if you have long hair.