The Ultimate DreamWorks Animated Film Guide: 2010-2014 Content from the guide to life, the universe and everything 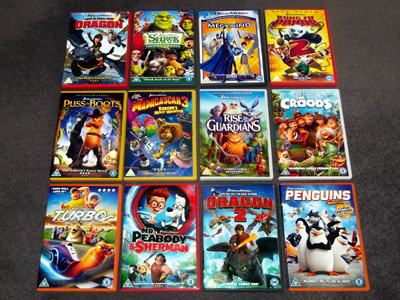 Between 1998 and 2004, DreamWorks Animation had experienced both failure and success, with one of its films being such a box office disaster1 that the studio had been completely separated from its parent, DreamWorks SKG. Since then, the studio had regained its confidence and embarked on a revolutionary strategy.

Their strategy was simple. Financially successful films would have sequels made, which would be released roughly alternating with entirely new films. In 2010 DreamWorks Animation became the first studio to release three computer animated films in a single year. It was part of their plan to make five computer animated films every two years. This raised the question over whether the increase in quantity of films released adversely affected the quality of the films that they were creating.

Below are listed DreamWorks Animations' films made during this period. Characters and actors in Bold appear in other, related films.

The dragon Toothless was inspired by a cross between a salamander and a cat, while the shape of his face was loosely based on the face of Stitch from Lilo & Stitch (2002), a Disney film that had also been directed by Chris Sanders and Dean DeBlois.

This was the fifth most successful animated film of a very competitive year, after Pixar's Toy Story 3, Shrek Forever After, Disney's Tangled and Illumination Entertainment's Despicable Me.

After the disappointing Shrek the Third comes a much stronger film, even if it doesn't reach the heights of the first two films in the series.

A fun film that strongly spoofs Superman and other superhero films, complete with the exploding home planet, Marlon Brando 'space dad' impersonation and a cast of characters with alliterative names to name but three. One of the joys of the film is spotting the in-jokes.

The film was a minor box office success and received positive reviews from critics in a very competitive year for animation; it was beaten at the box office by Pixar's Toy Story 3, Shrek Forever After, Disney's Tangled, Illumination Entertainment's Despicable Me and How to Train Your Dragon.

Despicable Me was a particular rival as it too dealt with a villain-turning-good plot, aided by Minion(s). After this film's disappointing box office, Jeffrey Katzenberg announced that DreamWorks Animation would not make any more film genre parodies, as Shark Tale, Monsters vs Aliens and Megamind had all had disappointing box offices, particularly in international markets.

An animated film that actually sensitively portrays Chinese culture and addresses the unanswered question from Kung Fu Panda; why is Po's father a goose? It also is confident that a sequel will be commissioned, having an open ending. As well as enjoyable action the film shows Po's emotional journey, giving all the characters from the first film a role to play.

A prequel spin-off of the Shrek series, set in a fairy tale land that resembles Spain and Mexico.

Although less of an ensemble than the Shrek films, this is still highly enjoyable, and was the third most successful animated film of the year after Kung Fu Panda 2 and Cars 2.

None of this film is actually set in Madagascar. In the second film in the series, Alex was reunited with his father Zuba. However, as Bernie Mac died before the Madagascar: Escape 2 Africa was released, the plot of the second film is ignored.

Rise of the Guardians is a highly imaginative film that takes traditional mythological characters and turns them on their head, so that the Easter Bunny is Australian. While the Guardians all have tasks that keep them busy, Jack Frost is carefree and able to point out that the Guardians are so busy bringing joy to children, they don't actually make time for children. Though Father Christmas is not normally portrayed as a sword-wielding, tattooed Russian whose toys are made by Yetis, this actually works really well.

Sadly, the film flopped. It was beaten at the box office by Blue Sky's Ice Age: Continental Drift, Madagascar 3: Europe's Most Wanted, Pixar's Brave, Disney's Wreck-It Ralph, Sony Pictures Animation's Hotel Tranyslvania and Illumination Entertainment's Dr Seuss' The Lorax. It was the company's first failure since Sinbad: Legend of the Seven Seas (2003). As a result of this, DreamWorks Animation underwent a restructure in early 2013 and over 300 people lost their jobs.

Following the flop of Rise of the Guardians, DreamWorks Animation were in financial trouble and needed to release a success. This film had originally been proposed as a co-production with Aardman Animation back in 2005 as part of their partnership agreement with DreamWorks SKG, written by John Cleese who had been inspired by Roald Dahl's The Twits, but after DreamWorks Animation and Aardman parted company, the film rights were retained by DreamWorks.

On release this was DreamWorks Animation's second most successful film after Kung Fu Panda, but as 2013 was a particularly competitive year for animation it was the fourth most successful animated film of the year, after Frozen, Despicable Me 2 and Monsters University. A sequel is expected with a provisional release date of 2017.

This film was made with a lot of input from the Indianapolis Motor Speedway in order to make it seem as authentic as possible.

Conceived as 'Fast & Furious with Snails', the film was released at the same time as Despicable Me 2. It completely flopped in America, although it did reasonably in the rest of the world. Overall, the film lost approximately $15 million and was beaten at the box office by Frozen, Despicable Me 2, Monsters University and The Croods.

This was the first film adaptation made as part of the DreamWorks Classics media library. Though an enjoyable romp through time and space that sadly underperformed at the box office, possibly because the characters of Mr Peabody & Sherman were unfamiliar to modern audiences. Mr Peabody had been created for a cartoon series from the late 1950s, appearing as a supporting part of The Rocky and Bullwinkle Show - watched by the intended audience's grandparents.

The Adventures of Rocky and Bullwinkle, produced by Universal Pictures, had previously flopped in 2000. Mr Peabody & Sherman was beaten at the box office by Disney's Big Hero 6, How to Train Your Dragon 2, Blue Sky's Rio 2, Warner Brothers' The LEGO Movie and Penguins of Madagascar.

Very much intended to be the dark, middle chapter of a trilogy, unlike other sequels this has emotional impact and the characters have visibly aged.

The second most successful animated film of the year behind Disney's Big Hero 6. It was also the first DreamWorks Animation film to benefit from more advanced animation tools.

This film was full of joking references to famous names presumably aimed at an adult audience, however most of the film had a very slapstick, child-orientated plot. The character of Dr Brine, played by John Malkovich, is introduced with a sequence in which he walks on his hands; this was inspired by a similar sequence when Malkovich played Humma Kavula in The Hitchhiker's Guide to the Galaxy (2005). Danny Jacobs replaces Sacha Baron Cohen as King Julien and Rico has again been recast.

Sadly the film was a big box office disappointment which meant that the studio lost over $50 million during 2014.

The Ultimate DreamWorks Animated Film Guide
1998-2004 | 2005-2009 | 2010-2014
1Sinbad: Legend of the Seven Seas (2003) failed at the box office and lost approximately $125million.2The animation company behind Star Trek: The Animated Series, The New Adventures of Flash Gordon and He-Man and the Masters of the Universe etc.3United Productions of America, most famous for Mr Magoo and Gerald McBoing Boing.4The American equivalent of Formula 1, only the simple course is a circle.