AC/DC - the Band Content from the guide to life, the universe and everything 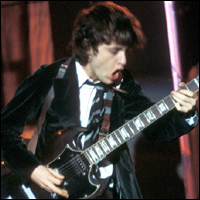 Hey Satan, paid my dues
Playing in a rocking band
Hey Momma, look at me
I'm on my way to the promised land
- 'Highway to Hell'

AC/DC first came into being in 1973, when Australian1  guitarist Malcolm Young's previous band, The Velvet Underground2, had gone their separate ways. Needing a lead guitarist, he recruited younger brother Angus, and the two Youngs were joined by vocalist Dave Evans. In true rock band style, they went through a succession of drummers and bassists in the early years, before settling on Phil Rudd and Mike Evans.

It was at their first gigs, at which they played covers of Rolling Stones, Beatles and Chuck Berry numbers, that Angus developed many of the antics that were later to guarantee him full guitar hero status: his characteristic head-jerks; the Chuck Berry duck-walk; his habit of shedding some or all of his clothing and, most importantly, his school uniform3. Anything, as Angus has claimed, to distract their early audiences from their beer and make them pay attention to the band and their music. In the early days, the band were often billed as a 'glam rock' group, and would use costumes such as gold lamé suits and motorcycle helmets for effect, while Angus has been known to wear several different costumes, including a Superman-style outfit. This glam image, combined with the sexual connotations of the name AC/DC4, often led to audiences assuming that the group were openly homosexual.

The first major change to the line-up came in 1974, when singer Dave Evans refused to go on stage. He was replaced by the band's driver, Ronald 'Bon' Scott5. With a record contract secured by another member of the Young family, older brother George6, the band's first two albums - High Voltage (1974) and TNT (1975) - were originally released only in Australia. A year later, however, they were combined to form their first international release, also called High Voltage (1976), which was accompanied by tours of the USA and UK.

After the release of Dirty Deeds Done Dirt Cheap (1976), bassist Evans left the band and was replaced by Cliff Williams, completing the first 'definitive' AC/DC line-up. The album sales got bigger and bigger, and the band finally made it onto the US album charts with Let There Be Rock (1977), followed by Powerage (1978). Even greater success accompanied the release of Highway to Hell (1979), the band's first million-selling album.

Forget the hearse 'cos I'll never die
I got nine lives, cat's eyes
Abusin' every one of them and running wild
- 'Back in Black'

With the band poised for bigger and better things, their rise was halted by the sudden death of Bon Scott. In February, 1980, Scott was discovered dead in his car, having drunk himself into unconsciousness and choked on his own vomit.

After making the difficult decision to continue, the remaining band members began searching for a replacement, finding one in the form of Brian Johnson, lead singer with Newcastle-upon-Tyne-based band 'Geordie'. Having created the second 'definitive' line-up, Young, Young, Johnson, Williams and Rudd had completed, recorded and released their next album by August that year. Back in Black became a fitting tribute to Bon Scott, with US sales of 21 million (giving it 21-times platinum or 'double diamond' status) and estimated worldwide sales of over 40 million, making it the best selling heavy metal album of all time. Realising that the band most definitely had a post-Bon Scott future, they began touring once more, and also returned to the studio to produce For Those About to Rock (1981).

Throughout the 1980s, AC/DC continued to enhance their reputation as one of the world's greatest live bands. In the studio, however, they were stuggling to repeat the successes of Back in Black and For Those About to Rock. Drummer Rudd left the band in 1982 to be replaced by Simon Wright, who was himself replaced by Chris Slade in 1989. With the Young brothers taking on production duties, the next two albums - Flick of the Switch (1983) and Fly on the Wall (1985)7 - were less well received, and many concluded that the band had entered the last years of its existence.

The band, however, had other ideas. They were asked by Stephen King to record the soundtrack to his film Maximum Overdrive and the resulting album - Who Made Who (1986), a compliation of previous work and two new tracks - saw AC/DC back in the charts8.

Further improvement in their status came with Razor's Edge (1990), which reached number two on the US album charts and gave the band a top 20 hit in the UK with 'Thunderstruck'. AC/DC continued into the 1990s with the concert album Live (1992), and also contributed the song 'Big Gun' to the soundtrack of the Arnold Schwarzenegger film Last Action Hero. In 1994, drummer Phil Rudd returned to the band and they recorded Ballbreaker (1995), which sold one million copies within six months and was certified platinum before the year was out.

AC/DC ended the 20th Century with their 17th studio album - Stiff Upper Lip (2000) - which was again certified platinum within one year of its release. In 2008, the band released Black Ice and embarked on another gruelling world tour.

1Although Malcolm and his brothers were actually born in Scotland before his family emigrated to Australia in the 1960s.2Strictly an Australian outfit; nothing to do with Lou Reed et al.3Contrary to popular rumour, Angus was not still at school when the band was formed, but clearly had his old cap and shorts lying around.4Of which the Young brothers were ignorant, claiming they took the name from the back of a vacuum cleaner.5Who, like the Young brothers, was also a Scottish-born Australian.6Who had been a member of successful Australian band The Easybeats and acted as the band's initial producer, gaining them access to better recording facilities than would normally be available to an up-and-coming band.7The album Fly on the Wall was cited by the serial killer Richard Ramirez as the inspiration for his crimes.8The film itself, however, was widely panned.