Giant Pandas Content from the guide to life, the universe and everything 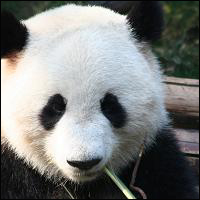 Few animals have captured public opinion as totally or as rapidly as giant pandas. Although they have been known to the Chinese for at least two thousand years - one of the Han Emperors kept one as a pet - they were unknown to the western world until their 'discovery' in 1869 by the French missionary Pere Armand David. Pandas have since become emblematic of China, to the extent that loans to zoos were used as a diplomatic tool by the Chinese state, particularly during the 1970s1.

The giant panda was also adopted as the logo of the WWF (previously the World Wildlife Fund) and has consequently come to be - along with the whale - the quintessential endangered animal. Pandas remain rare in the wild, but breeding programmes have improved so that they are now quite common in zoos.

99% of a panda's diet is bamboo, with the remainder being made up of assorted plants, insects and other small animals. Their digestive systems are incapable of extracting much nutrition from bamboo, and therefore pandas require huge amounts of it, spending up to 18 hours a day eating. Consequently, they have an exceptionally sedentary lifestyle.

This reliance on bamboo makes pandas very vulnerable to environmental change. They were once wide-ranging within China and south-east Asia, but human farming techniques mean that the bamboo they rely on is now restricted to more mountainous areas. Today, pandas are found only in a small arc of broadleaf and coniferous forests in Sichuan, Shaanxi, and Gansu provinces2, China, where a network of protected national parks has been set up to preserve them.

There were believed to be as few as 1,500 pandas in the wild, although recent genetic studies on panda droppings have doubled this number to around 3,000 individuals. There are only six known sites where pandas live in the wild. In addition, around 185 pandas live in captivity, the majority in China. By far the largest panda breeding centres are at Wolong and Chengdu.

Pandas have a reputation for being notoriously shy about breeding in captivity. They become sexually mature at about four to eight years of age, and remain fertile until around 20. Females ovulate once a year, meaning they are only sexually receptive for two to four days a year. It is common for females to attack the males after mating. They give birth 95 to 160 days after intercourse (the variation being caused by the length of time the egg takes to implant).

Panda newborns are the smallest among placental mammals in relation to parent size.

Pandas are generally born in pairs, or sometimes individually; in cases of twins, it is rare for both to survive, and one is often abandoned.

Only recently has it been discovered that pandas have any society to speak of at all. They are now known to form loose groups that share a territory, but meet only rarely.

The bones in a panda's paw are laid out in the same way as in all mammals, with five digits. As with all bears, their five digits are of similar sizes and all flex in the same direction, making it very difficult to grip with them. In order to effectively strip bamboo cane, pandas need to be able to grasp. In primates, this is achieved by having a 'thumb' - a digit that bends in the opposite direction to the other four. Pandas, however, have found an alternative method.

Uniquely, pandas (both red pandas and giant pandas) have six fingers. The 'extra' digit is a highly modified radial sesamoid bone - a tiny bone in the wrist of most mammals. Although this is not as flexible as a 'true thumb', it allows pandas sufficient manual dexterity to manipulate the canes.

It is noteworthy that giant pandas are officially classed as Carnivores (order: carnivora), despite being herbivores by nature. Their descent from meat-eating ancestors is reflected in their digestive system, which is highly inefficient at breaking down cellulose and extracting nutrition from plant material, as well as their teeth and claws.

For anatomical reasons such as this, pandas were initially classified as bears (Ursidae), but there was for a long time controversy over whether they might more properly belong in the rodent group (Procyonidae). The reason for this is that they appear to share their unusual thumb with red pandas (Ailurus fulgens), which are very rodent-like. If red pandas are rodents, and giant pandas are closely related to red pandas, then giant pandas must be rodents also.

During the mid-1980s, studies of panda chromosomes showed an affinity to bears, but some studies of their haemoglobin did not bear (sorry) this out. Further genetic and other molecular analysis have resolved this, and the giant panda is classified as part of the bear family and only distantly related to the red panda, which is a rodent.

Further support for the 'bear hypothesis' has been derived from fossil evidence. The oldest species of fossil panda is Ailuropoda lufengensis, from around 8,000,000 years ago. Pandas remained small for the next 5,000,000 years. Fossil pandas reached one metre long 600,000 years ago, and a much larger species is also known. These fossils are widespread throughout the Chinese lowlands, and even into modern Burma and Taiwan.

More recently, the discovery of the fossil red panda ancestor Simocyon batalleri shows a transitional form of the 'other panda's thumb'. This makes it even more notable that both giant pandas and red pandas have the same 'thumb'. There are also differences in the musculature between the two. There is no longer any doubt that this is one of the most striking cases of convergent evolution we know of.

1This led to fame for some pandas such as Chi-Chi, who was donated to London Zoo in 1961 and became inspirational to the selection of the WWF logo. 2That's sort of slightly right of centre, if your Chinese geography isn't up to much.