The Ultimate DreamWorks Animated Film Guide: 2005-2009 Content from the guide to life, the universe and everything 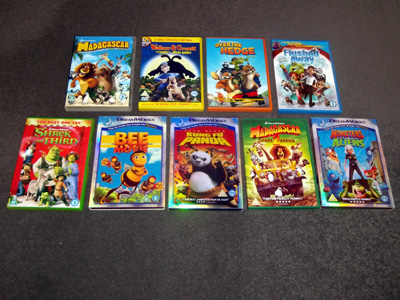 In the mid-1990s Steven Spielberg, Jeffrey Katzenberg and David Geffen formed a new major Hollywood studio. Known as DreamWorks SKG, this was created to make both live-action and animated films. After their animated film Sinbad: Legend of the Seven Seas (2003) failed at the box office and lost around $125 million, DreamWorks' animation division was split off from the DreamWorks live-action studio to form a separate company, DreamWorks Animation SKG, with the new company put on the stock market to raise further funds.

Sinbad: Legend of the Seven Seas was also the last traditional cel-animated film that DreamWorks Animation made; they would now concentrate on computer animation, known as CGI. However DreamWorks had signed a deal with Aardman Animation, agreeing to finance and distribute five feature-length films made by the highly regarded British studio. The first of these, Chicken Run, had been released to huge success in 2000. Aardman specialised in stop-motion animation and were keen to branch into computer animation also.

Below are listed the DreamWorks Animation films made during this period. Characters and actors whose names appear in Bold return in other, related films.

Madagascar was the first film in DreamWorks Animation's second successful film franchise, following Shrek. The story of four zoo animals and the rather bizarre creatures they encounter has led to three sequels to date and two spin-off television series. Like the Shrek series, it can be enjoyed both by children (who will enjoy the story of animals and sing along to 'I Like To Move It, Move It') and adults (who will pick up on other references).

DreamWorks Animation had been accused of copying Disney and Pixar films, ever since they rush-released Antz (1998) shortly before Pixar had made A Bug's Life (1998). Other potential examples of copying include A Shark's Tale (2004), supposedly based on Pixar's Finding Nemo (2003). Yet for Madagascar, it may have been DreamWorks Animation that were copied when the following year Disney distributed a film by Canadian television and special effects company C.O.R.E. This film, The Wild (2006), was about a lion and giraffe in New York Zoo escaping into the wild.

A co-production with Aardman Animations.

In early 2006, Paramount purchased DreamWorks SKG, the parent company that had overseen the distribution of DreamWorks Animation's films. DreamWorks Animation remained independent, but signed a deal allowing Paramount to distribute their films. Over The Hedge was the first film to be distributed under the new agreement. Sadly it was only a very minor success at the box office and so all plans to make a proposed sequel were dropped.

A co-production with Aardman Animations.

Flushed Away was Aardman's first computer animated film; they had adapted to CGI because of the difficulties involved in using water in stop-motion. Relations between DreamWorks and Aardman really soured during the making of this film, as Aardman had wanted to make a film about pirate rats, but DreamWorks proclaimed that any film featuring pirates would flop, plus when the film was finished DreamWorks felt that Flushed Away was too British. It was agreed by mutual consent that DreamWorks Animation would not continue co-producing films with Aardman. The film rights for an idea by John Cleese that Aardman were working on developing with DreamWorks Animation at the time, to be called Crood Awakening, were kept with DreamWorks.

Like onions and ogres, a good Shrek film should have layers. Sadly, after the excellent first two Shrek films, Shrek The Third feels less than the sum of its parts. The plot involves Harold dying and naming Shrek and Fiona as his heirs. Rather than allow Fiona, King Harold's own daughter, the chance to decide whether she wants to become queen, and even though Harold's wife Lillian is still Far, Far Away's queen, plus the kingdom is cluttered with genuine princesses including Snow White, Sleeping Beauty, Cinderella and even Rapunzel, Shrek instead decides to make someone he's never met the next king. As Prince Charming proclaims himself king, attempting to usurp the throne, only to be replaced by King Arthur, the film's old-fashioned message seems to be that only men can rule.

There's no doubt that the film is weaker than previous films, mainly because the two new characters, Merlin and Arthur, are very weak and do not actually do a lot. Where previous films in the series had twisted Disney stereotypes, Shrek the Third insists on portraying these two as exactly the same characters they had been in The Sword in the Stone: a forgetful teacher with a beard and a young, clumsy boy who is picked on by older and stronger lads.

There is a very minor character called Rumpelstiltskin; a completely different Rumpelstiltskin would play a much larger role in Shrek Forever After1. Sadly, Doris the ugly stepsister is only voiced by Larry King, and not by Jonathan Ross, who had voiced her in the UK version of Shrek 2. The plot, in which Shrek and Donkey visit a High School, does not quite evoke the same sense of adventure as their first quest together when they rescued Princess Fiona from a dragon-guarded tower built on a lake of lava.

The film had a lot to live up to and does not quite make it. Despite this, there are good lines and enjoyable moments. It also remains one of DreamWorks Animation's most successful films.

A moderate box office success, but still one of DreamWorks Animation's least profitable films. As well as a cast involving many of the actors in Seinfeld's show Seinfeld, the film features cameos from Vincent from Over the Hedge and even Winnie-the-Pooh and Piglet. It is also the second DreamWorks animated film in a row to feature Larry King.

Kung Fu Panda is the most successful non-Shrek DreamWorks Animation film to date, and it easily beat Disney's Bolt (2008) at the box office. More than just a kick-flick, at heart it is the story of a nobody who becomes a hero by believing in himself and being himself. The film also looks at the importance of role models and idols.

The quality of the animation is so impressive, it became the first DreamWorks Animation film to be released on IMAX screens. The film also begins with a stunning, stylised animation sequence that reflects Japanese anime. The opening DreamWorks logo sequence also references Chinese shadow puppets. This, and the time and effort of ensuring that the small details of Chinese culture were correct ensured that this film received unprecedented success in China.

A confident film, by having the central character a panda while his father is a goose it practically announces the intention to resolve unanswered questions with a sequel. As it was so successful, it became the first film in DreamWorks Animation's third film franchise when Kung Fu Panda 2 was released just three years later.

This entertaining film seems like a cross between Madagascar and The Lion King. Alex the lion is like Simba, rediscovering his father who is the current lion king, while Scar-like Makunga wishes to take the throne for himself. The film perhaps has more for adults to enjoy than the original did, as it includes references to diverse sources like The Twilight Zone and Joe Versus the Volcano.

Early trailers for the film, including ones found on other DreamWorks Animation DVDs, had it entitled Madagascar: The Crate Escape even though only Alex is seen in a crate in this film.

The film is a delightful homage to 1950s era B-movies, with a few nods to more recent films such as ET The Extra-Terrestrial and Close Encounters of the Third Kind. The titular monsters were inspired by classics of the genre; Attack of the 50 Foot Woman (1958) for Ginormica, The Blob (1958) inspiring B.O.B., Dr Cockroach was inspired by The Fly (1958), Mothra (1961) was the basis for Insectosaurus and the character of the Missing Link owes a large debt to Creature from the Black Lagoon (1954). One of the joys of watching this film is looking out for the homages to previous films, including Dr Strangelove; or How I Learned to Stop Worrying and Love the Bomb and Beverly Hills Cop.

Appropriately for a film tribute to 1950s B-movies, many of which were shown in 3D, this was the first DreamWorks Animation film created to be in stereoscopic 3D from the start rather than being converted to 3D later. This did, however, add approximately $15 million to the film's cost.

The Ultimate DreamWorks Animated Film Guide
1998-2004 | 2005-2009 | 2010-2014
1Presumably they are cousins or other distant relations who share the same surname.2Bernie Mac died before the film was released.3Composer Mancini is credited as this version of 'Planet Claire' included a sample from Mancini's Peter Gunn theme.