Giraffes Content from the guide to life, the universe and everything 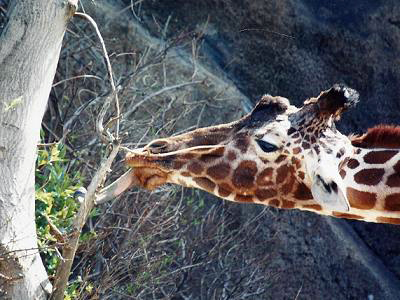 That gentle giant, the giraffe, certainly counts among the most unusual members of the mammal class. Their long necks are unrivalled, and they are officially the tallest animals on earth. They are quiet and inquisitive, delicate in appearance despite their great size, and today still count among the most popular animals in zoos and wildlife parks.

The giraffe's scientific name is Giraffa camelopardalis. The first part of the name (from which its English name derives) comes from the Arabic word zirapha which means 'one who walks swiftly'. The second part is Greek. Camelo means 'camel' and pardalis means 'like a leopard'. The complete scientific name can therefore be translated as 'leopard-like camel that walks swiftly'. It encapsulates a number of the giraffe's distinctive qualities; like a camel, it has long legs and a long neck; its body is covered with dark blotches like the coat of a spotted cat; it does indeed walk rapidly.

A big bull giraffe can be up to 20ft tall and weigh over 3,000lbs; on average they stand between 13 and 18ft, while the cows are between 12 and 16ft. The head is rather small compared to the body. The giraffe's long neck forms a hump over the shoulders where the strong muscles are anchored. Its body is short and deep and slopes downward from the shoulders to the rump. It has a tail with a tuft of long black wiry hairs at the tip. Its skin is covered with a patchwork pattern of dark spots on a lighter background. Every individual has a different pattern and there are also general differences between different subspecies. The bulls are often darker coloured than the cows and darken even more as they grow older until their spotting is almost pitch-black on a dirty brown background.

On its head, the giraffe carries short horns called ossicones. These contain bony cores covered with a hairy layer of skin; they are similar to the first stages of the development of a deer's antlers. Modern giraffes have up to five horns. They are most prominently developed in old bulls. There is a prominent bump on the forehead, followed by a pair of well-developed horns over the eyes and a low pair of knobby horns behind the ears. In females and young giraffes it is usually only the main pair of horns that is visible.

The giraffe is classified in the Giraffidae, which currently contains only two members: the familiar long-necked savannah giraffe and the rare short-necked forest-dwelling Okapi. In the past the family was more widely distributed, reaching Asia, and included a greater variety of forms, including giant, heavy-bodied ox-like types that had spreading antlers. Today the giraffe family is restricted to Africa.

The walking gait of the giraffe resembles that of a camel. On each side of the body, the fore and hindlegs travel forwards or backwards together. While the left fore- and hindlegs move forward, the right fore- and hindlegs move backward. The reason for this gait is that its legs are very long compared to its body. If the legs on each side were not synchronised, the front and the back hoof of the legs on that side would knock into each other on every step. But thanks to its special walk it can take long steps and move quite fast. When it has to move quickly it goes into a gallop and moves its rear legs forward and backward together, keeping them to the outside of the front feet. It can reach speeds of up to 35 miles per hour. 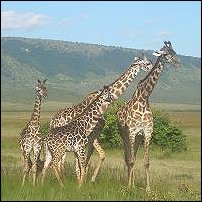 Giraffes usually have fairly fixed home ranges, ranging from eight to 50 square miles, but the ranges of different individuals overlap and they often assemble in herds of four to 30 animals. These herds form and disband easily. Old bulls are often solitary. The bulls establish a hierarchic order among themselves to determine who gets the mating privileges.

The growth of horn increases the mass and weight of the bull giraffe's head. It uses this as a club in ritual fights to establish who ranks highest in the giraffe hierarchy. This ritual is called necking and proceeds like this; two contenders stand side by side, facing in the same direction, and use their necks to swing their heads at each other. Sometimes one knocks the other off balance or even unconscious, but usually the weaker one backs down before the fight goes that far.

It has been said that giraffes are mute, but this is not the case. They produce a wide range of audible sounds, including bleats, grunts, whistles and lowing noises. Still, they remain silent most of the time.

The giraffe is a herbivore and uses its great height to browse on leaves and twigs that other animals cannot reach. Its gums and lips are very tough, and it is not deterred by the thorny defences of acacia trees. It has a 15 - 21 inch prehensile tongue that extends its effective reach even more. Though mainly a browser, it sometimes eats grass or licks at salt deposits. A giraffe can go for over a month without drinking as it gets most of its moisture from leaves. The giraffe has difficulty lowering its head down to ground level because the hinge of its neck is situated far towards the rear, somewhat restricting its downwards movement. To bend down, the giraffe spreads its front feet far apart and bends its forelegs while straightening out its hindlegs to help it get its head down low enough. Special valves in its neck prevent the blood from flowing down to its brain when it drops its head, or from flowing away from its brain when it raises its head after drinking. If this was not the case it would pass out.

The gestation period of the giraffe is about 450 days, after which period it gives birth to a single calf. She gives birth standing up and the calf, which weighs about 150lbs, suffers quite a shock from the six-foot fall to the ground. If the newborn survives this it can usually stand up and walk around within an hour.

Lions regularly capture and kill giraffe calves. It even happens on occasion that a pride of lions working together manage to bring down an adult cow or bull. The giraffe can defend itself very adequately by kicking with its front or hind legs. The hoof of a giraffe can be over eight inches in length. Its kick is so fast and forceful that, if it connects at all, it is sure to instantly shatter the skull, ribcage, spine or limb of the attacker. But lions are very ingenious in dealing with giraffes. A number of lionesses will harass it, trying to imbalance it. If it falls, it is finished and the lions have a feast.

Like just about every large mammal species, the giraffe is under threat from humans. While they were heavily hunted for their skins, giraffes are now protected. The biggest danger they face is the disappearance of their habitat. As human populations grow and develop, more and more land is needed for livestock or agriculture and less and less is available for the indigenous wild animals. But the ecological needs of giraffes are not exorbitant and wildlife conservation is a matter of priority in many African countries. As long as large patches of giraffe-country remain under conservation, there is hope for their future.