Lemurs Content from the guide to life, the universe and everything 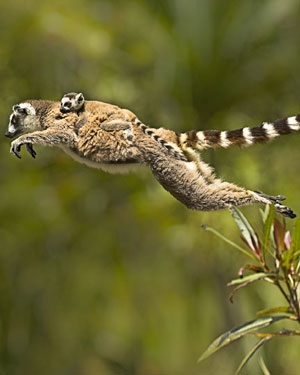 Lemurs have a bizarre appearance that has provoked different reactions in humans, from 'Let's kill them because they are bad omens'; to 'Awww... how cute!'. A lemur's body is similar to a small monkey, but its face is longer (more like a rodent or dog). Their eyes tend to seem large for the size of their head making them a look as if they are staring.

The name of the animal comes from the Latin word lemures, which means 'spirits of the dead', inspired by the creature's nocturnal behaviour and pale ghostly faces.

Lemurs are prosimians ('before Simians'). Prosimi is a Suborder of the Order Primate. Humans also belong to the Order Primate, but are in the Suborder Anthropoidea and Superfamily Hominoidea. That means all Prosimi share the first four taxonomic classifications (Kingdom, Phylum, Class, and Order) with humans. Some people call all Prosimi 'lemurs' but actually there are many Suborders and Superfamilies of Prosimi each with their own common name. Lemurs are classified as Suborder Strepsirhini and Superfamily Lemuroidea (there are five Families, 14 Genera, and about 55 Species of currently living lemur).

Madagascar has the only natural population of lemurs in the world. However, the second largest lemur population is at Duke University's Primate Center where you can find more information on taxonomy and specific species than you ever thought possible.

What Do Lemurs Do?

Some lemurs stay in trees, and some live on the ground. As a matter of fact, despite being less developed, lemurs fill just about every niche that a primate can. It is speculated that evolution of primates stopped on Madagascar, while it continued elsewhere, because there are no 'great' predators (only nine species of carnivore in total) and therefore less competition.

Lemurs eat mostly fruit and leaves, but a few species eat some insects.

Within most species, male and female lemurs have similar markings. Gestation of 30-150 days (depending on the species) will bring, typically, two new lemurs into the world.

17 species of lemur are endangered, including the Black Lemur1, the Aye-Aye (Daubentonia madagascariensis), and the Hairy-Eared Dwarf Lemur (Allocebus trichotis). Really, that's what they are called.