Red Panda Content from the guide to life, the universe and everything 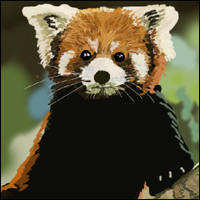 The Ailurus Fulgens, also known as the red panda, lesser panda, hun-ho (Chinese for 'fire fox'), and wah, lives in the Himalayan Mountains between 2,000 and 4,800 feet where it is cool and moist. The red panda is slightly larger than a house cat (with a head and body length of 50-64cm and a weight of 3-6kg), and is a rusty red colour with a long striped tail, a short, wide nose, and dark tear tracks. Red pandas may live up to 17 years in captivity, but usually only last between eight and ten. Very little is known about their preferences, and there is even a debate as to whether they are more closely related to pandas, raccoons, or are in a family of their own. Even so, red pandas are very interesting creatures.

We are not even entirely certain what red pandas eat. Though they have the digestive system of a carnivore, their staple food is bamboo. They eat only the leaves and the tender shoots, so it is easier to digest. Red pandas also eat grasses, roots, acorns, berries, lichen, mushrooms, fruit, and blossoms. In the zoos, they eat mulberries almost exclusively when in season. To supplement their herbivore diet, they also eat the occasional insect, bird eggs, bird nestlings, and mice. Because bamboo is not a very good energy source, red pandas have to eat almost 30% of their body weight daily and do not waste much energy searching for food.

Red pandas have a specialised wrist bone, called the 'radial sesamoid', which they use to grasp leaves or branches and bring them down to their mouth while sitting, standing, or lying on their backs. They insert the food into the side of their mouth, shear it off, and then chew it extensively before swallowing.

Red pandas are not very social animals. They live a solitary life, only pairing up to have and raise young, though they sometimes travel in small family groups. They mark their territory automatically as they walk with scent glands on the soles of their feet. The females have rather small home ranges, but the males have ranges nearly twice that size that may overlap several of the females' home ranges.

A female red panda will pick a location such as a tree hollow or rock crevice for a den, where she will bear between one and five cubs in early summer. Because the young grow so slowly (reaching sexual maturity at 18 months), the association between a mother and her offspring is a long one.

Red pandas use subtle body language when communicating with one another, including head bobs, tail arching, turning the head while jaw clapping, and bipedal posture with the forelegs above the head. They also use 'huff-quacks', whistles, and twitters when communicating at close range.

Red pandas are most active during dawn and dusk (crepuscular), occasionally venturing out at night. They are built for tree-climbing (scansorial) and spend most of their time in trees when not foraging. Red pandas descend trees headfirst. Movement along the ground is done with a slow gait, and sometimes faster bounding or trotting. While on the ground, red pandas carry their tails straight and horizontally.

Their main predators are the snow leopard and the yellow-necked martin. After eating, a red panda will lick its whole body and its limbs, wash its face with a forepaw, stretch, and rub or scratch its back and/or stomach against a tree or rock. They sleep in a ball on a branch with their tails over their faces.

Very little is actually known about red pandas. Almost all research done on them takes place in zoos. Once found in Nepal, northeastern India, Bhutan, China, Laos, and Cambodia, they have gone extinct in at least four of the seven Chinese provinces they once called home, and their numbers continue to dwindle. Soon, it may be impossible to perform research on them outside of zoos. Habitat destruction has put red pandas, along with their (possible) cousins the giant pandas, on the endangered species list. Soon, there may be no red pandas left in the wild.