Animated Cartoons in the USA - an Introduction Content from the guide to life, the universe and everything 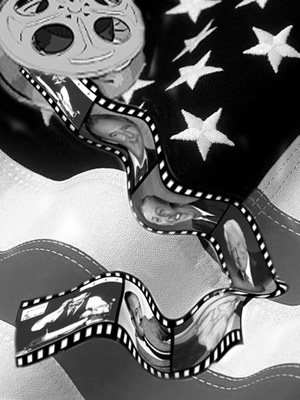 Ever since their creation, watching animated cartoons has been a favourite American pastime. One of the first American masters in the field was Walt Disney (1901-1966) who, with the help of Ub Iwerks (1901-1971), made a name for himself with a plucky little mouse named Mickey. Disney went on to produce some1 of the most iconic full-length animated feature films ever presented to cinema audiences such as Snow White and the Seven Dwarfs, Fantasia, Dumbo, Bambi, Lady and the Tramp and The Jungle Book.

In 1937 William Hanna (1910-2001) and Joseph Barbera (1911-2006) teamed up to form a partnership (and eventually their own animation studio) which produced some of the most well known cartoons over the next 50 years including Tom and Jerry, Pixie and Dixie and Mr. Jinks, Top Cat, The Jetsons and The Smurfs.

Propaganda films and newsreels were common during World War II, and some animators were inspired to produce overtly political cartoons that poked fun at the enemy. One such studio was Terrytoons, the creation of Paul Terry (1877-1971). In 1942 he introduced us to Mighty Mouse, possibly a parody of Superman who had made his first appearance four years earlier. After the war Terry created two wisecracking magpies called Heckle and Jeckle. These cock-eyed birds continued to amuse throughout the 1950s and 60s along with other Paul Terry characters such as Deputy Dawg and Hector Heathcote, and one of Hanna-Barbera's first big successes, Huckleberry Hound.

Along with MGM, who produced the Tom and Jerry cartoons, Warner Brothers was another major Hollywood film studio with an active animation department. Their Merrie Melodies and Looney Tunes animated short films introduced the world to Bugs Bunny, Elmer Fudd, Porky Pig, Daffy Duck and that ever-hungry canine Wyle E. Coyote who, with some regularity, would accidentally pilot his ACME brand rocket into a cliff and narrowly miss catching the Roadrunner yet again. The most fondly remembered, and critically acclaimed, Warner Brothers cartoons were the creation of their animation director Charles Martin 'Chuck' Jones (1912-2002) and his team. It was they who made Bugs Bunny's plane plummet towards the ground only to have it stop inches before impact, upon which Bugs said 'Hmmmm... outta gas' as he stepped out and walked away unharmed. Only they could have persuaded the young Elmer Fudd to chase Bugs over a cliff as Bugs told him that he should fall because of gravity, to which Elmer responded 'Uh-uh. Our class doesn't study gravity until next year' as he walked back to safety in complete violation of the Laws of Cartoon Physics.

Throughout the 1960s Hanna-Barbera2 cornered the market for animated cartoons made specifically for television with shows such as The Flintstones. A generation of kids watched as Fred Flintstone put the saber-toothed cat out for the night, only to have the cat return the favour by picking Fred up and dropping him on the doormat, whereupon Fred woke up the whole neighbourhood by banging on the front door and yelling 'WIL-MAAAA!!!' at the top of his voice. Or perhaps they followed Yogi Bear in his eternal quest for 'pic-a-nic baskets' while trying to outwit Ranger Smith and prove himself '...smarter than the average bear'.

In 1969 Hanna-Barbera unleashed bunch of meddling kids called Mystery Inc. and their dog Scooby Doo. Each week they managed to foil the plans of yet another in a string of unlikely villains, usually after Scooby had been fortified (or bribed) with his favourite treat - a Scooby Snack.

First appearing as a comic book, Teenage Mutant Ninja Turtles (created by Peter Laird and Kevin Eastman) became an animated cartoon in 1989. This must have been an interesting project to work on because a bunch of anthropomorphised turtles with a hunger for pizza and a training in martial arts seems like a bizarre premise. Compared to cartoons of earlier years the show was poorly animated, it had very little plot and the voices often got mixed up, but a seven-year-old would be unlikely to notice these flaws, instead being awed by the quick-witted dialogue and catchphrases. The turtles would make wisecracks that now, years later, might not seem so wise after all. One's sense of humour changes over the years, and when you're seven a comment such as 'You said a mouthful' can result in much side-grabbing laughter. Even the relatively poor production standards can, these days, make the show funny on a whole new level.

The late 1980s also gave birth to child prodigy Lisa Simpson and her not-so-smart brother Bart. The Simpsons, created by Matt Groening, is an animated sitcom whose success inspired similar sitcom-style cartoons such as King of the Hill and Family Guy. All three shows originally aired in the US on Sunday nights on the Fox channel. These kicked off a new trend in cartoons: the celebrity guest appearance which not only fails to wreck the celebrity's credibility but actually enhances it. As their popularity and pulling power has increased they have managed to entice ever bigger names from sports, academia, show business and politics to appear on the show, either as themselves or as a character, including holders of high office such as former British Prime Minister Tony Blair  (The Simpsons) and former Governor of Texas Ann Richards (King of the Hill). It is a very cool thing to be a guest on these shows.

1992 saw the launch of a new cable television channel called Cartoon Network which gave a new lease of life to cartoons of previous decades3 and which, after a year or two, commissioned its own cartoon shows. These were aimed at a slightly older audience, as were some of the cartoons already playing on another cable channel, Nickelodeon. They were a type of new, teenager/young adult-targeted cartoon with a relatively mature yet at the same time somewhat juvenile and sometimes gross style, such as Rocko's Modern Life, Ren and Stimpy, Cow and Chicken, I Am Weasel, The Powerpuff Girls, 2 Stupid Dogs and Dexter's Lab. These cartoons can be quite bizarre, often make very little sense and revolve mainly around a pre-occupation with all things disgusting, and the pattern has continued with shows such as Invader Zim and Spongebob Squarepants. Duckman, another animated sitcom, is just as bizarre and often quite disgusting, but its sexual and violent content means that this is most definitely an adult cartoon.

First broadcast in 2001, Cartoon Network's Adult Swim strand has featured shows such as Space Ghost Coast to Coast and its spinoff The Brak Show, Sealab 2021, Aqua Teen Hunger Force, Harvey Birdman: Attorney at Law, Home Movies and The Oblongs. An interesting aspect of some of these cartoons is that they have taken characters and settings from older cartoons such as the 1960s and 70s Hanna-Barbera productions Space Ghost, Sealab 2020 and Birdman and The Galaxy Trio and adapted them for a new and older audience.

The advent of the Internet has seen the development of a new genre of cartoon; animation devised for and presented on the World Wide Web. These range from stick-figure action clips such a Xiao Xiao to comedy series including LowBrow Studios and Homestar Runner. The Internet has also breathed new life into cancelled TV cartoons such as The Critic with new episodes made for the Web.

The ease with which content can be webcast by its creator instead of having to go through a TV company means there are big advantages with online cartoons such as not having to pitch your idea to a network executive, complete creative control and virtually unfettered freedom of speech and expression. Online cartoons can be interactive: there are some which give the viewer a choice of endings and plot-related events, and others that encourage the viewer to send in suggestions or questions. One of the best known examples of this is the potentially evil yet oddly loveable character Strong Bad (from Homestar Runner) who answers emails from viewers4.

We have no way of knowing in what direction cartoon animation will go from here or who the next Walt Disney, Chuck Jones, William Hanna or Joseph Barbera will be, but it's likely they will say they could not have made it without the groundwork laid by those pioneers in the field.

1If not most.2By this time they were studio owners in their own right.3Cartoon Network's owner, Turner Broadcasting, had purchased Hanna-Barbera a year earlier and owned the rights to H-B's entire back catalogue.4Strong Bad's emails may or may not be from genuine viewers.