The Ultimate Blue Sky Studios Animated Film Guide: 2010-2014 Content from the guide to life, the universe and everything 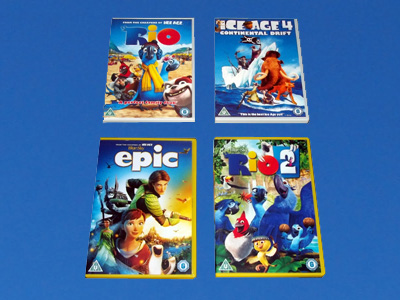 After the runaway success of their early years, by 2010 Blue Sky Studios had established themselves as an animation studio which had created one highly-successful series in Ice Age, but had struggled to emulate that success with any other films. In 2011 they released a film about a blue parrot that they hoped might well change that...

Below are listed Blue Sky Studio's films made during this period. Characters and actors in Bold appear in other Blue Sky films.

The Spix's Macaw is a real bird, believed to be extinct in the wild. Fewer than 100 birds in captivity exist at the time of writing (2018). The film is loosely based on a real story about a pet in America that joined the captive breeding programme in order to try to preserve the species. This was the first film Blue Sky had made since 2002 to feature humans. The film led to a Rio Edition of popular game Angry Birds.

Brazilian director Carlos Saldanha is actually from Rio. His initial idea was about a penguin being washed-up on Rio's beach; however, this was changed when Blue Sky learned of two other penguin-related animated films, Animal Logic's Happy Feet (2006) and Sony Pictures Animation's Surf's Up (2007). In turn, Rio's plot led to the cancellation of a planned Pixar film, to have been titled Newt1.

The Ice Age films continue to be inventive, if not increasingly silly, with this fourth instalment feeling a bit crowded. Far from the simple story of the first film, the plot now features: the breakup of a continent endangering everyone's lives, battles with pirates, Scratlantis, sirens, Manny's relationship with his daughter, Peaches wanting to fit in while still being true to herself, Manny's separation from his family, Sid's abandonment issues and relationship with his granny, a love interest for Diego and the rescue of a species from slavery.

Even so, this was the most successful animated film of the year, beating competition from DreamWorks' Madagascar 3: Europe's Most Wanted, Pixar's Brave and Disney's Wreck-It Ralph.

Epic is a stunningly beautiful film with breathtaking scenery. However, the story is fairly predictable. In many ways a rehash of films such as FernGully: The Last Rainforest (1992), Avatar (2009) and The Ant Bully (2006), it remains entertaining but perhaps unlikely to inspire multiple viewings. The film was written by William Joyce based on his own novel; Joyce had not only been heavily involved in Blue Sky's Robots (2005) but also Disney's Meet the Robinsons (2007) based on one of his novels, as well as providing art for early Pixar films. The character MK was inspired by his daughter, who died of a brain tumour at the age of 18.

Though a profitable film it was the year's seventh most successful animated film at the box office, behind Disney's Frozen, Illumination's Despicable Me 2, Pixar's Monsters University, DreamWorks Animation's The Croods and Turbo, and Sony Pictures Animation's Cloudy with a Chance of Meatballs 2.

Although a weaker film than the original, it remains entertaining. The plot, in which a glasses-wearing eccentric searches in a jungle for a lost flock of birds starts off very similar to that of Epic, in which a glasses-wearing eccentric searches in the woods for a lost tribe of little people. Yet after that the film finds its wings and soars. Though it follows a familiar and predictable dance, it delivers style over substance.

Rio 2 was the first Blue Sky Studios film to cost over $100 million to make3 but became the first, and to date only non-Ice Age Blue Sky film to make over $500 million. In fact, Rio 2 was the third most successful animated film of 2014, following Disney's Big Hero 6 and DreamWorks Animation's How to Train Your Dragon 2, beating films including The LEGO Movie, DreamWorks Animation's Penguins of Madagascar and Mr Peabody and Sherman, and DisneyToon Studios Planes: Fire and Rescue.

1This would have been about the last two newts of their kind in the world. Cameos for Newt feature in Toy Story 3 and Brave.2Technically a cat rather than a tiger.3Disney's Big Hero 6 cost over $165 million and DreamWorks Animation's films that year cost $135-$145 million.