Angry Birds Content from the guide to life, the universe and everything 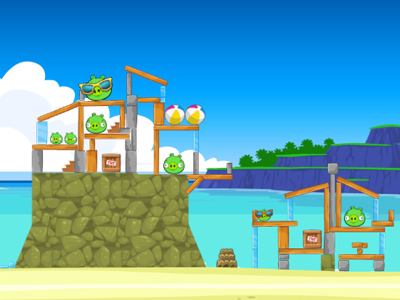 Cuddly toys. T-shirts. Hoodies. Jeans. Bedrooms. Cartoons. Playgrounds. Theme parks. Star Wars. There are Angry Birds branded versions of all of these things. Yes, even Star Wars, oh and Star Wars bird-like cuddly toys to boot. The ubiquity of these agitated avians is staggering, possibly horrifying, especially as they didn't even exist just a few years ago. And even then, they only existed as a collection of pixels on a smartphone screen. Somehow, this furious flock made the leap from a computer game into the real world, and back into a Star Wars themed variant of the game, all within three years of the original game being launched upon an unsuspecting public. How did all this happen? And where on earth did these Angry Birds come from to start off with?

The Mother Hen of Invention

Finland, that's where. From a software company called Rovio which had hit hard times. The company started in 2003, and had 50 staff at its height, but at the start of 2009 it was down to just 12. Company founder Niklas Hed knew that the company couldn't last much longer unless they made something spectacularly successful. He brought in his cousin Mikael to help him run the company, and develop an amazing game, just as soon as he worked out what it was.

Though he still didn't know what the game would be, Niklas did have a few ideas about how the game should work. Firstly, it needed to be a smartphone game. Touchscreens were starting to take hold and Niklas predicted, quite rightly, that they would soon be everywhere - if the game was going to be massive, this is where it needed to be. Coupled with that was the idea that the game had to be simple. A long list of instructions for the game would only serve to put off potential players. The game had to be so straightforward that users barely needed any instructions at all. Perhaps a few quick in-game graphics to explain how it worked, but that would be it. Also the game ought to have physics in it. Quite how the physics would manifest itself was fairly nebulous at this point, but Niklas liked putting physics into games, and he wanted it in this one too. Finally, the game had to be cheap to make. Finances were tight, and Niklas could only allow a budget of $25,000, though in the end the final sum was quadruple that.

It was in March 2009 that Niklas found his game. One of his games designers, Jaakko Iisalo, had created a screenshot of a cartoon flock of cross-looking birds moving along the ground towards a pile of blocks, and pitched the concept to the Heds. According to Niklas 'it was just magical' as the ideas began to coalesce around this image, though the game went through several variations before it was released. Eventually they settled on the idea that the player would use their finger to pull back a slingshot, setting the trajectory and speed for each bird nestled in it, which, when they lift their finger, is released from the slingshot, and flung at towers of blocks, with the intention of knocking them over. The physics that Niklas wanted in the game manifested itself as gravity, affecting the arc of the birds' flight, and the movement of the blocks once a bird strikes them. Sitting on, and around, the various blocks are a number of green pigs1 , who stole the birds eggs: the aim of each level is to destroy the pigs which then disappear in a puff of smoke.

There are several different birds in the game, many having additional skills, some of which can be activated by touching the screen while they are in flight. The round red birds are the staple of the game, having no special powers. The yellow triangular birds gain a suddenly boost of acceleration when they are tapped. The black birds explode when they are tapped or come to rest. The little blue birds are effectively a cluster bomb, splitting into three birds when tapped. There are many more types of birds than these in the game, and all have their abilities explained by a simple animation at the start of the first level on which they appear.

The first level is pretty easy. The player starts with red birds only, and has to 'knock off' a single pig. Getting three stars on this level is simple, which leads gently into the most addictive element of the game - the three star system. If the player succeeds at a level, killing all the pigs, then they are awarded one star automatically, and can move onto the next level. But to get three stars they have to get it exactly right, beat the level using the minimum of birds to get the maximum of points. It is not unknown for people to repeatedly play a single level over and over until they get the three stars2.

Released Into the Wild

The game was released in December 2009 as a paid-for version, and though it was not an immediate hit, it sold in modestly decent numbers around the globe, particularly in Finland and the surrounding countries. In fact, Niklas Hed has said that his mother burnt the 2009 Christmas dinner, because she was so distracted playing Angry Birds. This was a revelatory moment for him, as it was then it dawned on Niklas that the game had the potential to completely conquer the world - his mother does not normally play computer games, so if she's playing it, then maybe everyone will play it.

In February 2010 the game was featured on the front page of Apple's UK AppStore, and suddenly the game's ranking in the download chart went from around 600 straight up to number 1. Rovio subsequently released a free version, which contains adverts, as well as themed variants of the game. In September 2012 it was announced that one billion Angry Birds branded games had been downloaded. It is arguably the most famous touchscreen game on the planet, and the first one that most people think of.

Angry Birds Seasons, which was released in December 2010, is essentially more of the same, but this time you are flinging avians through seasonally themed levels - Halloween, Chinese New Year and St Patrick's Day all get referenced, for example. In fact, this is an expanded version of the mini-game Angry Birds Halloween which was released as an Apple exclusive two months previously.

Angry Birds Rio, which followed on 22 March, 2011, was a tie-in to the children's animated film Rio. The film follows the adventures of two macaws, Blu and Jewel, during their trip to Rio De Janeiro. Seeing the success of the Angry Birds game, and that they had a film involving birds in development, 20th Century Fox called Rovio, asking them to make a Rio version of the game. In keeping with Hollywood family-friendly values, no pigs are killed during the playing of this game; rather birds are released from cages, and monkeys knocked off the screen instead. The game was released on the same day as the film.

Angry Birds Space, which was launched exactly one year later, featured some redesigned space adventurer-type birds, many with different abilities to previous versions. It also featured localised gravitational fields, and once you fired off a bird into a planetoid's field, the bird would spin around the centre of gravity, in a gradually decreasing orbit, until it hit something, or got caught by another gravitational field, which could cause the direction of the bird to change. This game was developed with help from NASA. Many of the birds and their powers were changed for this game; for example, the triangular bird is purple here, not yellow, and you touch the place to want it to go, and it will aim straight for it, even if it means a complete change of direction.

May the Sqwark be With You

After the release of Space, with its development of the game engine to include 'outer space' physics, the Rovio developers reckoned that teaming up with a sci-fi franchise for the next game might be a good idea. And if you are teaming up with a franchise you might as well aim as high as possible, so they put in a call to Lucasfilm, who said yes. Over the next few months Rovio and LucasArts worked together on the development of the game, sharing ideas, refining character designs, and establishing the powers the birds would have.

Angry Birds Star Wars was released On 8 November 2012, with levels based on the original Star Wars trilogy. You start the game, as ever, as the red bird, but this time playing the part of Luke Skywalker3. Soon Luke is joined by the black bird, as Obi-Wan Kenobi, who has a 'Jedi force push-power'. Shortly after that Luke gets a lightsabre, with which he can perform a single swipe in mid-flight. Further characters are introduced according to the plot of the films, with C-3PO and R2-D2 only being used in bonus levels which unlock as the game proceeds. Equally the pigs are now transmogrified into Sandpeople, Stormtoopers, TIE Fighters and Darth Vader himself, while still retaining a certain pigginess to their features.

Shockingly, not everyone is in possession of a touchscreen device, and so that these poor individuals do not miss out on the Angry Birds experience, Rovio has produced edition of all the games in other formats, such as PC, Microsoft Xbox, and Nintendo DS. In the PC edition, for example, you pull the slingshot and activate the powers by using a mouse4. Social networks are not immune either. There is a special version of the game on Facebook, Angry Birds Friends, in which you can see how many stars, and how many points, your friends have scored on each level. There are also special created weekly challenge levels, typically five levels a week, and the friend who has the highest combined total number of points across those levels wins the week's prize. The Facebook version of Angry Birds Star Wars works in a similar fashion.

Failure to own any kind of electronic equipment is no barrier either - table top versions of the game have also been created. The set contains various sized blocks, several pigs, a slingshot, some birds, and a selection of level cards. Simply arrange the blocks and pigs according to the layout on the card, then put a bird in the slingshot, pull it back, aim and release. You may not be able to tap any birds while they are in flight, but it does provide a realistic hands-on experience. Also, you can create your own levels in whatever way you think would be most advantageous, or most challenging, once you've had enough of the cards.

Angry Birds was never intended to be a flash in the pan, and Rovio have continued to build the brand along with the games themselves. Licenses have been issued for all the things mentioned at the start of this Entry, yes, including playgrounds and theme parks. Whether Rovio and the Angry Birds will have the same longevity as, say, Disney and Mickey Mouse remains to be seen, but they aren't planning to calm down any time soon.

1The sickly colour is a reference to swine flu.2Well, this Ed did...3You can tell by the mop of hair he now has.4That is so last century.