The Ultimate Pixar Animated Film Guide: 2010-2014 Content from the guide to life, the universe and everything 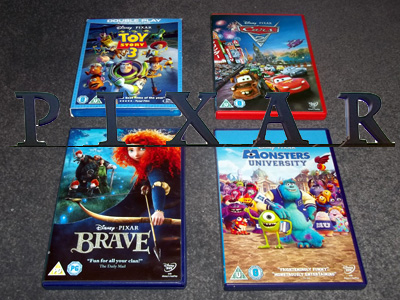 Since the release of Toy Story in 1995, film studio Pixar made ten highly successful animated films funded by Disney and had earned a reputation for high quality productions. As part of their contract, Disney owned the character rights to the films they had financed and had planned to make their own sequels to Pixar films. These were being made by an animation division called Circle 7 Animation, nicknamed 'Pixaren't'. In 2006 Pixar merged with Disney and work on these sequels was halted1, yet this had shown Pixar that there was high demand for sequels to their earlier films.

Pixar were determined that if someone was going make sequels to their films, it would be them. For the first half of the 2010s, they predominantly made sequels to their earlier films. Though they continued to operate as a filmmaker-led studio in which a group of experienced filmmakers nicknamed the 'Brain Trust' made the important decisions, following Toy Story 3 critics felt that the quality of their films began to slip. This was at a time when they faced increased competition from not only established studios such as Disney and DreamWorks Animation, but newer challengers Blue Sky and Illumination Entertainment.

Characters and actors in Bold appear in other Pixar films.

A sequel that manages to be every bit as good as the films that preceded it. This became not only the third animated film to be nominated for Best Picture Oscar, but also the first ever sequel to be nominated for Best Picture without any of its previous films being nominated. Toy Story 3 became the first animated film to make over $1 billion and on release was not only the most successful animated film of all time but also the fifth most successful film ever.

Toy Story 3's plot was inspired by the fact that many of the animators who had recently become parents when they made the first Toy Story had since seen their children grow up, and this experience was explored from the toys' perspective, echoing the moving sequence with Jessie in Toy Story 2.

Blake Clark became the new voice of Slinky Dog, as Jim Varney had died in 2000.

Cars 2 was perhaps a strange film for Pixar to make as Cars had been one of their least successful films. John Lasseter chose to concentrate on Mater, who he felt was one of Pixar's most interesting characters. By the time that Cars 2 was in production, three of the cast of the original film had died; Paul Newman (Doc Hudson Hornet), George Carlin (Fillmore) and Joe Ranft (Red).

The story, in which Mater becomes embroiled in international espionage, though fairly enjoyable, is weak. The promise of a great race circumnavigating the world is quickly reduced to trips to Japan, Italy and London where occasionally the film resorts to wheeling out hackneyed stereotypes in the hope of laughs. This was the first Pixar film not to be nominated for an Oscar. Despite this, Cars 2 was still the second most successful animated film of the year after DreamWorks Animation's Kung Fu Panda 2.

The screenplay was written by Brenda Chapman. Pixar announced with great pride that Brave would be their first film to be solely directed by a woman, only for Brenda to be replaced by Mark Andrews following creative disagreements. Despite this, Brenda has publicly stated that she is proud of the finished film which she feels has remained broadly true to her vision which was inspired by her relationship with her daughter.

When Brave was announced, some felt that Pixar were straying into Disney's traditional territory by making a film about a mediæval princess, yet Pixar have always been determined to show their versatility. Pixar's films are predominantly about relationships, even when set in exotic locations with unusual characters. This was the third most successful animated film of the year, after Blue Sky's Ice Age: Continental Drift and DreamWorks Animation's Madagascar 3: Europe's Most Wanted, but ahead of Disney's Wreck-It Ralph.

Disney's marketing department was severely criticised when they released Brave merchandise, especially Merida toys. They had redesigned Princess Merida to appear similar to previous Disney Princesses, creating a Merida in exactly the image that the Merida in the film rebels against. Following an overwhelmingly large petition, Disney soon apologised.

This, the first time Pixar had made a prequel, was the third most successful animated film of the year, after Disney's Frozen and Illumination Entertainment's Despicable Me 2. Not as strong a film as the original, it became the second Pixar film not to be nominated for an Oscar.