The Ultimate Pixar Animated Film Guide: 2015-2019 Content from the guide to life, the universe and everything 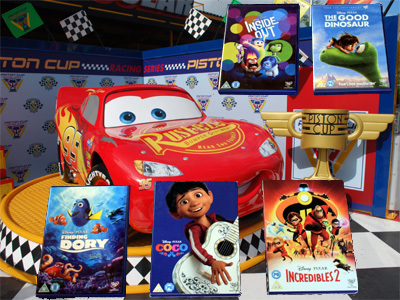 In 2015 Pixar remained firmly established at the very forefront of computer animation. Having already won 15 Academy Awards for their feature-length films and a further four for short films, they were unquestionably considered a byword for quality. Yet over the next five years Pixar would make more sequels than original films and also increase production, even making more than one film within a year. Would the quality of their creations suffer as a result, or would they retain their hard-earned place at the pinnacle of computer animated perfection?

This highly-praised film was inspired by Pete Docter's relationship with his daughter. Some of the early proposed titles included Joy Story and Brain Trust. The film's key message about embracing all emotions, including sadness, to be a well-rounded individual gives the film a greater dimension and encourages viewers to think about how they think and feel about the world around them.

The Beano published an issue in which their similar characters, the Numskulls2, watch Inside Out.

This was the first time that Pixar released two films in the same year, and some wondered whether the increase in the quantity of films impacted on this film's quality as it is not up to the expected standard. The film was originally going to be directed by Bob Peterson, who had been inspired by dinosaurs as a child, with a cast of John Lithgow, Judy Greer, Bill Hader, Neil Patrick Harris and Lucas Neff. Yet during production in 2013, Peterson was replaced by Peter Sohn and the cast was completely changed. It was announced that the dinosaurs could be seen as villains, rather than heroic characters.

This was the sixth most successful animated film of the year after Illumination Entertainment's Minions, Inside Out, Sony Pictures Animation's Hotel Transylvania, DreamWorks Animation's Home and Paramount Animation/Nickelodeon Movies' The SpongeBob Movie: Sponge Out of Water. It was the third Pixar film not to be nominated for an Oscar, following Cars 2 and Monsters University and is the lowest-grossing Pixar film to date.

Many of the child characters in Finding Nemo were voiced by children who have since grown up. This means that Nemo and Squirt are played by different actors. However Alexander Gould, the original voice of Nemo, does appear as a lorry driver. The shrimp Jacques had originally been played by writer/director Joe Ranft, who died in 2005. In Finding Dory Jacques is played by Joe's brother Jerome.

Paul Newman's performance as Doc Hudson was created using scenes recorded and not used for Cars, as Paul Newman had died in 2008. Bob Petersen has replaced Michael Keaton as the voice of Chick Hicks. Two other voice changes include Lloyd Sher, who since Cars 2 had replaced the late George Carlin as Fillmore, and Jerome Ranft replacing his older brother, Pixar writer and director Joe Ranft who died in 2005, as Red.

Cars 3 was the fourth most-successful animated film of the year, behind Illumination's Despicable Me 3, Pixar's Coco and DreamWorks Animation's The Boss Baby. It made under half the box office of Coco and only a little more than The Good Dinosaur.

The film is dedicated to Bud Luckey who had voiced Rick Dicker in The Incredibles and had died earlier in 2018. Huck Milner replaced Spencer Fox as Dash while Nicholas Bird provided some additional noises for Jack-Jack. The film begins with a 1960s stylised version of the Disney castle logo. It is also the longest computer-animated film to date.

Incredibles 2 was the most successful animated film of the year at the box office, making far more than its closest two rivals, Disney's Ralph Breaks the Internet and Sony's Hotel Transylvania 3: Summer Vacation, combined. It became the seventh animation film to make over $1 billion4 and on release was the second most successful animated film of all time after Disney's Frozen. Though nominated for a Best Animated Film Oscar it did not win.

With Toy Story 3 the perfect ending to the series, many wondered during production what this film would have to offer; however, it is surprisingly moving. The only criticism is that it does not feature Buzz Lightyear as prominently as in previous films. The film is dedicated to Don Rickles, the voice artist who played Mr Potato Head, who died before filming began. His family requested that he appear in the film and so, by using archive recordings of him made for previous films, computer games, etc, he appears posthumously.

Toy Story 4 not only won the Best Animated Film Oscar, it was also the second most-successful animated film of the year, behind only Frozen II5.

Though Pixar's performance continued to impress, by the end of 2019 the studio had undergone a number of changes in key personnel. In late 2017 John Lasseter, Pixar's original Executive Producer and Chief Creative Officer of Walt Disney Animation Studios and Pixar, admitted sexual misconduct6, resulting in an initial six month leave-of-absence followed by an announcement he would step down at the end of 2018. He was replaced as Chief Creative Officer at Pixar by Pete Docter, who had directed Monsters, Inc (2001), Up (2009) and Inside Out (2015). Founder Ed Catmul announced his plans to retire in 2019 and shortly afterwards key director Lee Unkrich announced he would be leaving Pixar, having been with the studio for 25 years.

In early 2019 Pete Docter announced that the films Pixar had next in production would be original films rather than sequels. In an era in which the animation landscape had changed, with many of the key studios consolidated into two conglomerates (the Walt Disney Corporation owning Disney, Pixar and Blue Sky while Universal own Illumination and DreamWorks Animation), what would the future hold for Pixar? The poor performance of films such as The Good Dinosaur and Cars 3 could be interpreted as meaning a loss of both quality and profit when they released multiple films in the same year, so would Pixar adjust the frequency of their films in the foreseeable future?

2020 and the Covid-19 virus brought a deadly challenge no-one foresaw that disrupted the entire way of life of people all around the world, with cinema and the animation industry just one area affected.

1Experimental Prototype Community Of Tomorrow theme park, part of the Walt Disney World Resort in Orlando, Florida2Created in 1962, the Numskulls have appeared in The Beezer and The Dandy as well as The Beano.3Only in North America where the film was released in November 2017. Other territories, such as the UK where the film was released in January 2018, did not have an accompanying short and Olaf's Frozen Adventure accompanied the December 2017 re-release of Frozen (2013). This is the first Pixar film to be accompanied by a non-Pixar short.4Short scale billion of one thousand million, also known as a milliard, not the long scale billion of a million million.5The remake of The Lion King was more successful, but it counted as live-action because it featured motion-capture rather than frame-by-frame animation.6Lasseter admitted he had on numerous occasions grabbed, kissed and made inappropriate comments regarding female members of staff, often, but not always, following the consumption of alcohol.