The Ultimate Pixar Animated Film Guide: 2000-2004 Content from the guide to life, the universe and everything 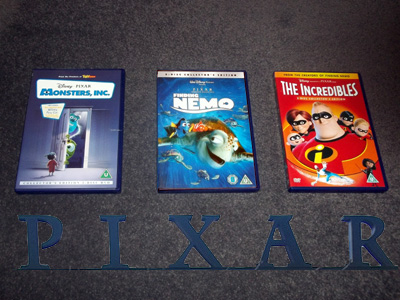 At the turn of the 21st Century, animation studio Pixar had established themselves at the forefront of computer animation having released three films co-produced with Disney. As part of a renewed deal, Pixar were contracted to provide Disney with another four films, excluding sequels. However, although Disney and Pixar were partners, the Chief Executive of the Walt Disney Company, Michael Eisner, considered Pixar to be his biggest rival. Distrust and jealousy of Pixar's success, at a time when Disney's animated films frequently flopped, soured the Pixar/Disney working relationship.

Pixar functioned as an animation studio by using what they called the 'Brain Trust', made up of Pixar's most experienced animators and filmmakers. The Brain Trust would analyse and criticise every element of every film in production to ensure that it met the highest possible quality standards. At that time the Brain Trust consisted of:

In mid-1994, while finishing Toy Story, the Brain Trust had met in the Hidden City Café in Point Richmond, California to discuss what their next film should be. Pete Docter proposed the idea of asking what if monsters were real, Andrew Stanton was keen to see a film set beneath the sea, John Lasseter wanted to make a film about automobiles and another idea mentioned was a film about the last robot left on an abandoned Earth. An idea about insects had been made as A Bug's Life, but now it was the turn of the film about monsters to be developed.

Pete Docter said that the idea came from the response that Toy Story had generated. Audiences overwhelmingly said that when they were young they all believed their toys led their own lives. Docter felt that a film about something else children believe are real, such as monsters, would have similar appeal. However this time the twist would be that monsters are as scared of children as children are of monsters.

Although work on the film began in 1996 with a treatment completed in 1997, it was not until 1998 that the film finally gelled. The character of Mike Wazowski was added and the age of the child that finds itself in Monstropolis was settled at being quite young. On release, Monsters, Inc. was another huge success for Pixar. Not only was it the most successful animated film of 2001, it overtook Toy Story 2 to become the second most successful animated film ever, after The Lion King3. It was also nominated for Best Animated Feature, but DreamWorks Animation's Shrek won instead.

Following on from Monsters, Inc. came the film about fish that was first suggested at the same meeting. The idea was proposed by Andrew Stanton who wished to create an underwater environment and was inspired by a photograph of two clownfish peering out of an anemone. Stanton was also a father, and so the film took on a theme of parenthood, overprotection and love despite disagreements.

The film faced competition from DreamWorks Animation's Shark's Tale released around the same time, yet on release Finding Nemo beat The Lion King to become the most successful animated film of all time and remains the best-selling DVD of all time. It also won the Best Animated Film Oscar. It made almost four times as much as Disney's animated film that year, Brother Bear.

For fish, however, the film may have been too successful; clownfish became a must-have pet after the film's release, with many children finding themselves unable to correctly look after their new tropical fish. Other children reportedly re-enacted the film's finale by flushing fish down the toilet, which again is unlikely to have ended well for the fish concerned.

In 2003 Roy E Disney, son of Roy O Disney and nephew of Walt, resigned as Disney Vice Chairman. This resignation was part of a campaign against Michael Eisner. Eisner was determined not to renegotiate the terms of a Pixar/Disney deal, which was due to expire in 2006. Steve Jobs felt the original deal undermined Pixar despite their established track record. Criticised for the poor performance of Disney's animated films, Eisner wanted to distance Disney from Pixar.

As part of the existing film deal, Disney retained the character rights to the Pixar films they had financed. Eisner announced that Disney would churn out straight-to-video sequels to these films. The sequels would be made by a new animation division called Circle 7 Animation, which was soon nicknamed 'Pixaren't'. Eisner also confidently predicted that when the next Disney animated film, Chicken Little (2005), was a huge box office success, it would prove once and for all that Disney did not need Pixar. Meanwhile Roy E Disney's 'Save Disney' campaign continued. This was designed to remove Eisner from power, and re-opening negotiations with Pixar was a top priority.

Following Finding Nemo an unusual film for Pixar was made, one that bypassed the Brain Trust. The idea came from someone then an outsider to Pixar's inner circle, Brad Bird. Bird had been at CalArts at the same time as Lasseter and had also briefly worked at Disney on The Fox and the Hound in 1981. In 1989 he helped develop The Simpsons, including directing the Do The Bart Man (1990) video, which was a UK number one hit five years before The Simpsons was broadcast there terrestrially. After gaining a strong reputation for his work on television series, such as the Rugrats pilot (1991), The Critic and King of the Hill, he made the highly acclaimed film, The Iron Giant (1999) for Warner Brothers, which sadly under-performed4. For his follow up at Warner Brothers he had proposed a story about a family of superheroes, yet Warner Brothers closed their traditional animation department.

Undeterred, Bird pitched his idea to Pixar who enthusiastically supported the idea, although their partners at Disney vetoed Bird as director. Even though he had successfully directed a music video that had become a number one hit worldwide, as well as a critically acclaimed film, they felt he was unqualified to direct as he had not made a film that had made over $100 million. There were rumours that this was resentment because when Bird left Disney he had animated a television series that many people preferred to Disney cartoons. It was only after Pixar president Ed Catmull appealed to Michael Eisner directly that permission for Bird to make his film was given.

A bit of a departure for Pixar. Not only was the film made by someone outside Pixar's existing establishment, Brad Bird also brought many of the animators he had worked with at Warner Brothers to work on the film. As the film had originally been intended to be cel-animated it had been developed without regard for the rules and limitations of computer animation. For example, unlike previous Pixar films, the characters were all human, the most difficult thing to be convincingly animated. The film was also set in 90 different locations. In traditional animation, each location merely requires background artists to create a new background but in computer animation, each location is a fully-realised 3D set animated to great detail, so is a much more laborious and difficult task. Pixar had previously kept the numbers of sets required per film to be under 30, yet The Incredibles trebled that number, and hence the amount of work required, in what was the longest film they had made to date.

There were also considerations about how similar the family's powers were to existing superhero characters, particularly the Fantastic Four. The Incredibles' 'Elastigirl' was also similar to DC Comics' 'Elasti-Girl', while the plot bears a close resemblance to that of Watchmen but there were no lawsuits over the similarities.

The film beat Shrek 2 to win the Best Animated Film Oscar. It was another financial success as it had the year's second biggest box office takings for an animated film after Shrek 2, beating competition from Shark Tale, The Polar Express and Howl's Moving Castle. Disney's film that year, Home on the Range, flopped.

1Winner of the 2001 Academy Award Best Animated Short Film.2The six-legged octopus that works in the restaurant is a tribute to his six-legged octopus in It Came from Beneath the Sea (1955).3The film's healthy box-office was perhaps helped by being the first film to show a trailer for Star Wars: Episode II – Attack of the Clones, as reportedly some Star Wars fans bought tickets just to see the trailer.4Though successful worldwide, the film flopped in America. It has been speculated that this was due to a lack of promotion.