The Ultimate Pixar Animated Film Guide: 2005-2009 Content from the guide to life, the universe and everything 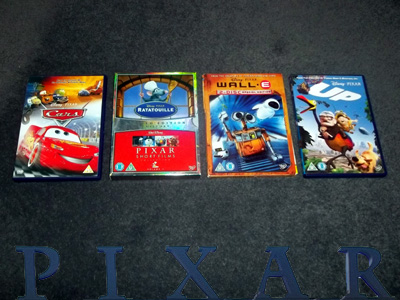 Since the release of Toy Story in 1995, Pixar had made six highly successful animated films funded by Disney and had secured a reputation for high quality productions. In the process their relationship with Disney's Chief Executive Officer, Michael Eisner, had soured. Eisner was jealous of Pixar's success at a time when Disney's own animated films were unsuccessful. Pixar's deal with Disney was due to expire, yet Eisner was determined not to renegotiate the terms of a Pixar/Disney deal, which Pixar's owner Steve Jobs felt undermined Pixar despite their established track record.

As part of the existing film deal, Disney retained the character rights to the Pixar films they had financed. Eisner planned to churn out straight-to-video sequels to the Pixar films they had financed. These would be made by a new Disney animation division called Circle 7 Animation, unofficially nicknamed 'Pixaren't'. Eisner confidently predicted that his next Disney animated film, Chicken Little (2005), would be a huge box office success and prove once and for all that Disney did not need Pixar.

In mid-1994, while finishing Toy Story, Pixar's 'brain trust' had met in the Hidden City Café in Point Richmond, California to discuss what their next film should be. Ideas about insects had been made as A Bug's Life, a proposal on investigating what if monsters were real became Monsters, Inc. and an idea for setting a film beneath the sea had become Finding Nemo. Two other ideas had been proposed at that meeting. One was about the last robot left on an abandoned Earth. The other was about cars.

Pixar's films are summarised and reviewed below, with recurring characters and actors in bold. The short films accompanying the main features are listed too, as is a selection of some of the cameos and in-joke references. There are far more; for example, the number '95' is common, referring to the year in which their first film, Toy Story, was released. This includes the race number of the main character in Cars, Lightning McQueen.

Cars had long been a subject dear to John Lasseter, whose father had been a Chevrolet dealership's parts manager. It also resembles a 1952 Disney short film, Susie the Little Blue Coupe. Although work began on planning a story back in the 1990s, it wasn't until Joe Ranft took over to write the story that the project began to take shape. Much of the research for the film took place along America's Route 66. John Lasseter has declared that Mater is Pixar's most successful character, and he quickly acquired his own spin-off series. Tragically Joe Ranft died in a car accident before the film was released, and it was dedicated to his memory.

Despite having Pixar's lowest box office gross since A Bug's Life, Cars was the second most successful animated film in 2008, being beaten at the box office by Blue Sky's Ice Age: The Meltdown. Cars was released six weeks after Pixar was acquired by Disney. It also became the second Pixar film to have a sequel commissioned, following Toy Story, when the 12th Pixar film, Cars 2, was released.

Ratatouille was first proposed back in 2001 by Jan Pinkava. Pinkava had been born in Prague and raised in England where he had gained a PhD in theoretical robotics. After directing computer-generated adverts in a firm based in London, he applied to Pixar where he wrote and directed the Oscar-winning short film Geri's Game. Although he wrote the script and designed sets for Ratatouille, in 2005 Brad Bird rewrote the script and took over directing.

WALL·E is not a film that can be adequately summarised in a couple of short paragraphs, dealing as it does with romance, consumerism, obesity rates, narrow-mindedness, finding beauty in unusual places and ecology to name but a few. WALL·E himself appears as a cross between R2-D2 and Number 5 from Short Circuit, with a surprisingly expressive binocular-shaped face. The idea behind this film had been proposed back in 1994, with Andrew Stanton and Pete Docter working on developing the idea, before Docter concentrated on Monsters Inc. and work did not resume until after Stanton had finished Finding Nemo. The film developed from asking 'what if mankind had to leave Earth and someone forgot to turn off the last robot?' and assumed that the robot would start to become attached to the rubbish he was sorting. In particular, WALL·E finds inspiration and learns about love from the old musical Hello, Dolly!.

This film was nominated for six Academy Awards, a feat only equalled by Beauty and the Beast (1991). Many of the film's sleek designs, including EVE, were inspired by Apple products, as Pixar had been owned by Steve Jobs, the founder of Apple Computers, who at the time was a shareholder and director of Disney. It was the third most successful film of a highly competitive year, beaten at the box office by DreamWorks' Kung Fu Panda and Madagascar: Escape 2 Africa.

The first 11 minutes of this film surely count as animation at the pinnacle of perfection. A film about a grumpy old man was perhaps not the obvious choice, but the plot about a house that escapes into the air, inspired by Pete Docter's recurring desire to be able to escape from socially awkward situations as a child, is uplifting in more ways than one.

The character of Dug the dog was in fact developed for a different film project, and was added to the film after the initial story had been developed. Similarly the character of Russell was an even later addition, inserted to allow Carl to show his caring side and to help the film flow, rather than feel episodic.

Carl's face shape and his possessions were all visualised as being square and set in their ways, while Russell's face was created to be the same shape as the balloons. Like the balloons he lifts Carl's spirits and sets him free. Pete Docter's daughter Elie plays Ellie.