The Ultimate Pixar Animated Film Guide: 1995-1999 Content from the guide to life, the universe and everything 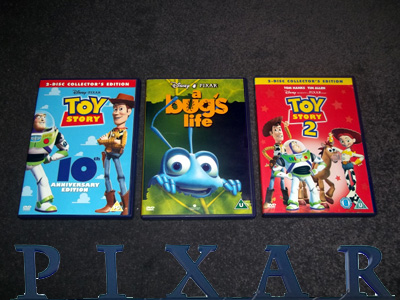 Since 1995, Pixar has been a film studio at the forefront of computer animation. Its name has come to stand for quality and innovation. Yet the story of Pixar begins with how one of the most successful directors of all time got divorced and failed spectacularly with a film about a bird, combined with the firing of a young, talented, imaginative animator.

How Pixar was Created

The founder of Pixar was Ed Catmull, a computer scientist. In the early 1970s he was working at the University of Utah with Ivan Sutherland, who had invented an early graphics interface programme called Sketchpad. In 1973 Catmull made a 3D digital animation of his left hand, which later appeared in the film Futureworld (1976). Soon after, he became director of the Computer Graphics Lab at the New York Institute of Technology.

In 1979 George Lucas, the director of Star Wars, invited Catmull to join Lucasfilm, as head of the newly-formed digital computer division to be called the Graphix Group, along with other Computer Graphics Lab staff. The Graphix Group concentrated on digital graphics, editing and audio rather than animation. Notable work included the Genesis Effect for Star Trek II: The Wrath of Khan (1982)1 and the stained-glass window knight in Young Sherlock Holmes (1985).

In 1983 Disney fired a young animator named John Lasseter for proposing they make a film with computer animation2. He quickly became Lucasfilm's first computer animator and made a short film entitled The Adventures of Andre and Wally B (1984). Yet both George Lucas and Lucasfilm were in trouble. George Lucas had just gone through a costly divorce and then lost an awful lot of money making Howard the Duck (1986). To raise money, George Lucas decided to sell off Lucasfilm's digital computer division, initially asking for $15 million. Discussions with Steve Jobs at Apple fell through, but when Jobs left Apple he bought the company for $5 million. Thus in 1986 Pixar was born.

At first Pixar concentrated on selling the Pixar Image Computer and software. To demonstrate the Pixar Image Computer's capabilities, in 1986 Lasseter animated Luxo Jr., a short film about an anglepoise lamp and a ball. The animation was far more successful than the computer it was advertising. Another short, Red's Dream, followed in 1987 and Pixar's third short film, Tin Toy (1988) about a musical toy hiding from a violent baby, was the first computer animated film to win the Academy Award for Best Animated Short. Despite this success, the studio was still relying on making adverts in order to stay afloat, but hoped to attract enough investment to make a full-length film.

Although before the 1990s Disney had always made their animated films in-house, this position changed when they began their first co-production, The Nightmare Before Christmas (1993), with Skellington Productions. Even before the film was finished it was expected to be successful, and so in 1991 Disney decided to fund Pixar's first feature-length film, Toy Story. Pixar signed a three-picture deal in which Disney would fund the films, retaining rights over the stories, merchandise and characters, and Pixar would receive 10% of the profits.

No description of the story of Pixar would be complete without looking at Pixar's films themselves. These are summarised and reviewed below, with recurring characters and their actors in bold. As part of Pixar's identity has been their policy of including a short film before each of their features, the supporting short films are listed too, even though some were made many years before the film they accompanied in cinemas. A selection of some of the cameos and in-jokes are also mentioned, as the films contain many references to other Pixar and Disney films, characters and staff. There are far more; for example, many car number plates contain the initials of Pixar staff. Similarly the code 'A113' occurs in every Pixar film. This refers to California Institute of the Arts' graphic design and character animation classroom, where many of Pixar's animators studied.

The story evolved out of the idea of a buddy movie involving a wooden ventriloquist's doll named Woody, and Tinny the wind-up toy from Tin Toy. The doll became a cowboy and Tinny was replaced by a shiny, plastic astronaut toy named after Buzz Aldrin. Joss Whedon helped co-write the script, gelling it together and adding Rex. Billy Crystal was asked if he wanted to voice Buzz, but he declined. While the film was in production, Disney executives kept interfering with the plot and ordering changes, so that when the preliminary version of the film was seen in November 1993, the result was a disaster3. Though Disney insisted on having complete control over the film, Lasseter asked Walt Disney Picture's Chairman Jeffrey Katzenberg for a two-week reprieve, which was granted. For the next two weeks all the changes that Disney had insisted on were removed. By the time of the next screening, the film was a modern masterpiece.

Although Pixar hoped to include more examples of real toys in the film, not every toy company supported them. The character of Bo Peep was originally planned to be a Barbie doll, but Mattel refused permission. Similarly Hasbro refused permission for GI Joe to be in the film when they learned that it would be a toy destroyed by Sid. A fictional 'Combat Carl' was substituted instead.

While the film was in production there was great uncertainty about whether it would earn the $75 million needed to break even. Steve Jobs even seriously considered selling Pixar to Microsoft in 1994. This wasn't the first time that Disney had been involved in a project about toys coming to life, though - Jim Henson's A Christmas Toy (1986) inspired spin-off television series The Secret Life of Toys (1994). The film was released just before Christmas 1995 to tremendous critical and financial success, making over $350 million. Not only was it the first computer animated film, it was the first ever animated film to be nominated for a Best Screenplay Oscar, winning a Special Achievement Award. It is also the last film to date to win a Special Achievement Award. It has been selected by the National Film Preservation Board as a film to be preserved in the Library of Congress. It was the most-successful animated film of the year, beating Disney's Pocahontas.

The merchandising was also incredibly successful. In fact, the difficulty in finding a Buzz Lightyear toy for Christmas inspired the 1996 film Jingle All the Way in which a father, played by Arnold Schwarzenegger, searches for a Turbo Man doll.

The way that Pixar has made films is through having a 'Brain Trust' of experienced filmmakers, directors, writers and producers. Their role is to analyse and argue over every film in production to ensure that it meets the highest possible quality standards. In mid-1994, while finishing Toy Story, the Brain Trust met in the Hidden City Café in Point Richmond, California to discuss what their second film should be. Pete Docter proposed the idea of asking what if monsters were real, Andrew Stanton was keen to see a film set beneath the sea, John Lasseter wanted to make a film about automobiles and another idea mentioned was a film about the last robot left on an abandoned Earth. However writer Joe Ranft4 and Andrew Stanton had an idea based on the Aesop fable  The Grasshopper and the Ant, with a working title of 'Bugs'. This film idea would become A Bug's Life.

Meanwhile in 1994 Jeffrey Katzenberg had left Disney, as he was frustrated at his lack of promotion following the tragic death of Disney President Frank Wells in a helicopter crash. Along with Steven Spielberg and David Geffen, Katzenberg formed his own film studio: DreamWorks SKG. This studio's first animated film was also going to be a computer-animated movie about insects, named Antz. Both films involve a unique ant who refuses to be a thoughtless clone, falls in love with his princess, and saves the day and his colony. Katzenberg was determined that Antz (1998) would arrive in cinemas first...

The overall story certainly isn't unique6. There are clear-cut goodies and baddies and, with its greater emphasis on slapstick humour than Toy Story, A Bug's Life is strongly aimed at children. Yet though it is a weaker film than Toy Story, it was much more successful than Antz, which had a far darker tone. A Bug's Life was the most successful animated film of the year, beating Disney's Mulan and DreamWorks' Antz and The Prince of Egypt.

Following the tremendous success of Toy Story, Disney were keen for a sequel, proposing a 60-minute direct-to-video follow up. After all, seven of the nine Disney animated films made during the 1990s had had direct-to-video sequels. Pixar, however, came up with a revolutionary idea that had not occurred to the Disney executives; what if the proposed sequel was made to the same high standard and with the same love and care as the original film so that it could actually be released in cinemas?

Toy Story 2 is another high-quality film. It deals with the themes of growing old, abandonment, love and heartbreak. On release not only was it the most successful animated film of the year, it became the second-highest-grossing animated film of all time after The Lion King (1994). There is plenty for both adults and children to enjoy, with references to many other classic films including 2001: A Space Odyssey, Star Wars, Goldfinger and Jurassic Park.

While the film was in production, Disney extended their contract with Pixar from three films to a five-film deal. Although this was Pixar's third film, Disney's Chairman Michael Eisner believed that sequels would not count8. This was the first cause of a major falling out between Michael Eisner's Disney and Pixar. The situation was not helped by the fact that, for the third time in a row, a Pixar production had been the most successful animated film of the year, with Toy Story 2 beating Disney's Dinosaur and Fantasia 2000.

1Also seen in Star Trek III: The Search for Spock (1984) and Star Trek IV: The Voyage Home (1986).2In 2006, John Lasseter would return to Disney and become Walt Disney Animation Studio's Chief Creative Officer.3The biggest difference was that Woody was initially required to be sarcastic about his fellow toys.4Ranft had worked with Tim Burton to make James and the Giant Peach (1996).5Winner of the 1998 Academy Award Best Animated Short Film.6See films such as Seven Samurai (1954), The Magnificent Seven (1960), Battle Beyond the Stars (1980), ¡Three Amigos! (1986), The Tale of the Bunny Picnic (1986) etc.7A British television host, best known for presenting CBBC during the 1990s. 8This was because of merchandising and character rights. A completely new film would create a whole range of merchandising and toys, whereas a sequel, no matter how well made, merely adds new characters to an existing range.