'Seven Samurai' - the Film Content from the guide to life, the universe and everything 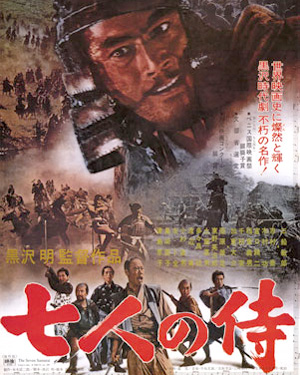 Akira Kurosawa is one of the most influential film directors of the 20th Century. His work has inspired many famous directors in the West, including George Lucas and Martin Scorsese.

Seven Samurai is Kurosawa's most famous work and is a triumph of post-war Japanese cinema. It was so successful that it was remade as the famous western The Magnificent Seven.

What's it All About?

Set in the 13th Century, Kurosawa's film deals with the struggle between the different castes of Japanese medieval society.

Specifically it focuses on one village that is yearly left to face near famine and complete destitution by a group of Ronin (masterless samurai) bandits. After harvest each year the robbers steal the fresh rice crops, beat the men and rape the women. The villagers decide that this year it cannot be allowed to happen again. So they hire their own Ronin to protect the town. However, they can only afford to pay the men with a meal of rice a day till the job is done.

As a result of this they slowly get a very strange and disparate band of seven samurai. All the Ronin have different reasons for taking the job. Some want to prove they have what it takes to be samurai, some want to test their skill in a severely unbalanced contest and some, like the leader Kambei, are noble souls with clouded pasts that do the job because of honour.

The stunning thing about the film is that it does not stick firmly to the stereotypes it creates early on for each character. All of them change and develop over the course of the film. Most fascinating is the way they react to the stresses of being besieged by the forty bandits in the second half of the film.

The leader, Kambei, is played with enormous screen presence and calm by Takashi Shimura but the award for best performance has to go to the Kurosawa favourite, Toshiro Mifune.

Mifune, an actor used as the lead in many of the director's films, plays Kikuchiyo, the samurai who is not all he seems. It is clear to the more skilful warriors that Kikuchiyo is not a fully trained Samurai. He is given away by his hilariously poor fighting skills and his drunkenness. Nonetheless he gets taken along out of desperation for numbers and an extreme persistence on his part.

As the film progresses the amoral charlatan slowly reveals himself to be a man who, though poor in manners, is skilful in understanding the farmers and who is also highly dignified in his soul. The most affecting moment in the film is when Mifune's character reveals his past.

The stunning performance from Mifune almost makes this into a film about his character rather than the seven as a whole and the instinctual relationship between his energetic style and Kurosawa's camera works perfectly.

Beyond the excellent performances it is a film of constant action and amazing plot.

Kurosawa gave birth to the action film fully formed when he created Seven Samurai, giving the world a film that is as vital and alive with tension as Die Hard, The Matrix or any other recent action thriller. His rendition of the final battle is one of the most amazing scenes on celluloid and the thing Kurosawa excels at is giving his movie a soul as well as special effects and excitement.