'Antz' - the Film Content from the guide to life, the universe and everything 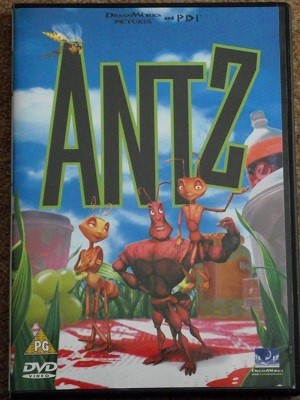 Antz was the first computer animated film produced by DreamWorks and PDI and was only the second computer animated film that had ever been made, after Disney Pixar's Toy Story. It took two and a half years to make and was released in 1998 so as to arrive in cinemas just before Disney Pixar's similar film A Bug's Life. However, instead of stealing its rival's glory, it gained DreamWorks a reputation for being a bit of a copycat. It cost about $105 million to make and grossed about $170 million in cinemas around the world, whereas A Bug's Life cost a bit more ($120 million) but grossed $363 million. Antz was written by Chris and Paul Weitz (who went on to write non-animated films including About a Boy) and was directed by Eric Darnell (who later co-directed films in DreamWorks' Madagascar franchise) and Tim Johnson (who also directed later DreamWorks animated films including Sinbad: Legend of the Seven Seas).

In the film, worker ant Z1 is wondering about the meaning of life and his place in the colony when he meets Princess Bala, who is similarly contemplating her destiny as the heir to the Queen. They dance in the colony's bar and start to fall in love. However, dark times follow as the ants wage war on termites while a sinister plot is brewing closer to home. Soon Z and Bala find themselves outside the anthill and hoping to find Insectopia.

Z is voiced by Woody Allen, and has similar mannerisms and foibles. So much so, Woody Allen had to stop viewing the film after it had been completed, because he never likes to see his own acting, and he found that watching Z was too much like watching himself. Woody Allen was most well-known as a writer and director before being approached for the role of Z, but he had also enjoyed a range of acting roles and cameos before then, most notably in Annie Hall.

Princess Bala is played by Sharon Stone and is regal but with an adventurous side. Sharon Stone is most well-known for Basic Instinct but had had a range of parts in films and on TV before lending her voice to Antz.

Sylvester Stallone voices Weaver, a soldier ant who is Z's best friend. Stallone's features influenced the design of Weaver's face, and the ant is muscular and protective of his friends. The actor was famous for action films including Rocky and Rambo before being offered the part of Weaver.

Weaver's sensuous love interest Azteca is voiced by Jennifer Lopez. 'J Lo' was best known as a singer, although she had had a few parts in films and TV series before Antz, and she went on to star in romantic comedy Maid in Manhattan as well as providing the voice for a character in the Ice Age animated film franchise, amongst other roles.

Danny Glover plays Barbatus, a soldier ant who takes Z under his wing as the ant army heads out to battle the termites (mirroring the actor's role alongside Mel Gibson in the film Lethal Weapon). Danny Glover had provided voices for other animations, including DreamWorks' The Prince of Egypt, and also played Nelson Mandela in a biopic.

General Mandible is the leader of the soldier ants and Princess Bala is his fiancée. He gives impassioned speeches to the massed ranks in the style of a military dictator, but his personal goals are more important to him than the welfare of the colony as a whole. He is voiced by Gene Hackman, who had played Lex Luthor in the Superman films amongst many other roles.

Christopher Walken plays Cutter, a flying ant and deputy to the General, although he finds he is happier working for the good of the colony than for himself. Christopher Walken had also had a role in Annie Hall and appeared on Saturday Night Live but is also known for other films including his villainous role in the James Bond film A View to a Kill.

The Queen of the ant colony is played by Anne Bancroft, the veteran of stage and screen who was most famous for her role as Mrs Robinson in The Graduate. The Queen seems satisfied with her role of populating the colony, and she is able to converse with General Mandible and her eldest daughter Bala while greeting each of her newly-hatched larvae and passing each 'baby' to the workers to be looked after.

In many ways, the film is true to life. Some of the main characters have names inspired by the names of different ant types, such as Cutter being a leaf-cutter ant. An ant colony is divided up into soldiers and workers with a queen. Although they don't go to a bar to do so, ants enjoy drinking from an aphid's bottom when they get the chance.

However, there are many ways in which the film takes liberties with real life in order to make the film more appealing or more spectacular. So that the ants are not too alien to the film's human audience, all the ants stand upright on four of their six legs. These legs move in pairs so that the ants walk with a human-like gait, and the remaining two legs are their arms. To make the termites a more sinister enemy, they are much larger than the ants and squirt acid, whereas in fact ants are generally larger than termites and can squirt acid. Also, termite workers can be both male and female, but ant workers are all female, so Z being male makes him more like a termite than an ant (Termitez obviously mustn't have had the same ring to it as Antz did as a title, and a film with a predominantly female cast of ants must have been out of the question too).

The intention of the directors was to make Antz into an animated film that wasn't for young children - this meant that they could include scenes that wouldn't be found in a Disney film and had the effect of distancing DreamWorks from its rivals. They certainly succeeded in that goal, even pushing the PG classification to its limit, but didn't appeal to as large an audience as a result.

The bad language, although relatively mild compared to films aimed at adults, and not as much as the directors had wanted to include, is surprisingly frequent. There are a number of suggestive comments and innuendos too, although they are more likely to be appreciated only by adults and pass over children's heads. The most dark and disturbing parts of the film, though, are the scenes with large amounts of violence that, if they had been depicted by human actors, would surely have pushed the film into a higher classification.

The battle against the termites is particularly distressing, as Z is the sole survivor, and even a dash of black humour can't distract from the scene of desolation and horror. Later in the film, we see that Sylvester Stallone is well cast as the soldier ant Weaver, as he experiences a torture scene reminiscent of one that Rambo faced in his 18 Certificate film. Another sad scene features the wasps. Muffy is waspish indeed, so audiences aren't encouraged to like her, but she clearly loves Chip and he loves her, so when she meets a typical insect fate, Chip's grief is very real. He drowns his sorrows in alcohol, and becomes a very human character in spite of his insect shape.

The animation itself displays excellent attention to detail. Close up facial expressions were carefully crafted, as were panoramic crowd scenes with up to 60,000 ants being animated. The interior of the anthill is immense, with a strong 3D effect created by lighting and shadows. Product placement looms large (literally) in the film, as Bala and Z encounter a Pepsi can and a bottle of Mountain Dew on the ground outside the anthill. A can of Kendall Motor Oil also appears as a nod to the film's art director Kendal Cronkhite.

The film has layers to it, beyond the surface story, as it can be analysed from political and philosophical perspectives. Z is struggling to find his identity in a society where his role is determined by factors outside his control. There is a ruling class that oversees the masses and is prepared to sacrifice them for personal gain, but when Z is mythologised as a revolutionary hero, his fellow workers start to question their identities too, with some wanting a choice to reject their role in the society, and others being keen to retain the status quo. The collective mind is easily swayed, though, as chants of 'Z, Z, Z' are soon replaced by 'Mandible, Mandible' after a persuasive speech by the General. Motivational banners on display within the anthill, such as 'Conquer Idleness' and 'Freetime is for Training' emphasise how the worker ants are encouraged to strive hard and work as a team for the greater good.

Humour of various kinds is a key feature, from basic toilet humour when the ants meet dung beetles, to comedy that would be appreciated more by adults than children, such as when Z talks to a psychiatrist in a classic Woody Allen-style sketch.

The music is well-chosen to enhance the film. Harry Gregson-Williams and John Powell used instruments such as tiny trumpets to make the background music sound like it was being played by ants, and the feature songs fit in well with the themes of the film. Yoko Ono agreed to them changing the lyrics of John Lennon's song so that the ants ask to 'Give Z a Chance'. Pete Seeger's 'Guantanamera' is perfect for the ants to dance to in the bar, and then Lerner and Loewe's 'Almost Like Being In Love' is apt as Bala and Z become closer. 'I Can See Clearly Now' is played over a shot from high above, where the audience can see the anthill near a bin in Central Park in New York. Finally, there is no better song than 'High Hopes' sung by Doris Day, about an ant wanting to move a rubber tree plant, to accompany the closing credits.

Antz was released on VHS and DVD in 1998 and was re-released on DVD in 2001 with extras including audio commentary by the directors, and 'making of' features.