Paul Newman - Actor and Charity Entrepreneur Content from the guide to life, the universe and everything 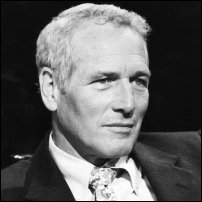 I loved watching him in Cool Hand Luke. Those blue eyes, and that smile... He could melt your heart!
– An h2g2 Researcher

During a career which lasted over five decades up to his retirement in 2007, actor Paul Newman starred in over 50 films. He featured in the 'Top Ten Movie Stars of the 1960s' according to Box Office figures. Plaudits include nine Oscar nominations and one win.

Paul Leonard Newman was born in Ohio on 26 January, 1925. His father Arthur, a sports shop owner, was emotionally distant and believed in giving his children a strict and frugal upbringing even though they were relatively wealthy. Older son Art Junior was athletic and an academic. Paul was smaller in stature: even though he grew to 5'9" his build was always lean. He didn't fare well in the classroom and lacked the drive and determination of his older brother. The sibling rivalry couldn't have been more pronounced: in the year that Paul was thrown out of the school football team for fighting, Art Jr was lauded 'Most Likely to Succeed'.

When America joined WWII, Newman applied to become a pilot, but he failed the medical due to colour blindness. Unperturbed, he joined the US Navy instead, operating a radio on board a warship. Following his discharge, he attended Kenyon College1 in Ohio. He describes his time at Kenyon Ohio college 'among the happiest and most formative of my life'. After graduating with a degree in Drama and Economics, he enrolled at Yale drama school, and became a door-to-door salesman to pay the bills.

Newman married Jackie Witte in December 1949, and they had a son, Scott, born on 23 September, 1950. This was the year that Newman's father died, so the family moved back to Ohio to take over the running of the family business for a few years. Deciding to pursue his dream of acting, he sold his share of the family business to his older brother and moved his own growing family back to New York where he joined the famous Actors' Studio. Jackie was pregnant with Susan at this time, and not long after she gave birth to another daughter, Stephanie.

While Newman was appearing in a Broadway play called Picnic he was offered a contract by Warner Brothers and immediately signed up. He left for Hollywood, leaving his family behind while he chased his dream. Given a high-profile role in The Silver Chalice opposite rising star Jack Palance did not work out as planned. Even though he was billed as 'the new Brando' and Hollywood was positively drooling over his dreamboat looks, critics panned the film. Newman himself thought the finished product so awful that he paid for a whole-page advert apologising to everyone who bought a ticket to see his movie. Newman then returned to his family and took a job on stage in The Desperate Hours.

Some television work was offered to him and he accepted it, In those days it was all live performances so again the family were separated. Co-starring in one of the TV shows, The Death Of Billy The Kid was rising starlet Joanne Woodward. Newman was offered a part in 'Our Town', a 1955 musical episode of Producers' Showcase starring Frank Sinatra and Eve Marie Saint. Although the part called for him to sing, which he wasn't comfortable with, he carried it off (although he never repeated the experience). His next film role was in The Rack which also starred Lee Marvin: unfortunately the subject matter (war, torture and anti-war propaganda) did not appeal to his growing fanbase and with the audience staying away, the film bombed. Newman and Jackie Witte divorced in 1958, and Newman married actress Joanne Woodward, whom he co-starred with in several films.

Obviously, with a career spanning 50 years, it's not possible to cover every film appearance here, so the author has selected a few to discuss:

Cat On A Hot Tin Roof

Tennessee Williams's Cat On A Hot Tin Roof pitted Newman's method acting against the glamourpuss of the day Dame Elizabeth Taylor and a strong supporting cast, including Burl Ives as the scheming would-be grandfather. Brick Pollitt (Newman) will only inherit if his wife Maggie (Taylor) has children. They haven't had a family because Brick won't make love to his wife. It's never spelled out in the film that the reason for the lack of desire for his beautiful wife is that Brick bats for the other team; Williams wrote Brick's character as a homosexual. Hollywood screenwriters chose to portray Brick as a mean and contemptible wife-abuser, and even though the writer hated the finished product, it was a Box Office smash. The heated arguments between Newman and Taylor set the screen on fire, and earned both of them an Oscar nomination.

One of Newman's biggest screen successes was the 1969 film in which he co-starred with Robert Redford, Butch Cassidy and the Sundance Kid, a romantic-comedy-western from which memorable lines can be heard quoted four decades on. Had it not been up against the likes of eventual-winner of 'Best Film' Midnight Cowboy, starring Jon Voigt and an unrecognisable Dustin Hoffman, there's not much doubt that Butch Cassidy and the Sundance Kid would have swept the board.

In 1971, Newman formed a production company named First Artists, with Sidney Poitier, Barbra Streisand and Steve McQueen. The company encouraged performers to produce their own projects.

The Sting (1973) saw the long-anticipated reuniting of Newman and Redford, with many wondering if the pair could recreate the magic of 'Butch and Sundance'. The result was a resounding Yes, the film won seven Oscars, as well as a host of other awards, including People's Choice Award 'Favourite Motion Picture' in 1975. The Sting has been much-parodied and the format copied in many genres since.

Back in 1974 disaster movies were big business and a huge Box Office draw. Newman was cast as the architect 'Doug Roberts' who was responsible for the design of a skyscraper which goes up in flames thanks to shoddy workmanship. He battles the flames aiding Fire Chief 'O'Hallorhan' (Steve McQueen) to save the day with 'less than 200 body-count'. A stellar line-up of Hollywood's biggest names of the time included Fred Astaire, Richard Chamberlain, Faye Dunaway, William Holden, Robert Vaughn and Robert Wagner. One of the young firemen in the film was played by Newman's only son Scott, who was then aged 24.

The Color of Money won Newman a 'Best Actor' Oscar in 1987. In it he reprised the role of 'Fast Eddie' Felson. Characters Newman has played, including Judge Roy Bean and 'Cool Hand' Luke, have inspired a generation of guys and achieved cult status.

Road to Perdition was directed by Sam Mendes who specifically asked for Newman to star as gangster John Rooney, the father/nemesis of a hitman played by Jude Law. The 2002 film earned Newman another Oscar nomination.

There is an old Chinese proverb: To outlive one's children is a curse of the gods. Scott, Newman's son with Jackie Witte, died of a drug and alcohol overdose in 1978. He was 28 years old. Newman never forgave himself for what he termed 'paternal irresponsibility' – at the time of Scott's death the pair were estranged. Newman admits he had his own issues with alcohol abuse and addicts rarely see beyond their own problems. The grieving father founded the Scott Newman Centre in 1980, a non-profit organisation which is 'dedicated to the prevention of substance abuse through education'.

Newman enjoyed cooking, and created his own sauces and salad dressing. He got the idea to market them using his name and image to raise funds for his charity the Hole-In-The-Wall Foundation, named after the gang in Butch Cassidy and the Sundance Kid. The venture, Newman's Own, was an immediate success. Since the Hole-In-The-Wall Foundation, which was co-founded with his friend AE Hotchner, was established in 1982, over $200m has been raised to help provide camps for critically-ill children among many other projects. Newman also likes to put in an appearance at events his charity funds for organisations which help entertain sick and disabled children. He appeared as a clown called Butch Bolognese at Zippo's Circus in London, when he allowed a bucket of spaghetti to be poured over his head and sat in a cream pie. For his entrepreneurial charity work, Newman was presented with the Jean Hersholt Humanitarian Award from the Academy of Motion Picture Arts and Sciences.

Newman won an Academy Award (Oscar) for The Color of Money, Best Actor for The Long Hot Summer at Cannes Film Festival, a BAFTA, and six Golden Globes for his film work. His most treasured award was the humanitarian one.

Newman and Joanne Woodward have three daughters, Elinor (Nell), Melissa (Lissy) and Claire (Clea). On 29 January, 2008, the Newmans celebrated their golden wedding anniversary, an almost-unheard of celebration in Hollywood.

In May 2008 Newman withdrew from directing Of Mice and Men, sparking rumours about the condition of his health. Continuing his reputation as an intensely private man, Newman kept the state of his health a closely guarded secret. However, news emerged from family friend and business partner AE Hotchner that former chain smoker Newman was suffering from lung cancer. Newman then issued a statement through a spokesperson saying that he was 'doing nicely'. When he finished chemotherapy treatment a 'close family friend' was quoted saying that Newman had 'discharged himself from hospital and gone home to die' because medical science could do no more for him. The story reverberated around the world, distressing his many fans, compounded no doubt by news that Newman had given his beloved Ferrari, which displays his personal racing number 82, to a friend.

Paul Newman passed away on Friday, 26 September, 2008. Adhering to his wishes, he was cremated in a private ceremony on 30 September after which his family and friends shared a memorial meal at his restaurant, The Dressing Room.

It's been a privilege to be here.
– Paul Newman

1In mid-2007 Newman announced that he was donating $10million to this college to fund up to 20 students per year, who will be known as Newman's Own scholars.