'Monsters, Inc.' - the Film Content from the guide to life, the universe and everything 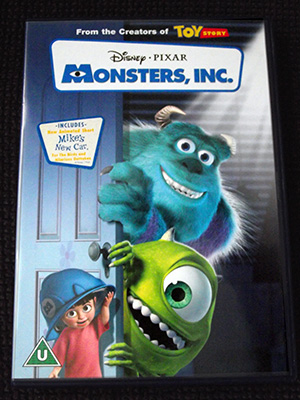 Monsters, Inc. is a computer animated film produced by Pixar in partnership with Disney. It was released in 2001, although the idea for the story originated in 1994. When Pixar's 'Brain Trust' of experienced filmmakers was thinking of ideas for their next films after Toy Story, Pete Docter proposed a film about monsters, as he felt that would appeal to children's understanding of the world in the same way that Toy Story was doing.

The film cost about $115 million to make and grossed over $570 million in cinemas worldwide, making it a big success. It was the most successful animated film of 2001 and at the time became the second most successful animated film ever, after The Lion King. Monsters, Inc. was directed by Pete Docter with Lee Unkrich (a fellow Brain Trust member who had co-directed Toy Story 2) and David Silverman (who was also credited as providing additional story material).

In the film, Monsters, Inc. is a company providing power to the city of Monstropolis. Monsters who work at the company are tasked with visiting children's bedrooms at night - the monsters scare the children and the power in the children's screams is collected. This task is fraught with danger, though, because the monsters believe children are toxic. James P Sullivan, known as Sulley, is the current best scarer. He is aided by Mike Wazowski, who sets up the doors into the human world. All is not well in the company, as children aren't as scared of monsters as they used to be, but things get worse when a child inadvertently enters Monstropolis with Sulley. Can Mike and Sulley put things right before it's too late?

James P 'Sulley' Sullivan is voiced by John Goodman, who was perhaps best known for playing Fred Flintstone in the 1994 live action version of The Flintstones, as well as his role as Dan in the TV series Roseanne. Sulley is a furry blue monster with purple spots.

Mike Wazowski is voiced by Billy Crystal, of When Harry Met Sally fame. Mike is a round green monster with one eye.

The child, nicknamed Boo, is voiced by Mary Gibbs, who was four years old in 2001. Boo is a curious child who takes a liking to Sulley. She laughs more often than she screams.

Randall Boggs has eight legs and the ability to blend into the background like a chameleon. He wants to take the title of Top Scarer from Sulley. He is played by Steve Buscemi, who was well known for roles including Mr Pink in Reservoir Dogs before lending his voice to this film.

The owner of Monsters, Inc., Henry J Waternoose III, has six crab-like legs, two arms and five eyes. The company was founded by his grandfather, but it is now struggling to collect the monthly quota of screams, so he is considering extreme lengths to save the business. James Coburn, the veteran actor known for Westerns including The Magnificent Seven, provided his voice.

The film is rated U (suitable for all) in the UK, as there is plenty for children to enjoy, with its bright colouring and funny scenes. The monsters are scary at times, though, so the rating recommends that on first viewing an adult should watch it with a child. Adults will also find plenty to enjoy in the film. There is mention of monsters who have been banished from Monstropolis including the Loch Ness Monster and the Abominable Snowman1, and the restaurant that features in the film is named Harryhausens, after Ray Harryhausen, the special effects pioneer. The setup of monsters scaring children just being a 9-5 day job is something that adults can recognise. The action scenes are cleverly done, too - for example, when a child's sock is discovered in Monstropolis, the Child Detection Agency moves in and sets up a controlled explosion.

The humour in the film ranges from visual gags that children would understand to comedy that would be appreciated more by adults. For example Mike tries stand up comedy, but gets more laughs from falling over and burping than he does from telling jokes. In the locker room, monsters put 'odorant' on, and Mike chooses 'Wet Dog' scent before he goes on a date.

The animation displays excellent attention to detail. Sulley's fur is well depicted and the monsters' facial expressions are emotive too. There are various Pixar inside references to look out for - eg Boo has several toys in her bedroom including Jessie from Toy Story 2 and Nemo from Finding Nemo.

The music was composed by Randy Newman and included the songs 'If I Didn't Have You' and the catchily-titled 'Put that thing back where it came from, or so help me'.

Monsters, Inc. was first released on DVD in 2002 and there have been other editions since, including a two-disc set with the prequel Monsters University. Extras include deleted scenes, the outtakes that were included in the film's closing credits, three short films, and Boo's Door Game, where you have to find the pieces of Boo's door that have been hidden behind everyday objects in bedrooms.

The Monsters, Inc. Scare Island game for PlayStation 2 was released in 2002. The game includes puzzles and mini games as well as the main theme of Mike and Sulley training for their jobs at Monsters, Inc. Monsters Inc. Scream Arena for GameCube requires Mike and Sulley to entertain children by playing dodgeball. Both games feature the voice actors from the movie.

No monsters were harmed in the making of this motion picture.
- End Credits

1There's even a blink-and-you'll-miss-it visual innuendo when the Abominable Snowman suspects Sulley might be gay.