Brading Roman Villa, Isle of Wight, UK Content from the guide to life, the universe and everything 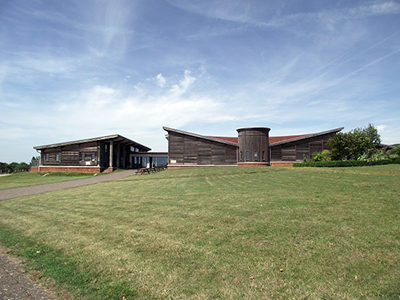 Brading Roman Villa is a tourist attraction on the Isle of Wight centred on the remains of a rich merchant family's dwelling. There has been a museum on the site since 1881 and the current museum and visitor centre building opened in 2004.

The land on which Brading Roman Villa was built occupied a prime site with good soil for farming, a supply of fresh water, and close proximity to the sea. Humans had been living there for thousands of years and the archaeological evidence indicates that the Romans moved in from 43 AD when the Emperor Claudius' military campaign to conquer Britain was successful1. Several villas were constructed around the Island, including one at Newport that is also open to visitors.

At Brading, a number of buildings were established. These included an aisled hall that was demolished in the 2nd Century, a bath house, and a larger aisled hall containing rooms with painted walls plus hypocaust underfloor heating system as well as communal space. The villa that is the focus of the museum was built around the turn of the 4th Century, facing East at right angles to the large aisled hall. The owner's name is unknown, but it is clear that the family was wealthy as the villa was decorated in fine style, with mosaic floors of impressive quality. It is likely that the owner was a merchant, because of the range of types of pottery found at the site. There are examples of the dark grey Vectis ware that was made on the Island. Numerous red Samian ware items from Europe were found, as well as the black Rhenish ware. Pottery would have been able to be transported relatively easily from across the Channel to the Island rather than via the mainland, and could then be sold on from there. In the villa's heyday the sea flowed round to Brading so it was a key port – Brading Haven eventually silted up and there is now marshland between Brading and Bembridge.

With the decline of the Roman Empire in the 4th Century, the villa fell into ruin. For a time it was used as a barn, and an oven was built inside it. It was thought that a fire destroyed it, but 21st Century research indicated that the evidence of fire was less significant - the heavy roof may have simply fallen in when the walls could no longer support such weight after the building became derelict. Eventually, soil and vegetation hid the remains of the villa from view.

In the 19th Century the land was part of a farm, and sheep grazed the grass that grew there. Pieces of Roman pottery and tesserae2 had been unearthed from time to time, but it was in 1879 that Captain Thorpe, an amateur archaeologist, met Mr Munns the farmer and started excavating the site. Professional archaeologists Price & Price were hired to continue the excavations in 1880-81 and they published their discoveries as a report. To preserve the heritage, wooden sheds were erected over the remains in 1881 and Lady Louisa Oglander purchased the land. The Oglander Roman Trust was established to manage the site, and the villa was opened to visitors.

In 1909 a corrugated iron building replaced the wooden sheds. While it was robust, it was not the best structure to protect the villa. The building rested on the remains of the villa's walls, which was causing damage over time. In the 1980s condensation inside the building caused the material under the mosaics to shift, disturbing the patterns. The mosaics were carefully re-laid, but further damage occurred in 1994 when the site flooded. Plans started to be made to find a way to protect the villa better.

Thanks to fundraising and a grant of over £2 million from the Heritage Lottery Fund, a massive programme of refurbishment took place in 2004. The old cover building was removed, the damage to the mosaics was repaired, and a high-tech new building was erected. The museum building contains a dome situated to one side of the villa's remains. The roof and walls of the building are all suspended from beams attached to the dome, rather than placing any weight on the villa's structure. The museum section is also climate-controlled to help prevent future destabilisation of the remains. To ensure the building blends in with the landscape - an Area of Outstanding Natural Beauty - it has a 'green roof' covered with low growing plants that need little maintenance and rely only on sunshine and rainfall.

Sir Barry Cunliffe, Emeritus Professor of European Archaeology at Oxford University, was recruited by the Oglander Roman Trust and the Friends of Brading Roman Villa to carry out further excavations during 2008-10. His work added depth to the work done by the Victorian team, finding new evidence and enabling existing evidence to be reconsidered. In particular new technology and techniques enabled all the buildings that had been on the site to be mapped out, and information about the Villa's farm produce was able to be gleaned. For example, evidence of wheat, barley and oats was found, as well as of cows, sheep, goats and pigs. Plenty of shells from seafood had been found, along with evidence of food preservation.

A number of fine mosaics have survived in Brading Roman Villa. They are important to modern historians as they play a role in increasing our understanding of Roman myths and legends as well as providing information about Romano-British lifestyles. 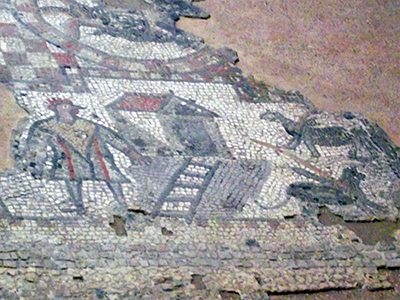 The most intriguing mosaic is the one that was found by Mr Munns and Captain Thorpe in 1879. It depicts a 'cockheaded man', with a cockerel's head and the body of a lanista or venator (someone who worked with gladiators or wild animals, respectively, for fights in amphitheatres). No other cockheaded men are known in mosaics across the Roman world, so its significance has been debated. It could be a cartoon making fun of Emperor Gallus3, whose name translated as 'cockerel'. He was known for enjoying events in the amphitheatre, and was said to have arranged for fights to be rigged so as to maximise the bloodshed. However, another theory suggests the mosaic may have had some religious significance, as an impressively large cockerel was buried outside the villa. The actual reason why the owner selected such a design to decorate part of his house with is lost in the mists of time.

Another unusual mosaic is one depicting an astronomer with a star globe and two sundials. It occupies a central position in the Audience Chamber that was decorated in the mid-4th Century. A number of panels in the mosaics on either side of the astronomer link in with the astronomical theme, as various myths and legends described how the constellations were formed. Orion the hunter appears, as do Perseus and Andromeda. Some panels in the mosaics have been destroyed, but it is likely that they would similarly depict other constellations. Orpheus the poet and musician appears with his lyre in the room that was the entrance to the villa until the Audience Chamber was ready.

The head of Medusa, the snake-haired woman whose eyes could turn people to stone but who was killed by Perseus, occupies the central panel of the finest mosaic in the villa. Around her, there are depictions of legendary people including Ceres, the goddess of agriculture, and Attis, a god of fertility with his Phrygian Cap. The Four Winds and the Four Seasons also appear, adding to the theme of Nature.

The bright and accessible visitor centre adjoins the museum building. It contains the visitor reception and a small shop selling souvenirs, books, local art and produce plus replica Roman items. The Forum Café, selling a range of hot and cold food and drinks, including the Roman-style Tabula Convivia sharing platter, is also a part of the visitor centre, and it leads into the Garfield Weston room. This room contains a library of Roman research books and can be hired for functions and events.

The museum and visitor centre is open all year round. There is a charge to enter the site, but concessions and family tickets are available.

Visitors enter the museum building through a set of sliding doors. At the start there is a plan of the site, and a display board with information about the villa. A volunteer or two may also be sitting in this area, and they will be happy to answer any questions. Wooden ramps and walkways lead people around each room of the villa and provide good views of the mosaics and other artefacts.

Display cases around the room contain objects such as pottery, jewellery and coins that were found on the site. The cases also contain display screens showing videos and slideshows of images from the excavations that took place. There are also activities for children, such as brass-rubbing, mosaic-designing and toys to play with. There is a small room where temporary exhibitions are shown - for example in summer 2017 there was a display commemorating the Great Fire of London.

Outside the museum building, the remains of the older Roman buildings have been marked out amongst the grass. Display boards describe what was once there. There is a Roman Garden growing plants that would have been familiar to the villa's inhabitants, and also a wildflower meadow where visitors can spot plants such as sorrel and orchids.

1The Isle of Wight was conquered by the 2nd Legion, under the command of Vespasian who went on to become Emperor of Rome in 69-79 AD.2Small pieces of stone or ceramic that were used to make mosaics.3 Gallus (206-253 AD) was Roman Emperor from 251 to 253 AD. He is sometimes referred to as Trebonianus Gallus to avoid confusion with Constantius Gallus, who was Cæsar (sub-emperor) of the Roman Empire from 351 to 354 AD.