Yarn Bombing the Revolution: Tricoteuses and Phrygian Caps Content from the guide to life, the universe and everything 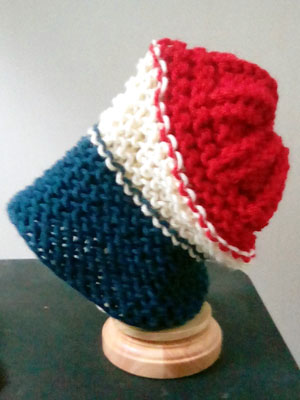 What is the connection between textiles and revolution? On the one hand, we think of the Luddite revolts in the early 19th Century – smashing automated knitting machinery struck a blow against outsourcing jobs to unskilled labour. On the other, we think of today's strategic yarn bombing extravaganzas as an exuberant way to express a political opinion while using up all those yarn scraps in the knitting basket. Unlike the Luddites, yarn bombers aren't usually worried about mass production. Instead, the bombers – the Seattle group call themselves 'hardcore chicks with sharp sticks' – use a homely, familiar craft to make a political point. They cover tanks, annoying statuary, buses, bridges, whatever takes their fancy. There's lots of ninja knitting going on around International Yarn Bombing Day (11 June – check with Facebook).

Although not all yarn bombers are women, some feminists have characterised yarn bombing as 'craftivism', a form of social action that simultaneously reclaims traditional skills and revives the idea of 'process' so often lost in the postindustrial world. Like the artist who yarn bombed the Rocky Balboa statue in Philadelphia, they may also be trying to redress the gender balance of populism to remind the public that it isn't all about machismo.

And when they do, these practitioners of 'grandma graffiti' are following in the footsteps of legendary craftivists of yore. We refer, of course, to the tricoteuses of the French Revolution – the original 'chicks with sharp sticks'.

What was a Tricoteuse, and Why Didn't She Stay at Home?

...there are Citoyennes too, thick crowded in the galleries here. Citoyennes who bring their seam with them, or their knitting-needles; and shriek or knit as the case needs; famed Tricoteuses, Patriot Knitters...
– Thomas Carlyle, The French Revolution: A History, Chapter 3.2.V, 'Stretching of Formulas'

The tricoteuse was, as the name indicates in French, a woman who knitted. But why were these women knitters mentioned in Carlyle's history of the French Revolution? One reason was that then, as too often now, the revolution was largely considered a male affair. What was Robespierre fighting for? Universal adult male suffrage. No mention of women there. So to get into the galleries and observe the proceedings of the new French government – of the people, as long as they were men   – the women needed to make themselves useful. They brought their knitting along. Knitting women couldn't be up to much, right? So they let them sit there, and at the foot of the guillotine, too.

Why knitting? It's a portable industry. All you need is two needles and a pocket or bag for your yarn. And you can be part of history, too.

Do We Know Any Tricoteuses?

The second tumbril empties and moves on; the third comes up. Crash! – And the knitting-women, never faltering or pausing in their Work, count Two.
– Charles Dickens, A Tale of Two Cities, Book Three, Chapter XV

The most famous tricoteuse is pure fiction, dreamt up by Charles Dickens for his novel A Tale of Two Cities. Madame Defarge is the archetype of vengeful womanhood. She and her friends are chicks with sharp sticks who have a lot to be angry about. Madame Defarge's family members were killed by aristocrats. It's pretty clear that Dickens, who wasn't born back then, got his idea about the knitting women from his reading of histories like Thomas Carlyle's.

What Dickens didn't get from Carlyle was the idea that Madame Defarge knitted in code. The knitted register of crimes against humanity used by the revolutionaries in A Tale of Two Cities was Dickens' own invention. He might have got the idea from talking to his good friends Charles Babbage and Ada Lovelace, those early computer scientists. Dickens was a clever man and a quick study.

There is no evidence that the Madame Defarge knitting cipher was ever used, although there are unconfirmed Internet rumours1 that elderly Belgian women used a knitting code to record German troop movements in either World War I or World War II (depending on the unconfirmed source).

A real-life tricoteuse of the Revolution was Aspasie Carlemigelli, who had a hard life and died on the guillotine at 23. Aspasie is more typical of these French Revolutionary women than Madame Defarge. She was abused by her parents, thrown out on the streets as a small child and left to fend for herself, and spent some time in an insane asylum. As a member of the informal tricoteuse movement, Aspasie took part in bread riots against the unstable new government. She also wanted to avenge the death of Robespierre, whom these women saw as a champion of their rights. Her activism, and that of other tricoteuses, led to arrests by the Revolutionary government, and the banning of the women from meetings of the Convention2.

The tricoteuses were poor working-class women (who else would knit socks and scarves for a living?), like their male counterparts, the sans-culottes, so-called because they wore low-class trousers rather than high-class silk knee breeches. Both tricoteuses and sans-culottes, however, shared an item of clothing: the Revolutionary hat known as the Phrygian Cap, the Liberty Cap, or to modern children as the Smurf Hat.

Where do Phrygians Come From, and Why do They Wear Smurf Hats?

Phrygians were people who lived in Anatolia (part of modern-day Turkey) quite a long time ago. They had a reputable kingdom in the 8th-7th Centuries BCE. We wouldn't be interested in them except for the fact that the Phrygians were famous for wearing conical caps with the point of the cone pulled forward. And yes, these caps looked just like Smurf hats.

Somehow, people in western Europe and North America in the 18th Century got this Phrygian Cap confused with the pileus, a felt cap worn by freed slaves in ancient Rome. So the Phrygian Cap became the 'liberty cap', a symbol of the freedom movements of the late 18th Century. It was usually red.

When the American and French revolutions broke out, liberty caps were very popular. Marianne, the symbol of France, wears a liberty cap. Columbia, the allegorical 'gem of the ocean' in the United States, wears... you guessed it. The Phrygian Cap can be found on the Seal of the US Senate, and on other symbols around the world. Even today, protestors may stick it up on a Liberty Pole. (Liberty Poles are making a comeback.)

Both women and men wore liberty caps during the French Revolution. French patriots wear them today. They show up on the heads of people who support both more and arguably less freedom, with different positions along the French political spectrum. In the fictional realm, of course, Papa Smurf wears a red Phrygian Cap. Perhaps he symbolises liberty for the freedom-loving Belgians.

Can I Wear a Phrygian Cap Without Being Arrested?

Of course you can. This form of headgear is not known to be outlawed anywhere, and can actually be spotted in parades. The best way to obtain a Phrygian Cap for revolutionary purposes (or to celebrate Bastille Day in Philadelphia) is to knit your own. Experienced knitters may find this set of revolutionary instructions useful. Another set of instructions can be found here, courtesy of Ravelry.

Or you could find yourself a tricoteuse, negotiate a hat, and join the plans for your next yarn bombing adventure. Vive la Revolution!

1An Internet rumour is a phenomenon in which one computer user makes an unsubstantiated claim, and thousands of other users spread this claim on blogs and social media without checking the source, simply because the story is interesting or 'sounds about right'.2John Goldworth Alger, Glimpses of the French Revolution, London, 1894, p.155.