Ada Lovelace - Mathematician and Computer Scientist Content from the guide to life, the universe and everything 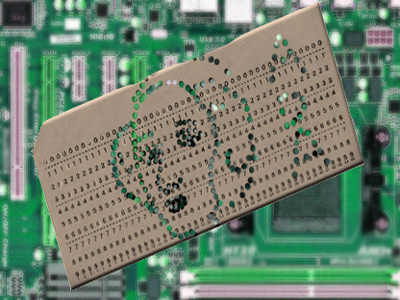 Ada Lovelace was a mathematician and scientist who was particularly famous for her work with Charles Babbage and her notes about the machine he designed (but never built) that came to be known as the first computer.

The notorious Lord Byron was Ada's father, and her mother was Annabella Milbanke, a rich heiress who had such an interest in mathematics her husband Byron nicknamed her 'The Princess of Parallelograms'.

Augusta Ada Byron was born on 10 December, 1815, and her mother left Byron soon after. Not wanting her daughter to grow up to be an artistic eccentric like Byron, Annabella encouraged Ada to take an interest in science and mathematics rather than poetry and literature. Ada was mainly looked after by her grandmother, although her mother did take her on a holiday in 1826. They travelled through Switzerland, Germany, Italy and France, returning to England in 1827.

In 1829, Ada became very ill, becoming almost blind and unable to stand up following a bout of measles. She had been tutored at home from an early age, and when she started recovering from the illness in 1830 her education continued in earnest. At first she used a wheelchair, then spent some time walking with crutches, but was able to walk unaided again by the time she was 16. William Frend, who had taught mathematics to Annabella, was one of her tutors. Later she took lessons with the mathematician Mary Somerville1 and Augustus de Morgan, professor of mathematics in London2.

Ada was a minor celebrity, since many people recognised her as Byron's daughter, immortalised in his poem Childe Harolde as 'Ada! Sole child of my house and heart'. Hence, even though her mother was separated from her father, she was accepted into society when she was 16 and met many intelligent people. Charles Babbage was one such acquaintance; he was also a friend of Mary Somerville. Ada visited his house when she was 17, to see the model of the Difference Engine that he was building with the aim of calculating the most accurate log tables and navigational tables ever seen. He never finished the Difference Engine itself3, but the model was able to carry out simple calculations, such as generating a sequence of square numbers, or creating a sequence 2, 4, 6, 8 that then skipped to 117 before continuing as 119, 121, 123. Fascinated by his work, Ada started a correspondence with him about mathematics and related subjects.

At the age of 19 Ada married William King, a man ten years her senior. Her husband inherited a title in 1838, making him the Earl of Lovelace and she became the Countess of Lovelace. The couple had three children; the eldest, Byron, was born in 1836. Their middle child, born in 1837, was a girl who later became Lady Anne Blunt. She was known for horse breeding and a translation, along with her husband Wilfrid Scawen Blunt, of The Muallaqa of Imru al Qays. The youngest child Ralph Gordon was born in 1839.

William encouraged his wife to continue her mathematical studies and work with well known academics, but she also enjoyed other less noble pursuits, in particular taking part (and losing) in gambling, and socialising with men. Her health was not very good, as she contracted a bout of cholera soon after her daughter was born, and often experienced 'nervous attacks' and stomach pain, for which she was prescribed laudanum by her doctors. The drug may have contributed to her experiencing mood swings and generally feeling like an 'odd animal' as she struggled to master her emotions, become an intellectual and find suitable outlets for the thoughts and feelings that filled her mind.

From about 1845, she began to feel better, both physically and emotionally, and stopped taking laudanum. She continued her scientific work, went travelling with her husband, and also spent more time with her children. However, she experienced more illness from 1848 and started taking laudanum again. In 1852, she became seriously ill, and her mother took control of the situation. Annabella prevented Ada's friends from visiting (although Charles Dickens was allowed in to read to Ada on one occasion), ensured she confessed all her sins, and managed her affairs. Ada's children visited occasionally, but were not there at the end.

Ada died of cancer of the uterus on 27 November, 1852, at the age of 364. Even though she never really knew her father, as she was so young when Byron separated from Annabella, she had become familiar with his poetry and had a portrait of him. She asked to be buried in the family vault in Nottingham, where Byron also lay.

During her lifetime Ada enjoyed music and art, but she did take to science and mathematics, as her mother hoped she would. Some of her earliest investigations were about flying - when she was 13 years old, she made a study of birds' wings and contemplated ways to enable humans to fly too, such as via the construction of a steam-powered mechanical winged horse. Later in her life, she considered the brain and nervous system, electricity and magnetism, and corresponded with the scientist Michael Faraday. She also took a great interest in the clockwork automata and other machines that had been invented for entertainment and manufacturing during what came to be known as the Industrial Revolution. For example, she investigated Jacquard weaving looms and saw the dancing Silver Lady automaton5 that Charles Babbage had bought and showed off at his home.

The work she is most well known for, however, is in relation to her correspondence with Charles Babbage. In 1840, Charles visited Italy to give presentations on the new machine he had invented, called the Analytical Engine, in the hope that people would invest in his plans and give him enough money to build it. Unlike the Difference Engine, which could only carry out computations that could be expressed in terms of addition and subtraction, the Analytical Engine had the potential to carry out many other mathematical functions. Luigi Menabrea took notes at one of the presentations, and wrote them up for publication in French. As Ada had studied the diagrams of the Difference Engine and discussed it with Charles, she was considered by the editor of a scientific journal to be the ideal candidate to translate the Menabrea notes into English. After she eagerly did so, Charles recommended that she could add some of her own thoughts, as it was 'a subject with which she was so intimately acquainted'.

In 1843, Ada started work annotating the translation. In particular she added Notes A to G at the end of the paper, which discussed the Analytical Engine and its properties in more detail than Menabrea had considered. Like Jacquard weaving looms, the Analytical Engine was planned to run off cards with holes punched into them at specific points, enabling much more variety of computation to take place compared with simply having a calculation method built into the machine itself.

Note A describes the principles behind the way the Analytical Engine would operate and also speculates on how widely the Engine could be applied - in particular, it is noted that computations could be performed on objects other than numbers, including expressions in algebra and imaginary numbers. She foresaw that the machine could even be used to compose music if appropriate functions on musical notes could be determined.

Note B considers in more detail how the Analytical Engine would work. It indicated how values would be input and how operations would act on successive pairs of values in accordance with the instructions on the punched cards. The result would be printed out when all operations were completed. Note C considers the Jacquard loom and how the number of cards required to create a pattern could be reduced by taking advantage of symmetries and repeating sections - the cards that carry out such operations could be reused in the process every time they were required, rather than having a new card for each instance of an operation. Note F also considers methods for reducing the number of cards required in operations that could be performed by the Analytical Engine.

Note G considers the Bernoulli Numbers, which were mentioned in Menabrea's text as useful in various other calculations. The Numbers can be generated by an iterative process, meaning that the second Bernoulli Number is calculated from the first, and the ninth is calculated from the previous eight, and so on. The cards that would have been needed by the Analytical Engine to carry out the stages in the computation of the numbers are described by Ada in Note G. Hence she is credited with being the first computer programmer.

Later readers had some doubt about Ada's contribution to the subject, as they knew she worked closely with Charles Babbage on the paper and he had suggested some lines of enquiry that she could pursue when adding annotations. He also did some working out for her in relation to the Bernoulli Numbers. However, their letters show that Ada contributed to the discussions, and indeed she spotted an error in his calculations when she was developing Note G. Hence her role in computer programming is still recognised.

Ada's name lives on today, as she was a pioneer in the subject of Computer Science, and was also a pioneer in relation to the education she obtained, which was unusual for women at the time6.

1After whom Somerville College Oxford was named.2Known especially for de Morgan's Laws in mathematical logic.3His plans were used to build a fully working machine in 1991 to celebrate his 200th birthday.4Her father Byron was also 36 when he died.5A 12"-tall model of a woman holding a bird - when the clockwork mechanism was activated, the woman danced and the bird flapped its wings.6Even Ada's tutor de Morgan worried that advanced mathematical problems were 'beyond the strength of a woman's physical power of application'.