Slide Rules - a History and How To Guide Content from the guide to life, the universe and everything 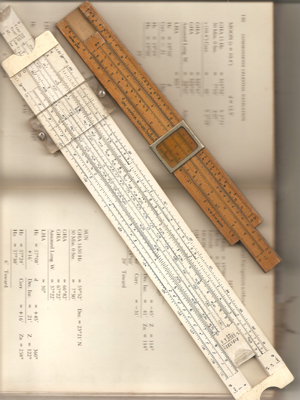 A slide rule (sometimes known as a slipstick in the US) is a mechanical device for multiplication and division. Engineers and scientists often have to multiply and divide many numbers - since the traditional paper-and-pen method of multiplication is tedious in the extreme, the slide rule was invented to allow a quick, although not very accurate, multiplication or division to be carried out. There was a time when every engineer would carry a slide rule around with him, but all that changed in the late 1970s with the invention of the scientific pocket calculator. Slide rules became a part of history.

This Entry looks at the slide rule, and explains how it works by giving instructions on how to make one. It also gives details of some more complicated slide rules that were designed and built.

The slide rule consists of a fixed part and a sliding part. The fixed part is called the body or stock, and it normally has a narrow slot in it - the sliding part, called the slide, fits into the slot in the stock with a tongue and groove arrangement so that it can slide along but won't fall out. Each part has a scale marked on it numbered from 1 to 10, with various other numbers marked in between. Multiplication is done by positioning the 1 of the sliding scale opposite the first number to be multiplied on the fixed scale. The second number in the multiplication is then located on the sliding scale and the corresponding number on the fixed scale gives the product (multiplication) of the two numbers.

How to Build a Slide Rule from Paper

To understand how this works, it is best to make yourself a slide rule out of paper. This will be done in three easy steps.

How A Normal Ruler Can Do Addition

Using a normal ruler, draw a line on a piece of paper and place marks on it every centimetre. Number these from the left, 0, 1, 2 etc up to about 10. Now, to add 2 and 3, place the 0 point of the ruler at 2 and look what's on the paper opposite the 3 point on the ruler. It is 5. The addition has been performed.

What you're doing is adding lengths together. The lengths are 'analogues' of the numbers you want to add, so this is technically an analogue computer.

A slide rule uses the same principal combined with a little mathematical wizardry to do multiplication. To demonstrate this, we're going to need two sheets of paper. On one sheet, draw a line and mark off the centimetres as before, but this time number them 1, 2, 4, 8, 16 and so on. This is the fixed scale. Now draw an identical scale along the top edge of the second piece of paper; this is the sliding scale.

What's actually happened here is that you have used the paper scales to add the logarithm of 4 to the logarithm of 8 and read the result off as the logarithm of 32, but you've labelled the three numbers as 4, 8 and 32. Don't worry if you don't understand what this means; you can use a slide rule without ever knowing about logarithms.

Of course, this system is only good for multiplying the numbers that are on the scale. But the same principle can be applied to other numbers as well. The scale we've used in the second step is based on powers of 2, but a scale of the numbers between 1 and 10 can be devised which does the same thing. Let's assume that we want the scale to be 250mm long (10 inches). This is a convenient size, and is the standard size for a normal slide rule. Using your ruler, draw a line on one sheet of paper and put marks along it as in the following table. Make sure to write your numbers above the line rather than below it. This line forms your fixed scale:

Repeat the process putting your marks along the top edge of a second piece of paper. Write the numbers below these marks. This is your sliding scale.

You now have a slide rule that can multiply simple numbers. Say you want to multiply 1.7 by 2.6:

If the result is off the scale, just look at the 10 instead of the 1.

If you want to do a number of multiplications or divisions in a row, for example multiplying 1.1 by 2.3 by 4.7, you need some way of storing an intermediate result. For this you use the cursor.

This is a transparent plastic or glass component that slides along the slide rule and has a single vertical line known as a 'hairline' engraved on it. You can position the line at the result and then slide the moving scale so that 1 is now at this line. The word 'cursor' means 'runner' in Latin, and it is called this because it can run along the rule1. On your paper slide rule, you can duplicate the action of the cursor by just putting a red biro mark where it would be.

With practice, an operator can multiply a string of numbers at a rate of about one per second, which would be difficult to achieve on a pocket calculator.

The basic slide rule needs just two scales, the sliding and the fixed, which for historical reasons are known as the C and D scales. The simplest mechanical construction for a real rule is a sliding part between two fixed parts. This means that there are four scales:

The C and D scales, as described above, go from 1 to 10. The A and B scales normally go from 1 to 10 in half the length of the scale, and then repeat again from 1 to 10 in the second half of the scale, although these may be marked 10 to 100. This means that each number on A corresponds to the square of the corresponding number on D, while the numbers on B are the squares of the numbers on C. You can square any number by just jumping across from the normal fixed scale to the corresponding position on the squared scale. You just read off the number. The cursor can be used to do this.

In a similar way, cubes, log scales, sine, cosine and tangents can all be provided on the slide rule.

So What About Addition and Subtraction

Slide rules don't do addition or subtraction. Engineers would do these on paper. In fact, most engineering problems don't require a huge amount of addition and subtraction. Multiplication and division are much more common.

The paper rule we built earlier is not very precise, as we've only put a few marks on it. Like a measuring ruler, a real-life slide rule will have many marks, so that numbers can be read off to 2 or 3 significant figures. If you want any more accuracy than that, there are two approaches:

The circular slide rule has the scale in a circle rather than a straight line. One advantage is that you never get a result that is off the scale. On the other hand, the cursor is implemented using a glass 'hand' like the hand of a clock, with the hairline engraved on it, and can be somewhat cumbersome. Circular rules tend to be slower than the straight ones but can take up less space.

Cylindrical slide rules use a helical scale wrapped around a cylinder as one of the two scales and a straight scale for the other one. They can achieve great accuracy but are bulky, slow and fiddly to use.

Logarithms, the mathematical functions on which the slide rule is based, were invented by a few different people at about the same time, but the one who is important to us is John Napier (1550 - 1617). He came up with the idea in 1614 and developed a way of doing multiplication using addition by looking up numbers in tables of logs and antilogs.

In 1620, Edmund Gunter, Professor of Astronomy in Gresham College, London, worked out a way of multiplying numbers using an engraved logarithmic scale. He used dividers to transfer numbers from one part of the scale to another.

The Reverend William Oughtred (1574 - 1660) designed the first device that could be described as a slide rule in about 1630. He used a circular scale, with two cursor hands which could be set at a particular angular separation, then rotated together to give the equivalent of a sliding scale. The first model was built by Elias Allen (1580 - 1683) in a workshop near the church of St Clements in the Strand, London. Oughtred is also credited with inventing the abbreviations sin and cos for sine and cosine, and with the '×' multiplication symbol.

Seth Partridge produced the first straight slide rule with a fixed stock and moving slide in 1657.

John Robertson is credited with the addition of the cursor, in 1775.

After that, there was a steady stream of new and more elaborate scales being added to the slide rule, but the basic design was now complete. There were also improvements to the construction materials - originally slide rules were made from wood, but wood expands and contracts depending on the humidity, so other materials were experimented with, including metal, bakelite and plastics.

Slide rules were still available and were still being improved up to the mid 1970s. They were superseded by the electronic calculator in the late 1970s. The Hewlett Packard HP-35 is generally credited with being the machine that made the slide rule obsolete.

1When computers were invented, the same word was used to represent the marker which showed where the next typed character was to appear on the screen.