Algol - the Demon Star Content from the guide to life, the universe and everything 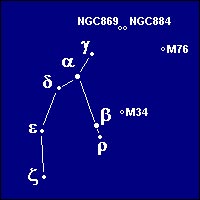 Algol, also known as beta Persei, is the second brightest star in the constellation of Perseus. It bears the unusual nickname of the Demon Star. Algol is physically an unusual star, being the second variable star to be discovered.

Perseus was a hero of Greek mythology. He fought with a hideous monster called Medusa, one of the three sisters called the Gorgons. These had the form of a woman with snakes on their heads instead of hair. They were so ugly that anyone who saw them face to face was instantly turned to stone. Perseus defeated Medusa by creeping up on her with his back turned, watching her reflection in his bronze shield. He then beheaded her with his sword. He kept the severed head in a bag and later used it to defeat a sea monster, Cetus, producing the head and using its gaze to turn the monster to stone.

The constellation of Perseus is shown in the diagram at the top of this Entry. The position of Algol is shown by the Greek letter beta (β). The constellation supposedly represents Perseus with his sword in the air and carrying the Gorgon's head. Algol is Medusa's eye. In ancient Greek the star was called Gorgona, although Ptolemy's list of stars does not give it a name, merely saying that it is part of the Gorgon's head. A thousand years later, the Arabs gave it the name Ras al Ghûl, the Head of the Ghoul, and it is from this that we get both the modern name Algol and the nickname the Demon Star.

Up to the 17th Century it was thought that the stars were constant and unchanging. Some are bright and some dim, but it was thought that each would remain at its own particular brightness for ever. Then in 1638, it was discovered that the star omicron Ceti changed brightness regularly over a period of about 11 months, sometimes quite a bright star and sometimes fading away to invisibility. Amazed by this, astronomers gave the star the Latin name 'Mira' meaning 'Amazing'. People started to look out for other variable stars and in 1669, the Italian astronomer Geminiano Montanari found that Algol varies - it is sometimes bright and sometimes slightly less bright. He didn't study it in detail, though.

John Goodricke was an Englishman who lived in the 18th Century. He had the misfortune to be completely deaf; you can read about his short, tragic life in the Entry on delta Cephei. Goodricke was interested in the stars. He carried out detailed observations of Algol and found that it varies in a very strict pattern. The star is normally of magnitude 2.1, but every 2 days, 20 hours and 49 minutes, it fades for nearly 5 hours, eventually reaching a minimum brightness of magnitude 3.4 (larger magnitude numbers indicate a dimmer star). It stays at this level for about 20 minutes, then brightens for nearly 5 hours to reach its normal magnitude again. 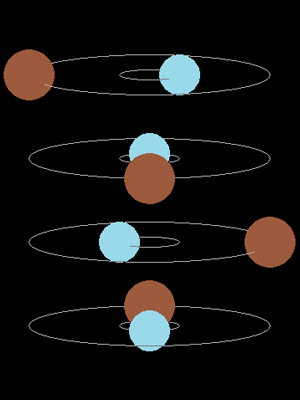 Goodricke presented these results to the Royal Society in 1783 along with a possible explanation. Many of the stars we see in the sky, when viewed through a telescope, turn out to be double ('binary') stars - two stars close together orbiting around each other. Although Algol looked to Goodricke like a single star, he proposed, correctly, that it is actually two stars, a bright one, Algol A, and a dim one, Algol B, very close together. They are so close that telescopes of the time could not separate them. The system is aligned from the viewpoint of Earth in such a way that as it goes around, the dim star goes partially in front of the bright star and blocks some of it out.

Most of the time we see the two stars, but because they are so far away they appear as a single point of light in the sky, and their light is combined. When the dim star is in front of the bright star, we see only part of the light of the bright star, so the total brightness is reduced. (It would also follow that when the bright star is in front of the dim star, the light reaching us from the dim star would be blocked slightly as well, but this would be a tiny effect and was not observable at the time.) Goodricke received a medal from the Royal Society in 1783 for his work. Algol and other similar stars are now known as 'eclipsing binaries'.

Goodricke's theory was a good explanation for the effect but it was more than a century before it was verified by other experimental data. In 1889, Hermann Carl Vogel looked at Algol using a spectroscope. This examines the colours in the starlight and can show the chemical composition of the star's outer layers, but it can also be used to measure the star's speed towards or away from the Earth due to a phenomenon called 'Doppler shift'. Vogel was able to show that Algol is regularly moving towards us then away from us, as it would if it were in an orbit around another star.

When electrical measurement of the brightness of stars became possible, it was shown that Algol does also have a small dip in brightness midway between the big dips. This is caused by the bright Algol A eclipsing the dim Algol B, again as predicted by Goodricke's theory.

Did the Ancients Know about Algol's Variability?

It would be nice to think that the ancient people who gave Algol its name knew about the variability of the star - its changes in brightness are not too hard to detect. This would give a perfect explanation of why this star was chosen from all the others in the sky as the Eye of Medusa. Unfortunately, there is no evidence that this is the case. Nobody before Montanari in 1669 ever mentioned Algol as being variable. It seems, then, that it must just be a coincidence.

In 1855, Friedrich Wilhelm Argelander of Potsdam discovered that the period of Algol's 'winking' varied by a few seconds over a period of 681 days. The explanation is a third star, Algol C, orbiting around the other two. It's not particularly close to them and does not eclipse them, but its gravity causes them to wobble slightly, creating slight variations in the period of variation of Algol. The existence of this star has since been proved by a process called speckle interferometry.

The details of the stars are as follows:

The mass, radius and luminosity are given relative to our own Sun. Some other facts about the system:

Hydrogen is the fuel that stars run on. In a car, the bigger the fuel tank, the longer the car can last before it runs out of fuel. In stars, however, the more hydrogen there is, the hotter and faster the star burns. Small stars burn slowly while big ones burn faster; their gravity is stronger, compressing the hydrogen fuel together, so that it reacts quicker. The Sun is a medium-sized star and should have a total lifetime of about ten billion years. The biggest stars burn so fast that they will last a mere 50 million years, only 0.5% of the Sun's lifetime. The very small stars known as red dwarfs burn so slowly that they'll probably last trillions of years. The universe is not old enough for any red dwarfs to have yet reached the end of their lives.

When a star has burned up all its hydrogen, it moves to the next phase of its life - it starts to burn helium and expands to be a red giant for a short while before either exploding or shrinking to become a tiny glowing ember known as a 'white dwarf'.

The two stars Algol A and Algol B must have both formed from the same dust cloud, so they should both be the same age - when a star ignites, it usually blows away the gas and dust around it, preventing any other stars from forming in the region. Studies of the colours of the two stars show that Algol A is still burning hydrogen, while Algol B has already finished its supplies of hydrogen and has already started to expand into a giant. But this means that Algol B should be bigger than Algol A, since it has burned faster. In fact, Algol B is only about one-fifth the mass of Algol A, so why has it already used up its fuel? This anomaly is known as the 'Algol Paradox'.

An explanation of the effect is that B was originally more massive than A, so it burned faster and eventually burned up all its hydrogen. Then it started to expand. But because it is so close to A, its outer layers were close enough to A to be captured by its gravity, so they were sucked into A and there was a 'mass transfer' from B to A. Algol A became more massive and B became less so, eventually reaching the current state.

It seems very appropriate that a star known as 'the Ghoul' in Arabic should be sucking the life out of its partner!

The Future of Algol

We don't know exactly what will happen to Algol in the future, because it depends on exactly how much mass there is in the two stars A and B. The following is a likely scenario:

Algol B will continue to burn helium until there is none left. It will throw off its outer shell exposing its core as a tiny glowing white sphere known as a white dwarf. This will no longer burn fuel but will continue to glow white because it is so hot.

Algol A will burn off the rest of its hydrogen and then will start to expand into a giant. But now the tables will be turned; as it grows, B will suck away its outer atmosphere and there will be a mass transfer from A back to B. When the mass of the white dwarf B reaches 1.4 times the mass of our Sun, it will undergo a massive upheaval and will explode as a 'type 1a' supernova. Not only will Algol B be destroyed, but more than likely Algol A will too.

If humans are still around on Earth when this happens, it will be quite a sight. The brightest supernova visible from Earth in the last millennium was in 1054 AD: a star 9,500 light years away from us exploded and briefly became bright enough to be visible during the daytime5. The remains of that supernova are still visible as M1, the Crab Nebula. Algol is one hundredth the distance away, so it should be correspondingly 10,000 times as bright!

1The mass and radius figures are from the SolStation.com website.2The luminosity figures are from Wikipedia.3A light year is the distance light travels in one year, roughly 5.88 trillion miles or 9.46 trillion km (9.46×1015m).4An AU (Astronomical Unit) is the distance from the Earth to the Sun, or 150 million kilometres.5This was recorded by Chinese and Japanese observers.