Lincolnshire Food Content from the guide to life, the universe and everything 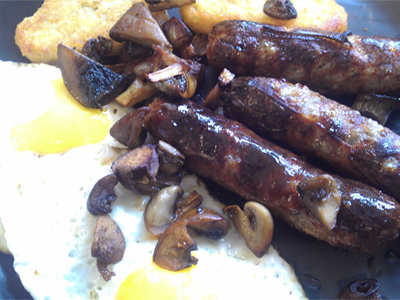 Lincolnshire in England is famous for its tasty sausages, but there are lots more local specialities. While some foods are not unique to Lincolnshire, read on and you will learn more about special Lincolnshire fare.

The apple is a versatile fruit which provides a healthy snack and one of your '5 a day' (five portions of fruit and vegetables to maintain a healthy diet) recommended in the UK. Apples have a unique history and there are plenty of stories where the fruit has featured, sometimes playing an important role. Possibly the most famous, still-living apple tree stands in the grounds of the 17th-Century Woolsthorpe Manor, near Grantham in Lincolnshire. The manor was the childhood home of Sir Isaac Newton, and that tree bore the apple which supposedly inspired him to consider the concept of gravity. Now owned by the National Trust, the living-history apple tree is protected for posterity.

Apples are grown all over the world wherever the climate is tolerable to trees. Luckily Lincolnshire's climate is neither too hot, cold, wet nor too dry and there are plenty of insects to do the job of pollination. Lincolnshire boasts many varieties of apples, originating from the county, some dating back over a thousand years. Just a taster will be listed here:

Apples aren't just eaten raw or cooked. They can be pressed to provide apple cider, the production of which pre-dates beer! Apple cider has a good concentration of antioxidants which may be helpful for preventing heart disease and cancer. Skidbrooke Cyder is locally sourced and produced, every part of the apple is used in its creation, even the pips, core and skin, so there is no waste and the fermentation is natural. No preservatives, water, sugar or yeast are added, so it is suitable for people who are diabetic and those with wheat intolerance. The Lincolnshire cider-maker's claim to fame is that Skidbrooke Cyder is exported to Somerset1. That's got to be worth a toast to Pomona, the goddess of apples!

Lincolnshire is renowned for its asparagus, which was recommended as an aphrodisiac by the herbalist Nicholas Culpeper (1616 - 1654), who prescribed it 'to be taken to stir up bodily lust'.

Cote Hill is a farm in Osgodby which has a herd of 80 pedigree Friesian cows. The cheeses the farmers create using the fresh, untreated milk are named after the farm:

Lincoln Blue is made in Market Rasen. It is a medium strength, mature blue cheese suitable for vegetarians.

Lincolnshire Poacher Cheese is an award winner the world over:

There is a smoked version, called, you've guessed it, Smoked Lincolnshire Poacher Cheese (locals call it just 'Smoked Poacher'). This variety also won a Gold Medal at the British Cheese Awards in 2003, and the title Best Flavour Added Cheese in 2009.

The latest addition to the Lincolnshire Poacher family is Lincolnshire Red; it has a delicate, nutty flavour.

Little Imp is for those who prefer a stronger-flavoured cheddar-style cheese.

Grantham is probably most famous for providing the UK with its first female Prime Minister. However, a less well-known fact is that there's a speciality, aptly named Grantham Gingerbread, which was born in the town. Its creation was serendipitous, way back in the mid-18th Century. What should have been a whetstone batch of biscuits was ruined by local baker William Egglestone3, who accidentally used incorrect ingredients for that particular recipe. However, the resultant sweetmeat, a gingerbread containing no black treacle, made such delicious biscuits that the butterfingered baker was forgiven.

Lincolnshire Haslet is a pork and onion meatloaf, flavoured with herbs. Local butchers sell their own unique recipe as a speciality sandwich filling. It goes well with cheese and pickle. Haslet is especially delicious served as the cold-cut meat in a salad, teaming up nicely with beetroot and coleslaw.

Croft Apiaries make their own Lincolnshire Creamed Honey. It has a creamy colour and texture and spreads like butter, perfect on toast.

Shaun and Heather Scargall of Grimsby are beekeepers who tend several beehives in their own back garden. In 2012 they harvested 60lbs (about 27kg) of delicious clear honey which they sell as Lincolnshire Honey at their homebrew shop on Freeman Street.

An Appleby's ice cream van sits on the car park at the Boating Lake, Cleethorpes, on most days of the year. Ignore it at your peril. Once you have sampled their wares, you will have a memory of having tasted some of the best ice cream in the world. Appleby's Farm Ices, at Conisholme, near Louth, is where the Appleby family has been manufacturing ice cream since 1913. In their parlour you can choose from their full range of iced desserts and there's a picnic area nearby to fully enjoy your treat. The Sandwich Bar in St Peter's Avenue, central Cleethorpes, has an exclusive deal to sell Appleby's ice cream, where you can choose from a variety of 28 flavours, in cones to eat there and then or tubs to take away. It can be ordered by the bucket for special occasions. The Lion's Den Café in Weelsby Woods, Grimsby, is a great pit-stop for light refreshments – tea, coffee or Appleby's ice cream!

Dennetts of Spilsby have been creating their own award-winning recipe ice cream since 1926. It is made with double cream and fresh milk sourced within Lincolnshire. They use only natural flavourings to produce new varieties as diverse as Brandy & Orange, Burnt Caramel, Coconut, Irish Cream & White Chocolate, Turkish Delight, Peanut Butter and Orange-Choc-Chip, and of course the well-established favourites such as Chocolate, Mint-Choc-Chip, Strawberry and Vanilla. At their Ice Cream Parlour in Bailgate, Lincoln, as well as their full range of ice cream you could also sample their low-fat frozen yogurts (of which Pineapple is just one) and a must-try is the sorbet selection which includes Pink Champagne. Dennetts also supply the ice cream for the Paradice Ice Cream Parlour at the Lyndhurst Garden Centre, Burgh le Marsh (near Skegness).

Willingham Fayre Ice Cream Parlour, North Willingham, near Market Rasen, sells award-winning products which have been made using only locally-sourced ingredients. Their ice cream sundaes just beg to be tasted, but how do you choose between Banana Boat, Knickerbocker Glory, Toffee Crunch or Ice Cream Floater? Oh well, that's as good an excuse as any to return another day!

Did you know that ostrich eggs take 42 days to hatch? There are ostrich farms in Lincolnshire, which breed and raise the large birds in a free range environment to Freedom Food Standards. Although classed as poultry, they provide a red meat that tastes like luscious beef. It is lower in fat and calories compared with other meats. For example, a 100g portion of ostrich meat contains 114 calories and 2g fat. A pork chop of the same weight would deliver a heftier 260 calories and 16g fat. Farm shops sell ostrich products such as feathers, oil, blown eggs (for decorating) and the fresh, unfertilised eggs during the laying season of mid-April to August. Once you've shelled out about £20 for your ostrich egg, you'd need some appetite to get through it, as they are 24-times the size of a hen's egg and weigh between 1-2kg. Those who have eaten the eggs, which are the largest of any bird species on the planet, have described them as being much the same flavour as a normal chicken's egg.

Lincolnshire Plum Bread comes in two varieties, Traditional and Luxury. Myra Pocklington created the traditional plum bread to feed workers on her family's Withern farm in the 1920s. The sliced plum bread would have lashings of home-churned butter with a chunk of cheese to top it off, and no doubt a mug of tea to wash it down. The Luxury version is the same basic recipe with the addition of cherries and a hint of spice. The bakery which produces Lincolnshire Plum Bread today is still run by the Pocklington family. Another high recommendation is the Tea Cosy Café in Caistor where you can buy it by the slice, buttered and topped with cheese if you wish.

Lincolnshire Pudding is a lighter alternative to the richer traditional Christmas pudding. The recipe can be adapted to use up leftovers, including potatoes and grated carrot.

Samphire, a Lincolnshire delicacy, is a succulent plant growing wild on marshland which has a taste best described as being like seaweed-flavoured spinach. Its other names are glasswort and St Peter's Herb. When it is in season from late July, local people head down to the marshes to pick the plants. It can be quite a family occasion, equivalent to strawberry picking. The samphire is cut with a knife or scissors with the roots left in situ so that the plant will grow again the following year. Samphire can be eaten raw, served with salad, boiled or steamed and served with butter or salt and vinegar. Although it has been nicknamed 'poor man's asparagus', it was chosen to be served at the wedding breakfast following the nuptials of the Prince and Princess of Wales in July 1981.

Lincolnshire has its own local speciality sausage, made of at least 70% pork and flavoured with sage. They are a particular favourite of Queen Elizabeth II. The Lincolnshire Sausage Association has been campaigning for Protected Geographical Indication (PGI) status for Lincolnshire Sausages since 2005. The Department for Environment, Food and Rural Affairs (DEFRA) said in 2012 that because 'Lincolnshire sausages' had been made elsewhere for more than 20 years, and with 95% of sales transacted outside the county, the Lincolnshire Sausage will not be submitted to the EU Protected Food Name Scheme as a PGI. UK foods protected by their PGI status include Kentish ale, Cornish Pasty, Traditional Cumberland Sausage, Exmoor Blue cheese, Melton Mowbray Pork Pie and Traditional Grimsby Smoked Fish.

The Olympic Torch relay team got a sizzling reception in Louth, home of the famous Lincolnshire Sausage, on 27 June 2012. Not so the Mayor, Cllr Jill Makinson-Sanders, supporting the event as a member of the community, who showed up dressed in a pink sausage costume. Someone wrote that it was 'the wurst they'd seen' and rumour spread that the Mayor had been tricked into wearing a giant penis outfit more suitable for a hen party. The media scrambled to interview her, and the resultant publicity ensured the stunt went global. There are detractors who accuse her of bringing the office of Mayor into disrepute and that by trying to upstage the historic event by promoting local produce was practically sacrilegious. Obviously they hadn't attended their own hometown Olympic Torch run-through or they'd have been given a Union Flag with a mobile phone logo on to wave and a freebie bottle of cola by the escorts, which left a bad taste in the mouth for some who believe the Olympics have already been hijacked for commercial purposes.

Another delicious savoury pork recipe, Lincolnshire Stuffed Chine is based upon an ancient recipe which is probably as old as the county itself. The 'chine' is an old butchery term for a pig's back. To make the stuffed chine, the pork would be cured in brine then scored. The slits would then be stuffed with a parsley-based concoction, after which the pork is strung and cooked as normal. When it is sliced, the pork has veins and streaks of green and the meat has absorbed the flavour of the parsley. Traditionally Lincolnshire Stuffed Chine used to be the centrepiece at the feast provided by the parents at their new baby's Christening, but nowadays you're more likely to be invited to sup on a full hog roast!

1Somerset is the traditional home of cider.2The cheese world's version of the Chelsea Flower Show.3Yes, that's a great name for a baker, isn't it?