A Holistic View of Cherries Content from the guide to life, the universe and everything 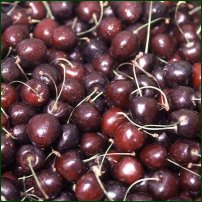 A small, usually reddish1 fruit, the cherry (Prunus cerasus) has been with us for around 3,000 years. Linked to fertility, divination, love and the sun, the cherry has a rich and vibrant array of beliefs and superstitions surrounding it. Here we look at how it can be used and what its believed properties are.

The ground-up stone of a cherry was believed to be a painkiller in the 15th and 16th Centuries and was prescribed for a number of ailments including chest conditions and stomach problems. It was also thought that eating six whole cherries a day would cure kidney stones and perhaps even prevent them. Even the usually discarded stalks had their uses. Herbalists of the time would brew them into a tea to treat bronchitis.

Native Americans used a variety of wild cherries called choke cherries in treatments for sore throats and coughs. The choke cherry went on to become an ingredient in cough drop sweets which were manufactured from 1847.

In Pagan belief, cherries are linked to Venus, goddess of love, as well as summer and the sun god. Perhaps it is this which has caused the cherry to be linked to innocence and virginity, hence such expressions as to 'lose one's cherry'. In parts of Europe it was once customary for young women wishing to know if they would marry to count the number of cherry stones left after a meal while repeating the words 'This year, next year, sometime, never!' until the last stone was counted and the answer revealed. It is seen as a sign of good luck for the year ahead in the Czech Republic if a cherry tree blossoms in late December, while in Japan the tree is considered sacred and it is customary at Japanese weddings for the bride and groom to drink an infusion of cherry blossom as part of the ceremony in hope of luck and fertility in the future. There is also the Japanese festival Hanami which features the age-old custom of viewing the flowering cherry, Sakura2. However, in France, the cherry, often bitter, is considered to bring ill fortune, and 'getting the cherry' has connotations of bad luck similar to 'drawing the short straw'.

Cherry wood is commonly used by practitioners of magic, such as Wiccans, in the making of ritual tools such as wands. Some other beliefs are that cherry juice is an aphrodisiac and will make a night of lovemaking extra passionate and that making a tea of cherries, vervain and chamomile will ease period pain.

Cherries are just as popular today as they have always been. Today, it is the anti-oxidants found in the skin of the fruit that are given credit for any health benefits they have rather than 'magic'. Anthocyanins, which give the fruit its red pigment, are believed to help with the treatment of arterial disease, some forms of diabetes and gout among others. The anti-inflammatory properties some believe to be found in cherries are said to be very beneficial in conditions such as arthritis and even premature wrinkles! The last thing credited to cherries is the ability to help one get a good night's sleep due to the hormone, melatonin, found in cherries, which helps to regulate our natural sleep cycle.

More than a pretty addition to the fruit bowl perhaps.

1They also come in shades of purple, yellow and white.2Sakura is now a common girl's name in Japan.