Traditional Christmas Pudding Content from the guide to life, the universe and everything 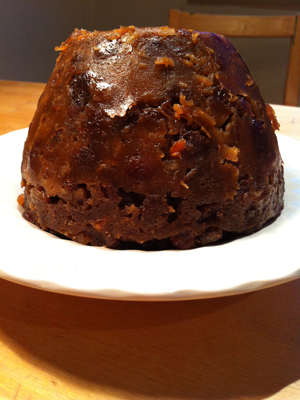 The Christmas pudding of today was completely different at its origin. It started life as a 14th-Century 'porridge' called frumenty. This combined the unlikely ingredients of boiled beef and mutton with fruits, wines and spices and was more like soup than a pudding. It tended to be eaten as a fasting dish in preparation for the Christmas festivities.

By 1595, it had evolved into the more recognisable dessert we know today. It was thickened using eggs and breadcrumbs, more dried fruit was included and the addition of ale and spirits gave it much more flavour. It grew in popularity until, in 1664, the Puritans banned it as a 'lewd custom'. It was, mainly due to its rich ingredients, described as 'unfit for God-fearing people'.

It remained in obscurity until 1714 when George I, who developed a taste for plum pudding, re-established it as part of the Christmas feast. This was despite the fact that the Quakers objected, calling it 'the invention of the scarlet whore of Babylon'. Having survived this vilification, it had fully established its place on the Christmas menu by Victorian times. It was around this time that the tradition of placing a silver coin, a thimble or even a ring was established1. Although most often depicted as a sphere - because of the original method of wrapping it in a damp muslin cloth before steaming - these days it is more usual to find it basin-shaped. Christmas Pudding is often set alight with a small amount of brandy, decorated with a sprig of holly and served with brandy butter, custard or cream... or all three! It may also be served cold or reheated by frying gently in a knob of butter.

Despite the ready availability of many good shop-made puddings, there is nothing quite so satisfying as making your own. Traditionally, this should be made several weeks before Christmas to allow the fruits to mature and the mix to form the gooey texture so indicative of a good pudding. A Christmas pudding will quite happily last, in good condition, for a year or more if kept sealed.

There are many family recipes handed down from generation to generation. Here is this Researcher's recipe, for your pleasure.

This will make enough to fill a 2 pint pudding basin.

There are two alternative ways to cook the pudding: steaming (the traditional way) and with a pressure cooker (much quicker and less vapour in the kitchen).

Bring a large pan of water to the boil. Gently lower the basin into the pan, taking care that the liquid doesn't come over the top. Set your timer clock for eight or nine hours and admire the wonderful smells after about three hours. Check every couple of hours to make sure that the water hasn't boiled dry and top up when necessary. If you have made your string handle, you should be able to lift the pudding out after the cooking time by using a wooden spoon... be careful though, a steam burn is very painful!

If you used greaseproof paper, remove it and replace with fresh. Foil covers can be safely left if they are intact. Place the pudding in a cool, dark place until Christmas Day.

If you steamed your pudding, you will need to allow another hour of steaming before serving. If you used the pressure cooker method, you can pop the pudding back in and cook for a further half hour... just fire it up when you serve the main course and it will easily be ready.

1Not recommended these days because of the dangers of contamination and choking.2Vegetarians can use vegetarian suet.3Dark ale - Guinness, or any dark beer, may be substituted.