Reducing Food Waste Content from the guide to life, the universe and everything 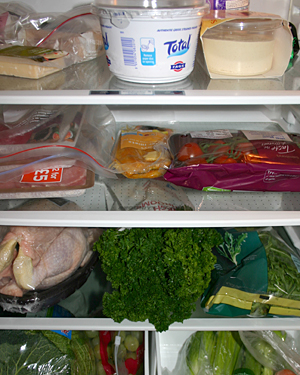 This is a collaborative Entry sharing some ideas on how to avoid food waste, by using up leftovers or food which is close to the end of its useful life.

Waste is a mammoth problem. It is estimated that the average UK family throws out usable food worth £50 each month. The environmental impact of this is enormous, so it makes sense to take steps to reduce it.

The best way to avoid waste is not to create it in the first place, so canny shoppers should plan their meals in advance, and only buy what they need. Don't plan for a full week though, as there will always be times when something happens and you don't need to cook that evening. Supermarkets' BOGOF1 offers may look attractive, but they will only save you money if you are actually going to use them. A useful habit to learn is to do some early preparation with your shopping as soon as you get it home: wash and dry the salad leaves and keep them in a plastic container. Chop some vegetables: you can buy packets of ready chopped onion to keep in the freezer, but there's no reason why you can't replicate this time-saver yourself at a fraction of the cost. Unwrap anything wrapped in plastic, and wash individual pieces of fruit so that they are ready to grab and go. If you're very organised, write the use-by dates on the items with a marker pen, so that it will be obvious which yogurt etc to use first. And put newer items at the back of the cupboard or fridge, bringing the older stuff forward.

But even the most organised households can find that they have some food that hasn't been used as quickly as planned. Here are some suggestions for making use of any leftovers and foodstuffs beginning to show their age:

Raw meat really needs to be used well before it starts to smell or turn green — there's no point risking food poisoning. Your fridge should be kept at a temperature of between 1-4°Celsius, and raw meat should be kept well away from other foods, and used up quickly. If you know that you won't be using that pack of mince or slab of chicken breasts in the next day or so, then stick them in the freezer now. Label and date them if you can spare 10 seconds, as that really does cut down on the amount of waste thrown out of the freezer as unidentifiable brown lumps.

Cooked meat is more versatile. A roast chicken can provide several meals: once the main roast has been eaten, strip the carcass and use the flesh in sandwiches, risotto or a curry. Boil the bones along with an onion, a bay leaf and some black pepper to make a chicken stock, and use that as the base for soup. Use whatever leftover veg you have from the roast, bearing in mind they won't need much more cooking, or else raid the fridge for a couple of carrots that are starting to wilt, some potatoes which have begun to sprout eyes, an abandoned half cabbage, etc. Chop the veg small, simmer in the stock until cooked through, blend if desired, or keep chunky. Another option is to prepare 'Monday Rice': cook some long grain rice in the juices and gravy left over from the Sunday roast, adding in small pieces of meat and the vegetables left over from that meal as well.

Bagged salad is one of the main culprits in the food-waster's home, as it has a shelf life of only a few days. Once it starts to wilt, liquidise any leftover green salady veg with a good glug of olive oil and some pine-nuts for a pesto alternative to be stirred into cooked pasta. After a barbecue or party, blend any leftover salad along with its dressing to make a dip for tortilla chips or crudites. And you can make your own tortilla chips from leftover tortillas — cut them into rough triangles, brush or spray lightly with a little oil, sprinkle on desired flavouring such as celery salt or paprika, and place them in a single layer on a baking tray. Pop in a hot oven for 10 minutes, or until crisp, but not burned.

Chopped tomatoes, spring onions, radishes can be added to a bowl of couscous for a meal in minutes. Larger tomatoes, sticks of celery or peppers can be stuffed with a rice mixture and baked.

Tomatoes that have lost their firmness can be chopped up and added to a pasta sauce, or sautéed with a handful of prawns and a dash of chilli flakes for something rather special. Cold cooked potatoes can turn an omelette into a Spanish tortilla, or mixed with some mayonnaise for a potato salad. Leftover mashed potato can become Irish potato farl, or the classic bubble'n'squeak. Mashed potato can also be used to make potato croquettes2, or as a topping for a fish pie or individual cottage pies. Mash is also good for thickening soups and stews. Most other veg lends itself well to being transformed into soup. Freeze in individual portions for handy lunches. Don't forget those labels!

Fresh herbs add fantastic flavour to dishes, but packets of coriander, flat-leaf parsley, and basil deteriorate really quickly. Pots of fresh herb last longer than the packets, but need to be kept watered. Herbs can be chopped and frozen in individual ice cubes ready to add to soups and stews, or can be added to a bottle of good olive oil to make a dressing for anti-pasti grilled vegetables.

Salsa sauce: remove any remaining shards of tortilla chip and use as a pasta sauce. A chopped hard-boiled egg and some capers and black olives turn this into a tasty niçoise sauce. Or spread over a pizza base and top with small pieces of cooked meats or thinly sliced veg, grated cheese and plenty of oregano, for a home-made pizza.

Tubs of cream cheese: mix with some fruit purée as an ice-topping for buns and cakes. Mix with some chopped olives (the stuffed with pimento kind) and pile into celery sticks, then cut into bite-size pieces for some colourful canapés.

Other cheeses can be combined to make a 2,3,4 or more cheese sauce to stir through pasta or pour over cooked cauliflower, broccoli or leeks. Or mix some chunks of cheese with other soft cooked vegetables such as butternut squash, sandwich between a pair of tortilla wraps and cook in a dry frying pan on both sides for quesadillas.

A surfeit of milk can be turned into pancakes. Sauces based on natural yogurt go well with grilled chops or hamburger steaks, while fruity yogurts make a good base for smoothies. Eggs nearing their use-by date (which is printed on the shell in the UK) can still be hard-boiled. A delicious sandwich filling can be made by mixing hard-boiled egg with hummus instead of mayonnaise.

The Best Thing Since...

It can be hard to work your way through a whole pack of sliced bread while it is still fresh, unless you're making sandwiches for a large family. You can store bread in the freezer and just defrost as required, though this is not great for sliced white loaves. Bread that is starting to lose its springiness is best combined with some slices of cheese in a toasted sandwich, or as French Toast.

If you have a glut of berries, combine them with the bread to make summer pudding, or for a winter warmer, make bread and butter pudding. Baguettes and ciabattas can go stale overnight, but can be revitalised as bruschetta. Cut into thick slices, rub with a garlic clove and a drizzle of olive oil, bake under a grill for a few minutes, then top with sliced tomatoes, pesto, or a slice of Parma ham. Or make a French Bread Pizza. Stale bread can be whizzed into breadcrumbs and used to coat meat or fish, as a topping for macaroni cheese, or added to rissoles, meatballs or burgers.

Make jam. Make a fruit coulis for pouring over ice cream or yogurt. Blend with some natural yogurt and a spoonful of honey for a breakfast smoothie. Freeze grapes and use them as a refreshing and lo-cal3 alternative to boiled sweets.

Whole pineapples look very tempting in the shop, but it can be difficult to use such a large amount of fruit. Chop the leftover flesh with some fresh coriander and mint, add a drizzle of olive oil, the juice of a lime, a little caster sugar and black pepper to taste for a salsa to serve with grilled fish or meat.

Lemons and limes are often sold in nets of four or more. Cut those you won't use immediately into slices or wedges and pop in the freezer in a see-though freezer bag4. Instant ice'n'slice in one!

These are among the worst offenders when it comes to food waste, largely because of the reluctance of shoppers to buy bananas singly. Once the skins have begun to turn brown you have a choice: they can either be put in the freezer, or used up immediately.

To use up a banana right away, blitz it with the juice of a lime, a good glug of light rum, a spoonful of golden sugar and plenty of ice for a daiquiri. Or make muffins or banana bread. If you have some under-ripe fruit or veg around, placing a banana with them will encourage them to ripen.

Once in the freezer the banana skin will continue to darken, but the flesh will remain as it was. Frozen bananas can be oven-baked straight from the freezer and served with a dollop of ice cream5, a sprinkling of nuts, or a drizzle of alcohol. Or all three! If it's summertime, you could barbecue them.

Some researchers swear that such a thing does indeed exist, and can be frozen in ice cube bags ready to be added to soups and stews. The rest of us are still laughing at the very notion.

Potato peelings, eggshells, heels of bread, etc can all be added to the compost heap. Scraps can be fed to your dogs, or to your backyard fox, but should be chopped into small pieces first. Don't feed dogs onions, cooked bones, grapes or chocolate6, and don't give them too much brassica vegetable.

Useful Things to Have

1Buy One, Get One Free.2Mix with some beaten egg, or they'll fall apart. Shape, using wet hands, roll in breadcrumbs, and bake or fry. 3Low calorie.4If you've opted for slices, freeze them on a flat tray first so that they don't clump together.5Baileys ice cream is particularly good with bananas.6Like there's going to be any of that left over!